After the Department of Health (DOH) declared a measles outbreak, celebrities have made their voices heard for the health of Filipino children.

The DOH said there has been a 550 percent increase in measles cases from Jan. 1 to Feb. 6 this year compared to the same period last year. At least 55 deaths were recorded in Manila since January. 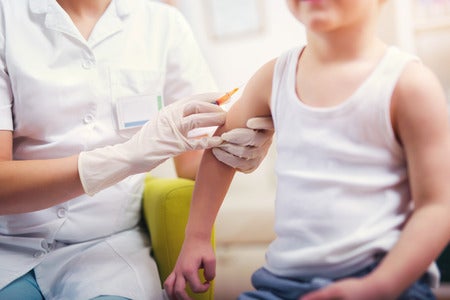 Some pointed fingers at a government agency which may have led to the vaccination scare.

“You can thank the fear-mongering of Persida Acosta et al for this measles surge,” said singer Leah Navarro. “She began it by making unfounded claims re: Dengvaxia and worsened things by doubting the effectiveness of vaccinations in general. Echoed by radio commentators.”

The Public Attorney’s Office, under the leadership of Acosta, have backed an investigation on claims that children have died because of anti-dengue vaccine Dengvaxia.

DOH said on January this year that none of the Dengvaxia-caused deaths have been confirmed.

“It’s time those who created the hysteria admit their mistakes and do corrective measures,” said musician Jim Paredes. “Filipino kids are dying. If they got vaccinated this would not happen.”

He also asked ABS-CBN, “Are you going to allow Noli De Castro and Ted Failon to go unpunished for creating the hysteria?”

The two broadcasters of “TV Patrol” have covered the Dengvaxia issue mainly by featuring the PAO and purported victims of Dengvaxia. The show regularly featured Dr. Erwin Erfe, PAO’s forensics head, who conducted autopsies on at least 14 kids who he said may have died of Dengvaxia.

Besides his findings being disproved by a UP-PGH panel who did an independent analysis, Malacañang and the DOH said last February 2018 that he is not a pathology expert.

“Liway” director Kip Oebanda made a jab at the present administration regarding the outbreak and a recent move to lower the age of criminal liability. “Wow DOH just confirmed a [measles] outbreak in NCR. At the rate we are going, we don’t even need to criminalize 9 year-olds anymore because kids will die before that,” he tweeted yesterday, Feb. 6.

Wow DOH just confirmed a measels outbreak in NCR. At the rate we are going, we don't even need to criminalize 9 year-olds anymore because kids will die before that.

“No child should be dying from measles. Please have your kids vaccinated,” urged lifestyle TV host Daphne Oseña-Paez, a UNICEF National Goodwill Ambassador, in a Feb. 3 tweet. “Most of these vaccines are offered for free to those who can’t afford.”

As of December, only 32 percent of Filipinos thought that vaccines were important, the World Health Organization found. This was down from 93 percent in 2015. Parents were hesitant to vaccinate their kids after the Dengvaxia scare in 2017, the report said.

Meanwhile, Department of Justice (DOJ) chief Menardo Guevarra said today, Feb. 7 that Acosta was “just doing her job” and had not meant to scare the public about vaccines.

The Dengvaxia controversy has led to charges against officials from the Aquino administration, including former president Benigno “Noynoy” Aquino III, for haste in procuring the anti-dengue vaccines.

President Rodrigo Duterte has ordered for a “vigorous campaign” for immunization following the outbreak. JB

Measles cases in Central Visayas up by 2,300% in January