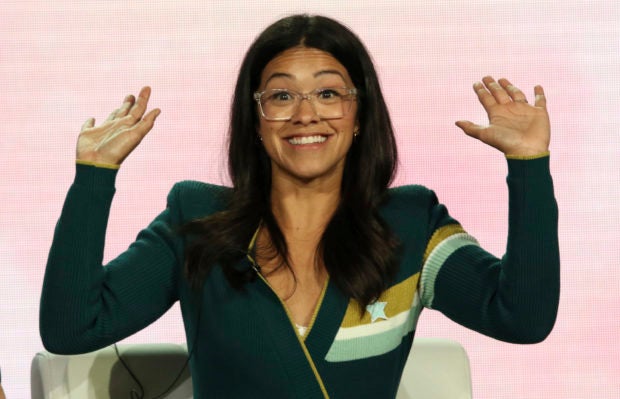 Gina Rodriguez speaks in the A Final Farewell to “Jane the Virgin” panel during the CW TCA Winter Press Tour on Thursday, Jan. 31, 2019, in Pasadena, Calif. Image: Invision/Willy Sanjuan via AP

The upcoming final season of “Jane the Virgin” is already drawing tears.

The CW show’s creator, Jennie Snyder Urman, said she’s crying in the editing room as she works on the concluding episodes of the show starring Gina Rodriguez.

The producer and actress grew emotional discussing the telenovela-style comedy-drama Thursday with TV critics. They were asked how they would look back on “Jane the Virgin.”

“How much representation matters, what it feels like to be seen,” Urman said of the show focused on a Latino family, a rarity on TV.

Rodriguez said the audience response affirmed her belief that young girls would be empowered seeing a Latina character. She’s encouraged to increase her influence through directing and producing, she said.

“You changed my life,” a tearful Rodriguez said to Urman.

“You changed mine,” the producer replied.

As for the final episode, Urman said she’s intent on providing “a real sense of closure.” She said she’s feeling pressure to say goodbye in the right way and wants to “stick the landing.”

The fifth season of “Jane the Virgin,” which begins March 27, has much to resolve. Last season closed with Jane, who’s contemplating marriage to Rafael (Justin Baldoni), learning that her late husband Michael (Brett Dier) may have made a miraculous comeback.

The mystery of Michael’s apparent return will be explored in early episodes of season five, which will conclude this summer. The finale date has yet to be announced.

There may be a spinoff, a telenovela anthology series with Rodriguez and Urman serving as executive producers. CW has ordered a pilot for series consideration, with cast members yet to be announced. Rodriguez will be heard if not seen on it, narrating stories based on fictional novels written by her “Jane the Virgin” character. CC

‘Real change’ for Latinos in Hollywood? Gina Rodriguez hopes so