MANILA, Philippines — Filipino band Agsunta has announced that it is “signing off.”

The band revealed the news in a video titled “Agsunta, Signing Off” posted on their YouTube channel on Wednesday. 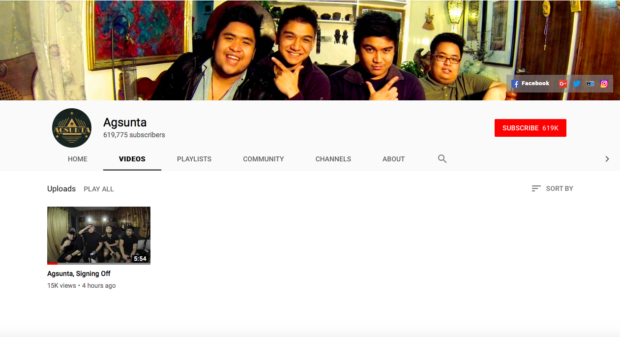 In the video, the band’s vocalist Jai Singson shared that they have been receiving “harsh comments” on social media.

(It’s not really a secret that there have been harsh comments directed at us. There are those who insult us, those who have expressed anger, and those who really speak up. It’s just nice to hear because it’s in English.)

(The comments were from different people, including our friends and followers — young and old, our parents, our colleagues in the industry and those who are not from the industry.)

Singson said they have been ignoring the comments because they respect the right of other people to voice their opinions.

(We haven’t said or done anything. We just kept quiet, not because those who expressed anger and comments were right, but because we respect the voice of other people.)

(So after several discussions — we’ve  argued and talked about our goals as a band — our vision as a band,  we decided to tell you this because you deserve to know.)

“Kaya masakit man, at mahirap man, kailangan na muna namin itigil to. Kami naman muna (So even if it hurts and it is difficult, we need to stop this),” Singson said. “It was 4 years of solid OPM. Ilang taon ng pagsasama at pagpapadama sa inyo ng pagmamahal naming apat, ang pagmamahal nating lahat sa OPM (several years of togetherness and expressing our love for OPM).”

Singson, however, clarified that they are not saying goodbye.

Nonetheless, Singson promised they will always create music for the people who have supported them

“Isa lang ang pangako namin, patuloy kaming gagawa ng musika para sa inyo (We can only promise one thing: we will continue making music for you),” he said.

INQUIRER.net has reached out to Agsunta’s talent manager, PPL Entertainment, to clarify if  “signing off” meant the band is leaving social media, going on a hiatus, or disbanding, but has not received a response as of posting. /ee