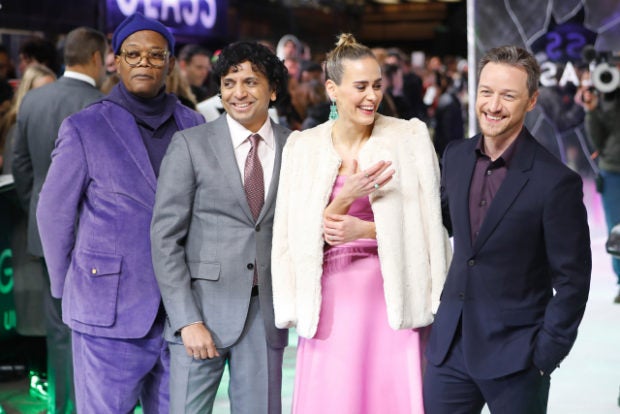 Financed and directed by M. Night Shyamalan, “Glass” is a sequel to his “Unbreakable” (2000) and “Split” (2016). It stars Bruce Willis as a superhuman locked in a psychiatric ward with a mass murderer — “Mr. Glass” — played by Samuel L. Jackson.

The second and third spots at the box office remained unchanged from last weekend, with STX Films’ “The Upside” earning $12.2 million and Warner Bros.’ “Aquaman” hauling in $7.4 million in its sixth week out.

“The Upside” stars Bryan Cranston as a wealthy quadriplegic who hires ex-convict Kevin Hart as his caretaker. The New York Times calls the tale, a remake of a French film, “impolitic” but “surprisingly winning.”

“Aquaman,” starring Jason Momoa as the underwater king, has now generated $1.09 billion in global box office revenues, making it the largest DC Comics adaptation of all time, according to BoxOfficeMojo.com.

A new release from Fox, “The Kid Who Would Be King,” placed fourth with $7.3 million for the three-day weekend. That would be a “potentially disastrous result for a film that cost over $60 million” to make, according to Variety.

The movie stars Louis Ashbourne Serkis (son of Andy Serkis, Gollum in the “Lord of the Rings” trilogy) as a boy living in modern times who stumbles upon King Arthur’s legendary sword Excalibur. The film has drawn largely positive reviews.

In fifth spot — and hanging strong in its seventh week out — was Sony’s “Spider-Man: Into the Spider-Verse,” with takings of $6.2 million.