The Filipino in Shay Mitchell 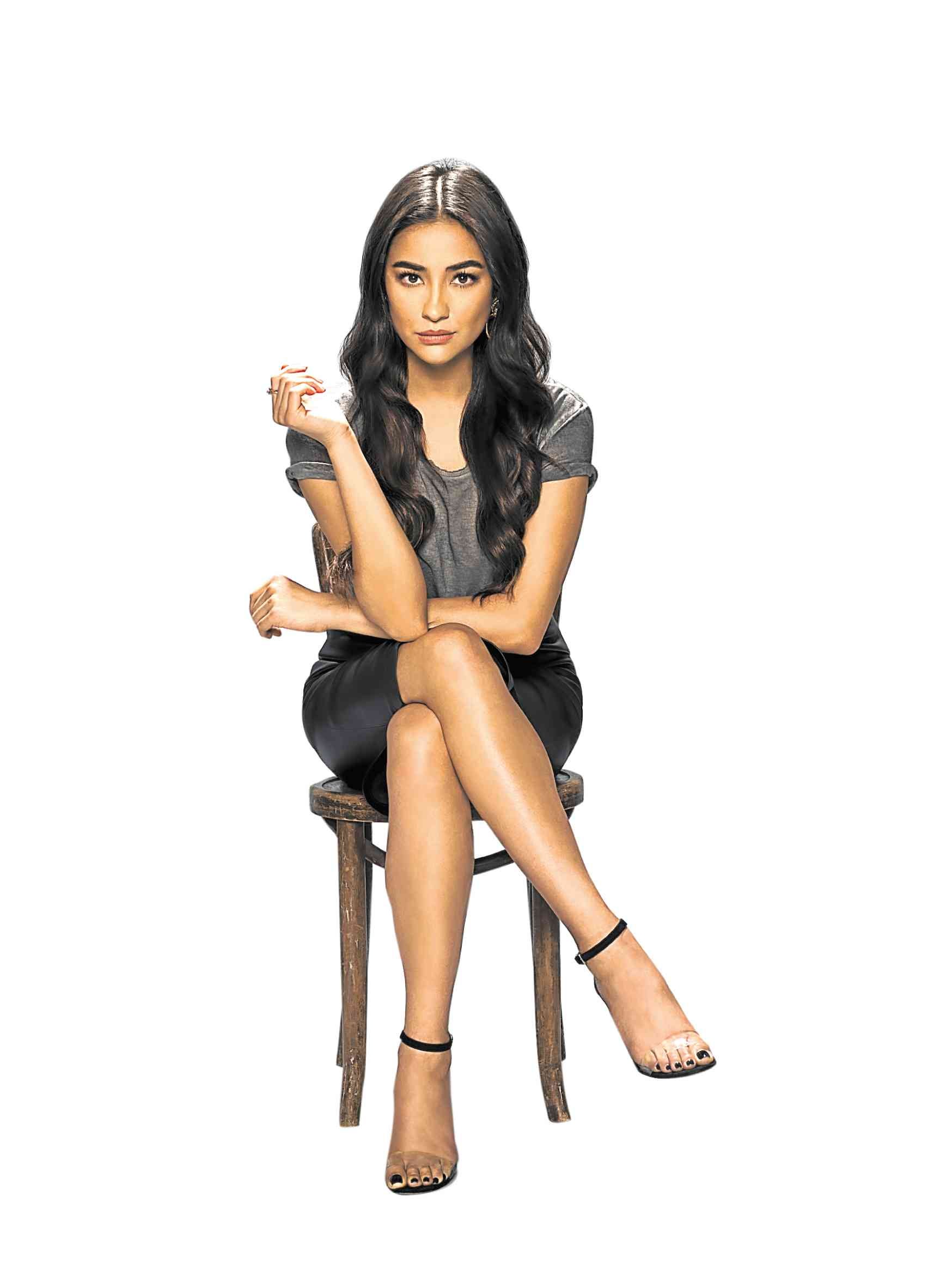 It isn’t every day that we cross paths with Hollywood stars with Pinoy ancestry who genuinely embrace their Filipino roots.

When we met Shay Mitchell last Monday, the lovely actress, whose mother Precious Garcia left her hometown in Pampanga at age 19 to relocate to Canada, even asked the people who were with us in the interview room at the Peninsula Manila, “So, who’s the biggest actress in the Philippines right now—is it still Anne Curtis?” 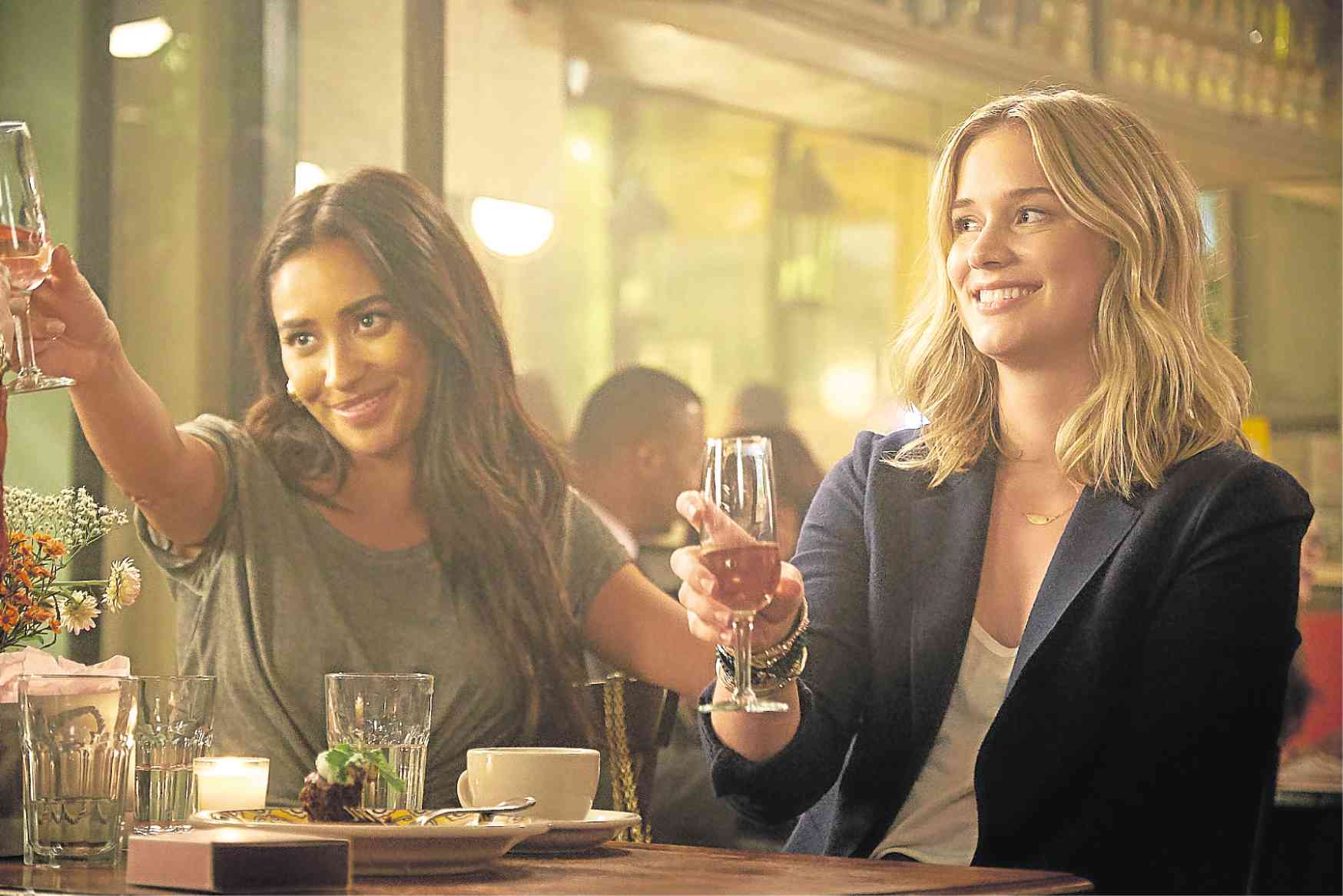 Shay Mitchell (left) and Elizabeth Lail in “You”

While it was Shay’s third time in Manila (she first visited the country six years ago), it was Penn’s first, so she had to introduce him to halo-halo and pansit.

Shay beamed when we said, “Welcome home,” and gamely played along when we reminded her of her Instagram post about current Miss Universe Catriona Gray and said, “Maybe you could be the Philippines’ next Miss Universe?” “Oh my God, don’t say that,” she laughed then winkingly enthused, “Catriona … watch out!”

She said it was a blast playing Peach because she has always had more fun essaying “dark” characters. “I liked playing her because she’s very different from who I am—we’re polar opposites,” she explained. “I’d like to think that I’m a nice person, because I follow the rules, and I always see the good in people.

“It’s fun ‘playing’ someone nasty, who can say things without worrying [about its repercussions], because you don’t want to be that person in real life.”

And when asked about what it was like behind the scenes of “You,” or during long lulls on set, that’s when she started talking about her famous cousin, Broadway star Lea Salonga.

Our Q&A with Shay:

Despite her imperfections, Peach is fun to watch. How did you channel her dark side? Peach had really funny one-liners; she’s just funny in her own way.

But I also saw that she was insecure, so she wasn’t being nasty just to be nasty. I saw through all that and understood her life and how she grew up.

I think there are many layers to Peach, but her meanness came out of her insecurities.

I also had experiences with Peaches in my life (laughs), although not in that level of meanness. I want to be friends with her for a reason. I want to be honest with her and tell her, “You know you’re mean, and it’s not nice. You should go to therapy and work out your issues.”

What’s good about the show is that it’s very clear where Peach is coming from, and why she is who she is. Yes, because if that isn’t clear, the audience would  say, “You’re just nasty. OK, bye!”—and that would be it.

The reason why people want to see more of Peach is because they empathize with her and see her softer side. To a certain degree, they almost understand why she is who she is.

She delivers a very funny line in a party scene where she asks Joe (played by Penn), “You’re not allergic to brown people, are you?” Was that improvised? Yes, that was very funny—and I wish I came up with that line—but, no, that was in the script.

There’s another line that I love, where she says she doesn’t want any male presence around her—and, it has become a meme. Now, all my lesbian friends go, “That’s how I feel, girl!”

What’s your reaction to people romanticizing Joe’s creepy and twisted character? I think they’re actually romanticizing Penn Badgley. They can’t be romanticizing his character because if you put an unattractive person, whose life you didn’t know was real or not, you wouldn’t want him to come visit you at all!

So, that’s the difference. People are just fascinated with Penn, because they know he isn’t creepy in real life. So, it’s all in their imagination, and Joe is just a made-up character. No one would want to meet such a creep in real life. 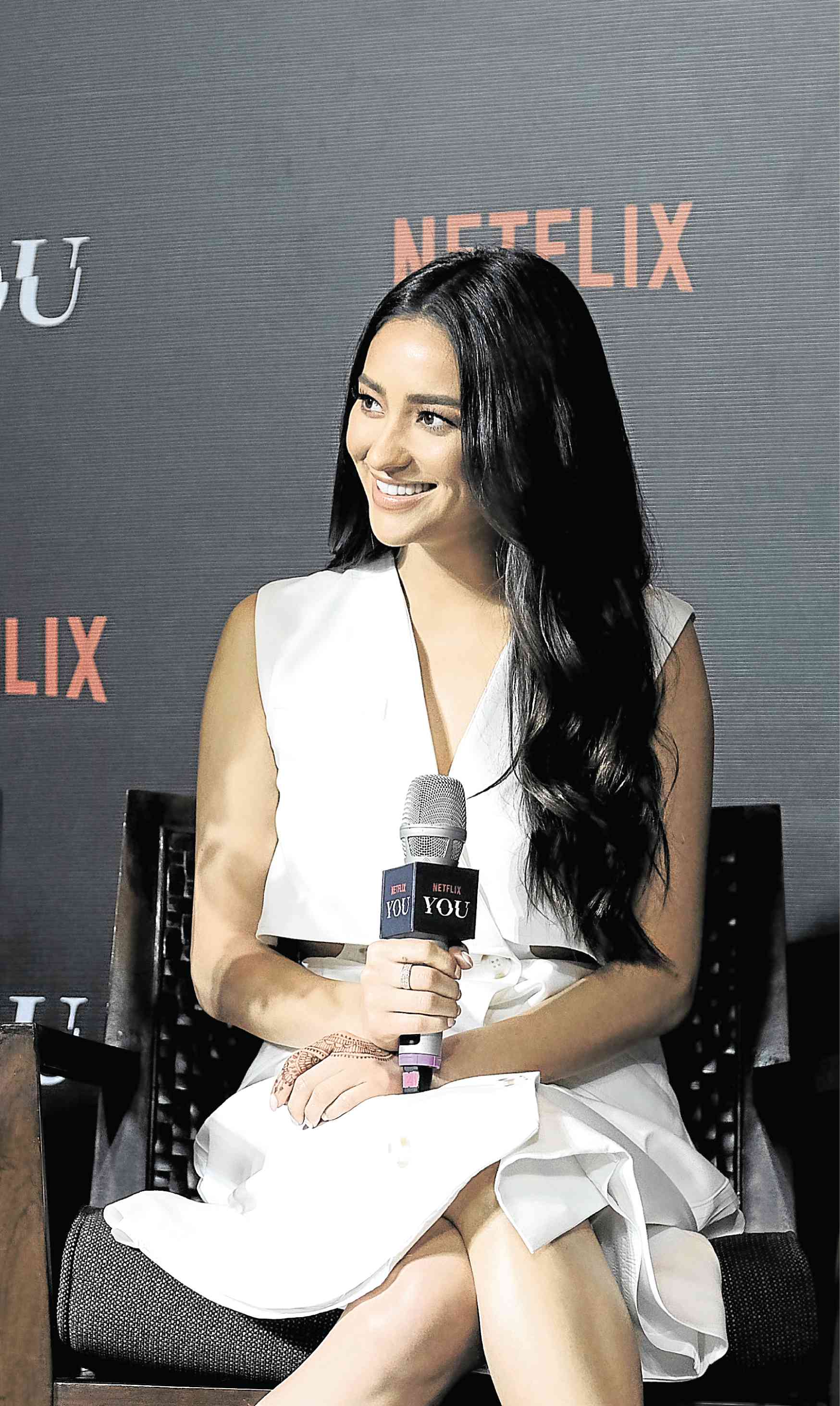 Have you ever overly stalked someone on social media?  Yeah, like 100 percent. But there’s a difference: To stalk people is to actually follow them around—and I’ve never cared to do that for anybody.

I follow people on social media to get as much information about them—and I’ve done that several times.

Producer Sera Gamble told me that she was attracted to the tension between the romantic and the creepy. Was that what drew you to the material? Do you have a favorite scene? I don’t know if Peach’s scenes with Beck (Elizabeth Lail) were romantic or kind of sexy, because they’re supposed to be good friends. Beck is so innocent and had no idea about the real intention of Peach, who knew that she truly cared about Beck in a different way.

But that didn’t just happen one night. It was an interesting twist to not just have Joe’s character be obsessed with Beck in a romantic way, but also have Peach feeling the same way.

My favorite scene is the one with Beck just before she decides to leave Peach’s house, because that’s when you start to see that craziness in her—you see the switch in Peach. 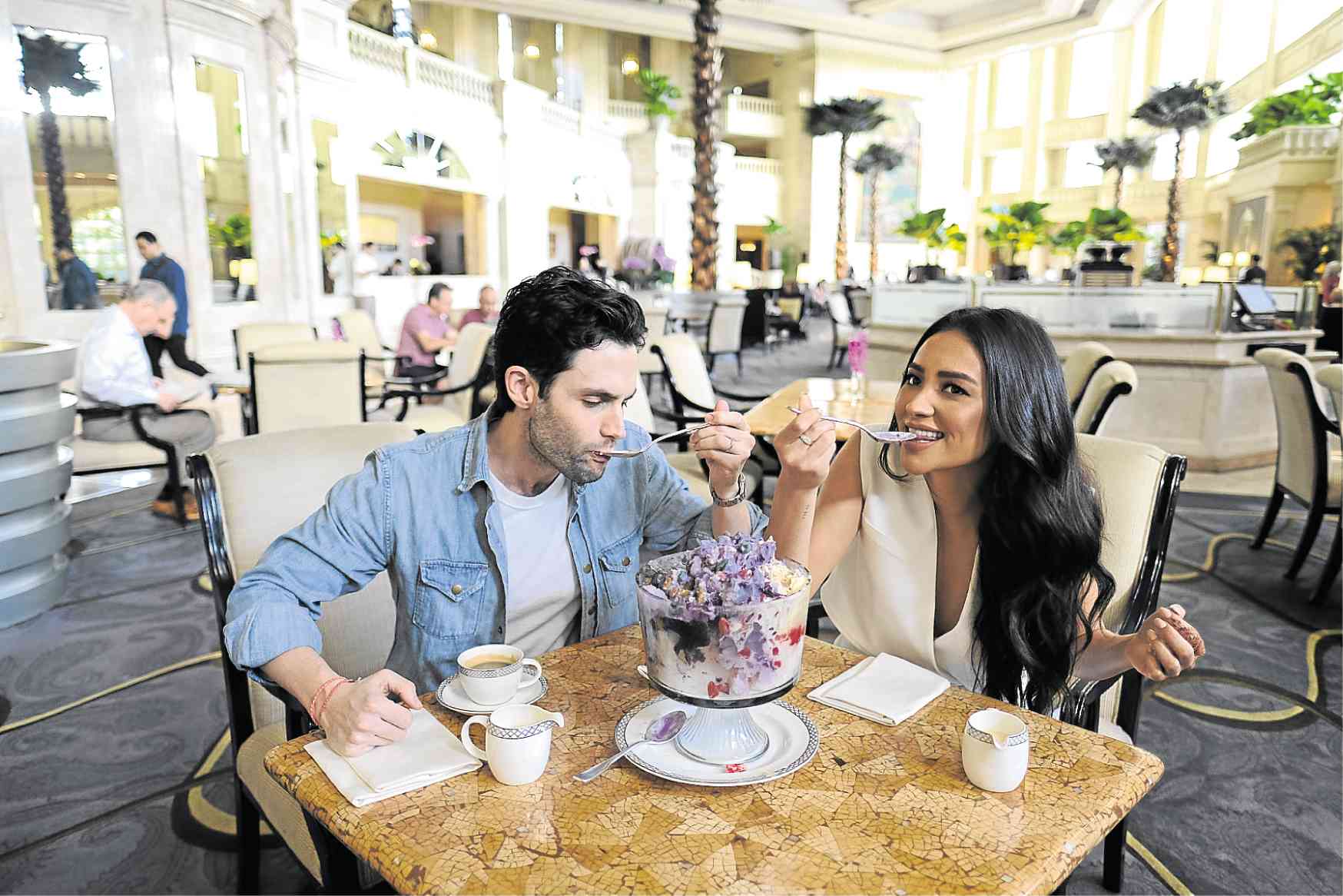 Penn Badgley and Shay Mitchell sharing a “halo-halo” in Manila.

Will we be seeing you in Season 2?  Maybe you’ll be seeing her twin sister, Lychee (laughs). I mean there are a lot of ways to do that these days, like flashbacks. We definitely did a lot of that in “Pretty Little Liars,” and even in this show. So, you never know…

What is the craziest thing you did for love? Every time I cook … or clean up (laughs)? Oh God, it makes me feel like a bad person that I haven’t done anything crazy for love. Maybe by just being thoughtful, or by showing up at the airport. I’ve actually done crazy things in my own life, but for somebody else, no.

What are your thoughts on people’s obsession for finding their One True Love? It’s everybody’s goal, for some reason. It’s just that I was raised differently. My parents are still together. They have an amazing love story, but they instilled in me the idea that the end goal  isn’t to find that “other person,” but to live the best life that I can have.

But, I would never have the kind of life where I’m just striving to look for “the one” to complete it. I am already complete—I was complete when I came out of the womb, and I will be complete when I go under the ground.

Any fun behind-the-scenes stories? It involves the fact that the other girls [in the cast] are obsessed with Broadway and musical theater, while Penn and I, not so much. It’s funny; they’re always talking about the musicals that they’ve just seen.

My second cousin is Lea [Salonga], but I don’t share the same talent and voice as she does.

One of the funny moments was when they found that out—and they couldn’t believe it. So, Penn and I would be so funny during the shoot; we would greet each other, singing, so I’d go, “Hi Penn. How are you?” We had the best time on the set!

Since this is Penn’s first time in the country, are you planning to take him around? I wish I could, but we don’t have a lot of time here. So, I can only send food to his hotel room. “Here’s pandesal, here’s pansit.” But even I messed up, like I had to ask my cousin the other day because I ordered pansit canton, but what I really wanted was pansit bihon. Then, I ordered lumpiang ubod, but I really wanted lumpiang shanghai.

All this talk about local dishes makes you sound very Filipino …  Yeah, I love certain Filipino dishes, but I’m more on the vegetarian side, so I don’t do a lot of the adobos, except as sauce on rice. I also don’t do the purple egg, or the egg that hasn’t hatched yet (balut)—that’ll be a challenge for me! I’m only half-Filipino when it comes to that—my other half says no (laughs).

As for my mom, she eats everything. She left the Philippines when she was 19, so she speaks [a hybrid of] English and Tagalog, which she actually doesn’t know anymore. All the other members of my family, as well as her sisters—all 9 of them—still speak Filipino. My mom, on the other hand, is like “white Filipino,” who speaks “Tagalog-ish”—that’s what I call it.