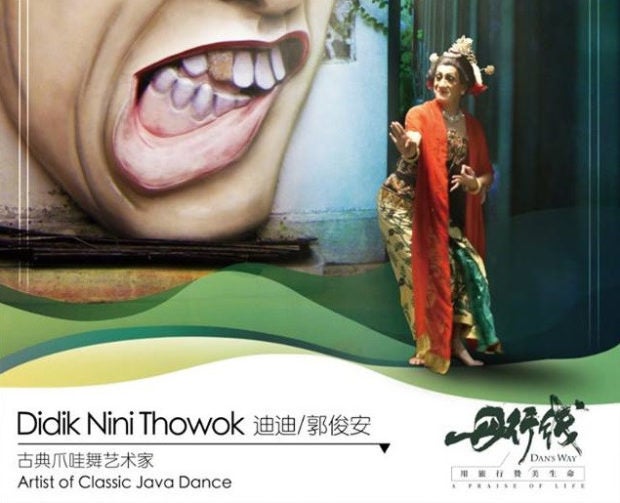 Didik Nini Thowok is among the 10 figures featured in the ‘Dan’s Way’ documentary. Facebook/ASEAN via The Jakarta Post/Asia News Network

JAKARTA — Celebrating 2019 as the China-Asean Year of Media Exchanges, China launched the cultural documentary Dan’s Way in Jakarta on Monday.

Hosted by Chinese actress Zhu Dan, the documentary presents the beauty of the people, culture and natural landscape of Asean countries, while at the same time eulogizes the universal values of love and life. Aiming to serve as a bridge for cross-cultural communication, the documentary plans to cover all 10 Asean member states.

Each country chapter is to include 10 episodes devoted to 10 characters. The documentary makers have completed the Indonesian chapter and plan to move to other Asean countries in the following years.

In his opening remarks in Monday’s ceremony, Chinese Ambassador to Asean Huang Xilian said most of the figures in the documentary did not have prominent backgrounds but they were deemed inspirational because of their courage and perseverance. “The documentary highlights the perspectives of respect in a world of great diversity. It shows what we can achieve with our cultural differences,” he added.

The documentary videos have been aired on Chinese video platform Xigua since November 2018. They are to continue to be screened on the channel and other video platforms in China. Dan’s Way was produced by Beijing Eleven Media Co. Ltd. in collaboration with the China Central Fund of News and Documentary Film, Shanghai Dragon Lord Pictures Co. Ltd. and Zhu Dan’s production company.

The Indonesian chapter of Dan’s Way shone a light on 10 people. They were Raka Rasmi, an inheritor of Legong dance, Suyanti, a wildlife protection expert, Robin Lim, founder of the Health of Mother Earth Foundation, Sri, a primary school student and the daughter of a sulphur miner, Rusidah Badawi, a photographer, Didik Nini Thowok, an artist of classic Javanese dance, Lucienne K. Anhar, an art collector, Firliana, a writer, Leu Suprihatin, one of the Istiqlal Mosque’s cloakroom attendants, and Elora Hardy, creative director of the eco-friendly bamboo architecture firm, Ibuku.

Host Zhu Dan said the experience of making the documentary left her with feelings of awe and admiration. “I hope that the people of China can now know the things that prior to this were unknown to them, such as the Borobudur Temple. I also hope the rich culture and beauty that have touched my heart will also touch other people’s hearts,” she said.

The China-Asean Year of Media Exchanges aims to promote more exchanges and cooperation among the people. A variety of events are to be held in China and Asean countries within the year.