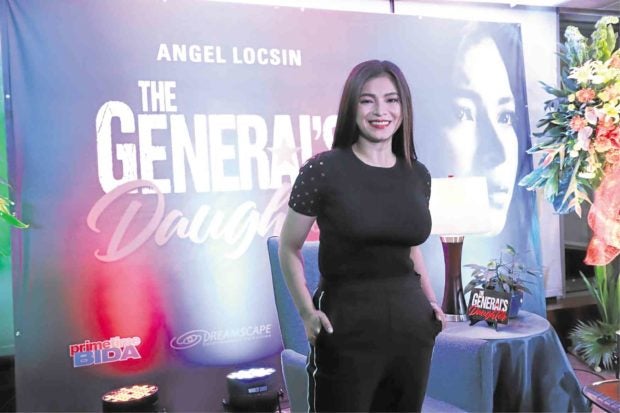 “It seems like I still have something to prove,” said actress Angel Locsin on why she still agreed to do action scenes in her latest teleserye “The General’s Daughter” despite her spinal injury.

Angel had a spine operation in 2015. Her condition forced her to quit from the project that would once again bring the superheroine “Darna” to the big screen. Her intensive training triggered the development of a disc bulge in her spine.

“I want people to see that I can still do it,” she told reporters on Thursday. “I often get messages from people with the same condition, those with spine problems. I’m hoping that when they see me doing what I’m doing, this will give them hope. They will say that it’s not yet the end for them. That life won’t be as boring as they expect it to be without physical activities.”

Angel, however, said she would always make sure to do all her stunts and action scenes with extra caution.

“Here, you will see me punch and kick people. I am now extra careful. I meet with my physical therapist the night before I am scheduled to do an important scene. I also use cold or warm compress,” she said. “I feel a different kind of fulfillment whenever I get to do my routines. It gives me a different kind of happiness.”

To prepare for her character in the series, an army nurse corps, Angel said she immersed in military camp life. “I studied military drills. I also spent a couple of days in the hospital. The head nurse of the AFP (Armed Forces of the Philippines) had been very gracious to us,” she said.

She also learned how to ride the motorcycle, as well as train in martial arts like krav maga and muay thai. “At the time, we still didn’t know what kind of fighting style would be needed,” she explained.

“I also studied knife fighting. It’s violent, but it looks beautiful onscreen — you look like you’re dancing,” she said.

Angel admitted getting cuts and bruises while taping. “That’s normal. It’s not a big deal,” she said.

The actress insisted on doing all her stunts — except one.

“I really asked for a double. I was supposed to jump into the murky waters of Manila Bay. This is not because I’m afraid of the water, kasi po maarte ako, I was afraid to contract skin disease,” she said, laughing.

“When I looked down from the ship we were at, I saw dead fish floating. I said, ‘Kung ang mga isda nga ’di kinaya, ako pa kaya. Hindi naman ako tiga-tubig!’” Angel recalled. “We all agreed na dayain na lang.”