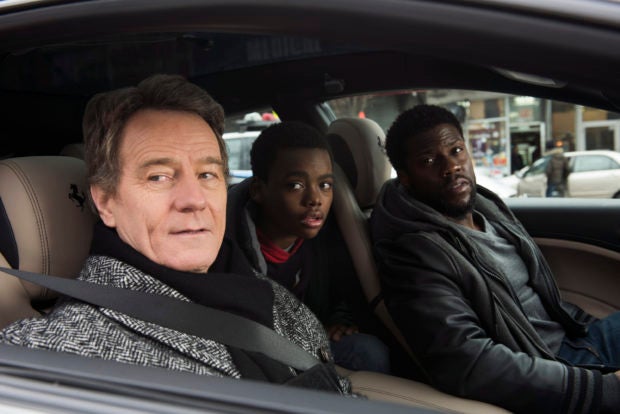 This image released by STXfilms shows Bryan Cranston, from left, Jahi Di’Allo Winston, and Kevin Hart in a scene from “The Upside.” Image: STXfilms/David Lee via AP

NEW YORK (AP) — Kevin Hart isn’t hosting the Oscars, but he’s got a number one movie. “The Upside”, starring Hart and Bryan Cranston, surpassed expectations to open with $19.6 million in ticket sales, according to studio estimates Sunday.

The strong performance of “The Upside” pushed “Aquaman” to second after the aquatic superhero’s three-week reign atop the North American box office. Warner Bros.’ “Aquaman” still passed $1 billion worldwide over the weekend, becoming the first DC Comics release to reach that mark since 2012’s “The Dark Knight Rises”.

“The Upside” opened on the heels of several weeks of Oscar drama surrounding Hart. The comedian last month withdrew from hosting the Academy Awards , just days after being named emcee, when he initially refused to apologize for years-old homophobic tweets.

On the publicity trail for “The Upside”, Hart repeatedly dismissed the Oscar controversy, saying he was “over it,” while flirting with the possibility of returning as Oscar host — something for which talk-show host Ellen DeGeneres, in particular, advocated.

Whether all that attention helped raise the profile of “The Upside”, a remake of the 2012 French comedy “The Intouchables”, was difficult to extrapolate, though it surely didn’t hurt. Ticket sales were almost twice industry forecasts. The film received poor reviews (40 percent fresh on Rotten Tomatoes) and was slammed by some critics for trading on the kind of gay panic humor that Hart was forced to apologize for.

Neil Burger’s film, which cost about $35 million to make, stars Hart as an ex-con who becomes a caretaker for a physically disabled author (Cranston). It was originally to be distributed by the Weinstein Co. Harvey Weinstein premiered the film at the 2017 Toronto International Film Festival just weeks before the many allegations of sexual harassment surfaced against the movie mogul.

STX Entertainment picked up the movie, which on Sunday handed the five-year-old startup studio its first no. 1 release at the box office. Launched in 2014 with a mission to make the kind of mid-budgeted, star-driven films the studios have increasingly abandoned, STX has had some successes (“Bad Moms”, ”The Foreigner”, the critically acclaimed “The Edge of Seventeen”) but has often struggled to find breakout hits. Last year’s “The Happytime Murders”, with Melissa McCarthy, was one of the 2017’s most glaring flops.

STX’s Motion Picture Group Chairman Adam Fogelson pointed to strong audience reaction (an A CinemaScore) and downplayed any effect of the Oscar chatter on “The Upside”, noting that Hart “is in the culture constantly for tons of stuff.”

Fogelson called the no. 1 result a symbol of larger success for STX’s business model.

“We have been profitable on the overwhelming majority of our movies for more than a year and a half. No one needs to cry for us, but I don’t think the company gets credit for that because the way we’re doing that is so different from how traditional Hollywood has operated,” said Fogelson. “This result is just an exclamation point on the fact that this can work not just in an STX way but in an old Hollywood way, as well.”

Paul Dergarabedian, senior media analyst for Comscore, credited STX with accurately reading the marketplace. The studio worked with the filmmakers to recut “The Upside” from an R-rated version to make a more broadly appealing PG-13 one.

“It’s not for the faint of heart to start up a new studio and it can take a lot of time to get things rolling,” said Dergarabedian. “But all it takes is one film to emotionally or symbolically get things rolling.”

The two biggest winners at last Sunday’s Golden Globe Awards — “Bohemian Rhapsody” and “Green Book” — both saw a bump. Fox’s Freddie Mercury biopic, which increased its theater count with hundreds of sing-along screenings, was up 35 percent with $3.2 million. The best comedy/musical winner “Green Book” went up 16 percent with $2 million in its ninth week of release.

Next week will see the release of M. Night Shyamalan’s “Glass”, which is expected to open with $50-70 million. Advance reviews, however, have been poor, ranking 38 percent fresh on Rotten Tomatoes.