It will not be long until Team Kramer gets new digs after over a year of construction. 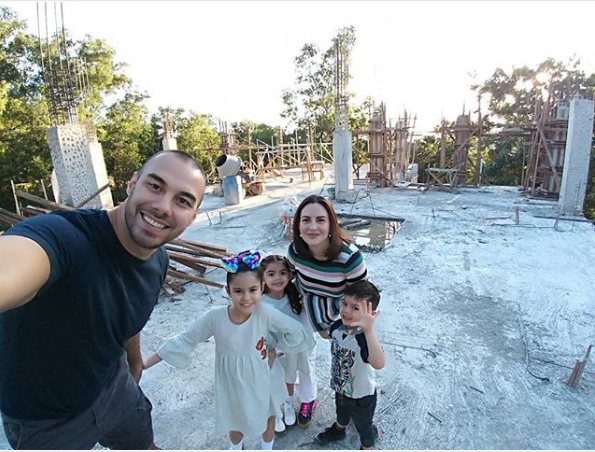 The Philippine Basketball Association (PBA) cager first posted about building a new house in December 2017 when he showed that the basement was finished.

Since then, more floors and rooms have been added to the house, fit for a family of five — and maybe more.

To mark the progress of construction, Doug shared pictures of the house from February 2018 and January this year, last Saturday, Jan. 12.

Feb 2018 – Jan 2019! What almost a year from construction to finishing looks like! Konti na lang! Here's a peek from the back part of our home! 😍 Dreams do come true!👆🙏

The 2018 pictured showed him, Chesca and their three kids outside the foundations of the back of the house. When he first posted the picture last year, Doug explained that it would soon feature an infinity pool, the children’s playground, a treehouse and a garden.

A picture from this month showed him and his wife sharing a kiss outside their nearly finished home which already has some portions painted.

Meanwhile, Chesca shared pictures of some interiors of the house and heaped praises on her husband who had undertaken the project mostly on his own.

The view from our masters bedroom balcony. 😍 A view that I will very soon be waking up to. I am already imagining all the many new memories we will be making here.😍 The last photo is my favorite place in the house. Love all the different textures and materials used. This makes me look back at the time we were building our first home… I can still remember it like it was just yesterday. Here we are again, standing in front of a new home that we will be moving in in a few months. I am so thankful that I have such a hands on husband when it comes to the construction of our house and making sure everything is meticulously done. I have nothing to do with this. I just come with him every now and then and I am surprised each and every time. Ps. Don't worry I won't fall. There is a roof right below me.

Chesca stood on the edge of the balcony of their master’s bedroom to show the refreshing view of nature that she was excited about. She also shared her favorite part of the house which featured a wood ceiling and a brick wall. “Love all the different textures and materials used,” she wrote.

She could not help but wax nostalgic at the milestone. “This makes me look back at the time we were building our first home…I can still remember it like it was just yesterday.”

“I am so thankful that I have such a hands-on husband when it comes to the construction of our house and making sure everything is meticulously done. I have nothing to do with this,” she said.

Last December, the Kramer patriarch marked 15 months of construction in an Instagram post and said there were three months to go until it was finished.

Inside the dream home

With Doug managing the project, he decided on the house’s “modern rustic feel,” he shared last May on Instagram. He also shared that he was involved in planning the shape of the house down, to each material and tile.

Since then, interiors of the house that he has shared so far feature different kinds of wood and bricks. 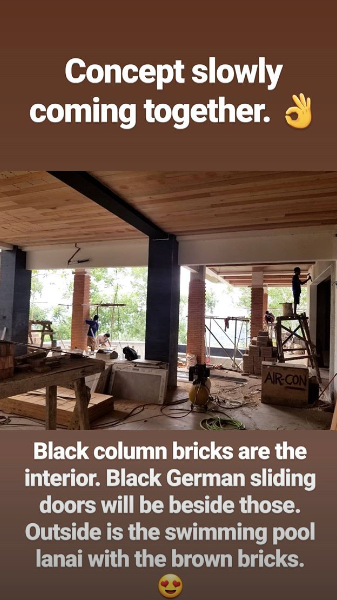 Interiors of Team Kramer’s house as of late 2018. Image: Screengrab via Instagram/@dougkramer

Last March 2018, the basketball player shared the home’s exterior and said that it had a “basement man cave.”

While Doug has his “man cave,” Chesca also got her way with a walk-in closet. Last April, Doug revealed it would be even bigger than their master’s bedroom and would also have another walk-in space just for her shoes.

At present, Chesca and her two daughters, Kendra and Scarlett have their own walk-in closets, as per a Yes! report in 2016.

Doug ensured too that there will be entertainment for the whole family through a home theater which he showed was under construction last June.

Sneak peek into my future home cinema. 😍 I wish I can show you my peg but I won't so it'll be a surprise. Haha! Right now, we're wood cladding it for sound proofing and design. Theme.. Rustic modern with black, brown as the only color you will see. 3 rows this time so 20 people can comfortably watch. Captain chairs, love seats and comfortable sofas in each of the rows. If you can see the red rectangle drawing behind the wood, that's the marking for the 180 inch 2.35 aspect ratio screen with a 4k resolution laser projector. To top it off, the high definition surround system will be 12.2.4. Meaning 12 surround speakers plus 2 Subwoofers plus 4 ceiling dolby atmos speakers. No doubt I'm having fun designing this cinema from the ground up. Trying my best to future proof it despite how fast tech is evolving. My family and I love watching movies together, and to avoid the rush and heading to the mall always, my goal is to make this a level higher. Hopefully! :) Can't wait for the final product! 😊

Aside from “captain chairs, love seats and comfortable sofas” for 20 people, it will also have a 180-inch screen and a high-definition surround sound system. Their current home theater has a 136-inch screen.

“My family and I love watching movies together, and to avoid the rush and heading to the mall always, my goal is to make this a level higher,” he explained.

Sustainable energy is another important feature of the new place: solar panels are installed to help cover its electricity needs.

The family currently lives in a spacious three-story home which has modern wooden interiors. Doug announced it was for sale in August 2016. JB