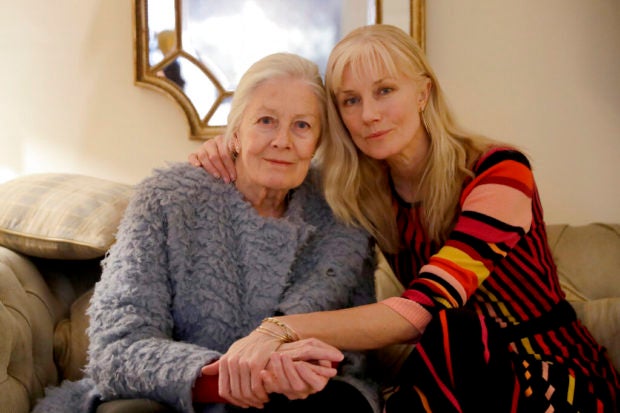 British actresses Vanessa Redgrave and her daughter Joely Richardson pose for portrait photographs before an interview with The Associated Press in London, Tuesday, Jan. 8, 2019. Vanessa Redgrave first saw “The Aspern Papers” as a child, when her famous father adapted it from a Henry James novella and played the male lead. Decades later, Vanessa Redgrave acted the role of Miss Tina on stage, now she is playing the forbidding grande dame Juliana Bordereau in a movie version, this time with her daughter Joely Richardson cast in the younger woman’s role. Image: AP Photo/Matt Dunham

LONDON — She first saw the play as a child, when her famous father adapted it from a Henry James novella and played the male lead. Decades later, Vanessa Redgrave acted the role of Miss Tina on stage.

More time has passed, and now she is playing the forbidding grande dame Juliana Bordereau in a movie version of “The Aspern Papers” that opens Friday in the United States, this time with her daughter Joely Richardson cast in the younger woman’s role.

“I’ve been through every version of it,” says Redgrave, whose blue eyes still pierce. “My father was in it with two wonderful actresses, which I saw a number of times. Then I was in it much later as Miss Tina, and suddenly I get the chance to be this ferocious Bordereau, the old lady, which is kind of the full stretch of the bow, if you see what I mean.”

Redgrave, at 81, still radiates the outspoken intelligence that has characterized her film and stage work, softening only when looking into the eyes of her daughter — “She’s so beautiful,” Redgrave coos — or cuddling her poodle-Pomeranian, Zep.

“It was heaven working with Joels,” Redgrave says, pronouncing her daughter’s nickname as Jules.

It is the fourth time the two have paired, a sequence that includes Redgrave joining her daughter on the popular TV series “Nip/Tuck” in a number of episodes, including one in which Redgrave sought a facelift from one of the two handsome young plastic surgeons at the heart of the show.

At the time, Richardson — one of the three stars — worried that her mother might not cope well with the demands of weekly television, including the need for quick memorization of dozens of pages of scripts.
Her mom thrived, of course, even if she’s far better known for her dramatic work onstage.

For Richardson, working with her mother highlights what she calls “that Mom-Vanessa thing.” It’s what happens when your mother has been famous your entire life — and has set a standard in the profession you chose.

“It’s so funny, ’cause obviously mom’s mom to me, but when I’m talking about her in a professional capacity, I tend to go into calling her Vanessa,” Richardson says. “When your mother’s public and private, it’s a two-name deal.”

Working with her mother has been revelatory, says Richardson, who has also shared screen and stage time with Judi Dench, Glenn Close, Robert DeNiro and other greats.

“Sometimes I see her as Vanessa,” says Richardson, 54. “Being on stage with her, it was like, oh my God, this is where it happens. It’s in these moments, these magic moments, when she’s truly more present than I’ve ever seen her be, probably, in real life. It’s an extraordinary thing.”

Redgrave is similarly impressed with her daughter’s performance in “The Aspern Papers,” which is set in Venice in the late 19th Century. Richardson plays Miss Tina, a quietly unhappy middle-aged woman frightened of her elderly aunt whose life is disrupted by the arrival of an American editor seeking the old woman’s love letters from a fictional Romantic poet named Jeffrey Aspern.

“Suddenly, Joely becomes Miss Tina, right on the spot,” Redgrave says of her daughter. “Looking into her eyes, I don’t see Joely. I see Miss Tina. That’s special, that’s what she’s about in her work, finding that depth of truth.”
Redgrave is the matriarch of a venerable British acting dynasty that includes her late father Michael Redgrave; her late siblings Lynne and Corin Redgrave; and her children — Natasha Richardson, who died in a ski accident in 2009, Joely Richardson and writer and director Carlo Nero.

She recently worked with Nero on a documentary, “Sea Sorrow,” a very personal look at the migrant crisis motivated in part by her belief that the lessons of World War II have been forgotten.

Redgrave has long worked on refugee causes with United Nations agencies, and Richardson is also active with agencies advocating for refugees.

They filmed “The Aspern Papers” — with Jonathan Rhys Meyers in the male lead — in Venice during the stifling summer of 2017.

Richardson worried that her mother would have trouble coping with the heat, and the hundreds of steps leading to the dilapidated palace where most scenes were filmed, but Redgrave saw the time there as a blessing.