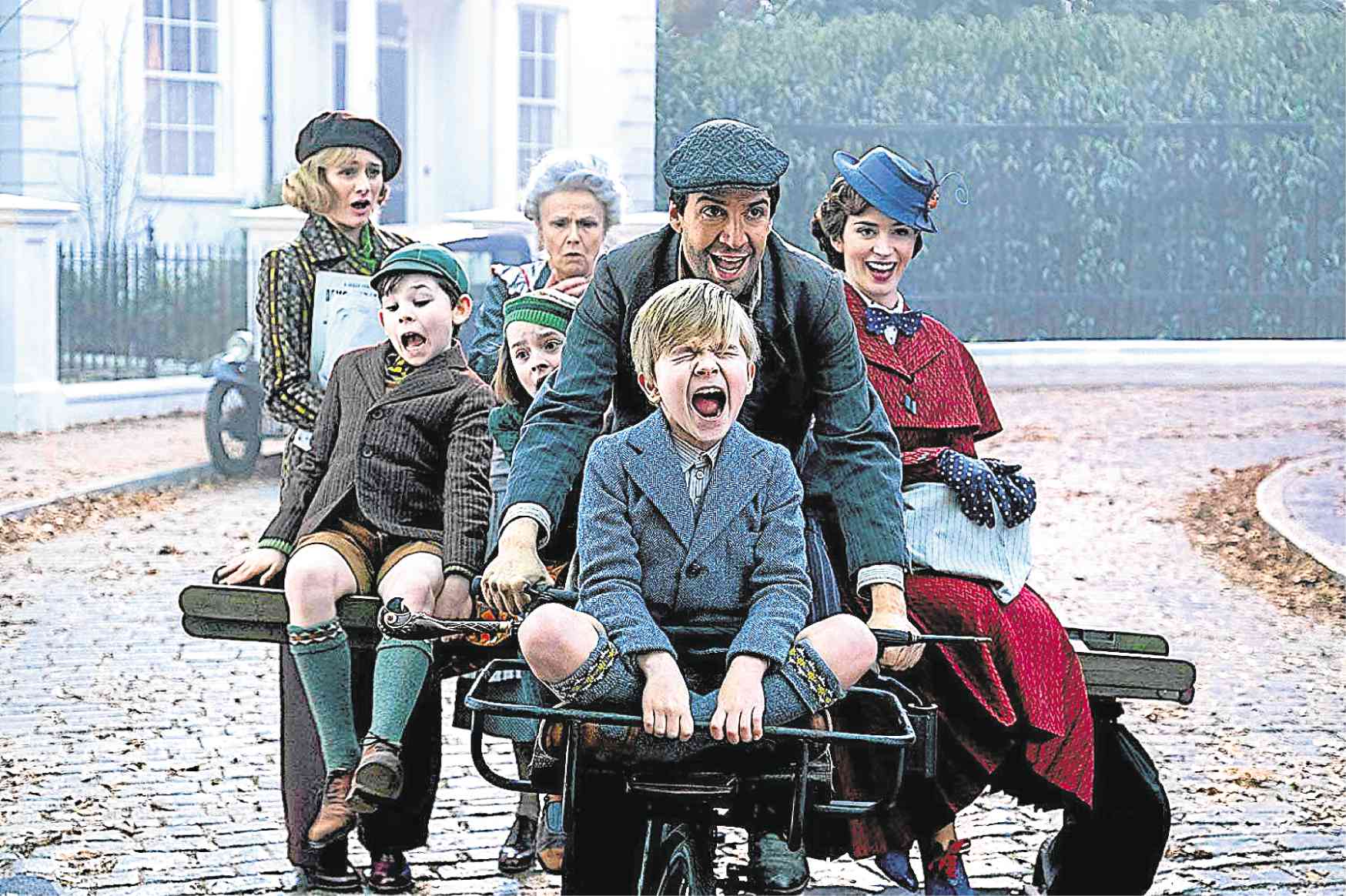 It makes you wonder what Travers meant when she tells the animator-turned-mogul in one scene that the titular character of her eight-book series “is the enemy of sentiment and whimsy,” explaining in part why she found the novel’s big-screen iteration not to her liking.

In fact, while she agreed to the casting of the sublime Julie Andrews as the umbrella-toting nanny, she disapproved of the actress’ depiction of Poppins, whose big-screen persona is beloved for her sugar-and-spice niceness.

In her writings, Travers allowed herself to get carried away by her vivid imagination—which made her contempt for people’s “intrusive friendliness” ironic.

In her books, the stern but magical nanny ends up taking her young wards to a trip around the world with a compass (1934’s “Mary Poppins”), attend an upside-down tea party and visit a circus in the sky (1935’s “Mary Poppins Comes Back”), show up in an undersea garden party (1943’s “Mary Poppins Opens the Door”), crash a Halloween dance soirée  with their own  shadows (1952’s “Mary Poppins in the Park”), and visit the Man in the Moon (1988’s “Mary Poppins and the House Next Door”). 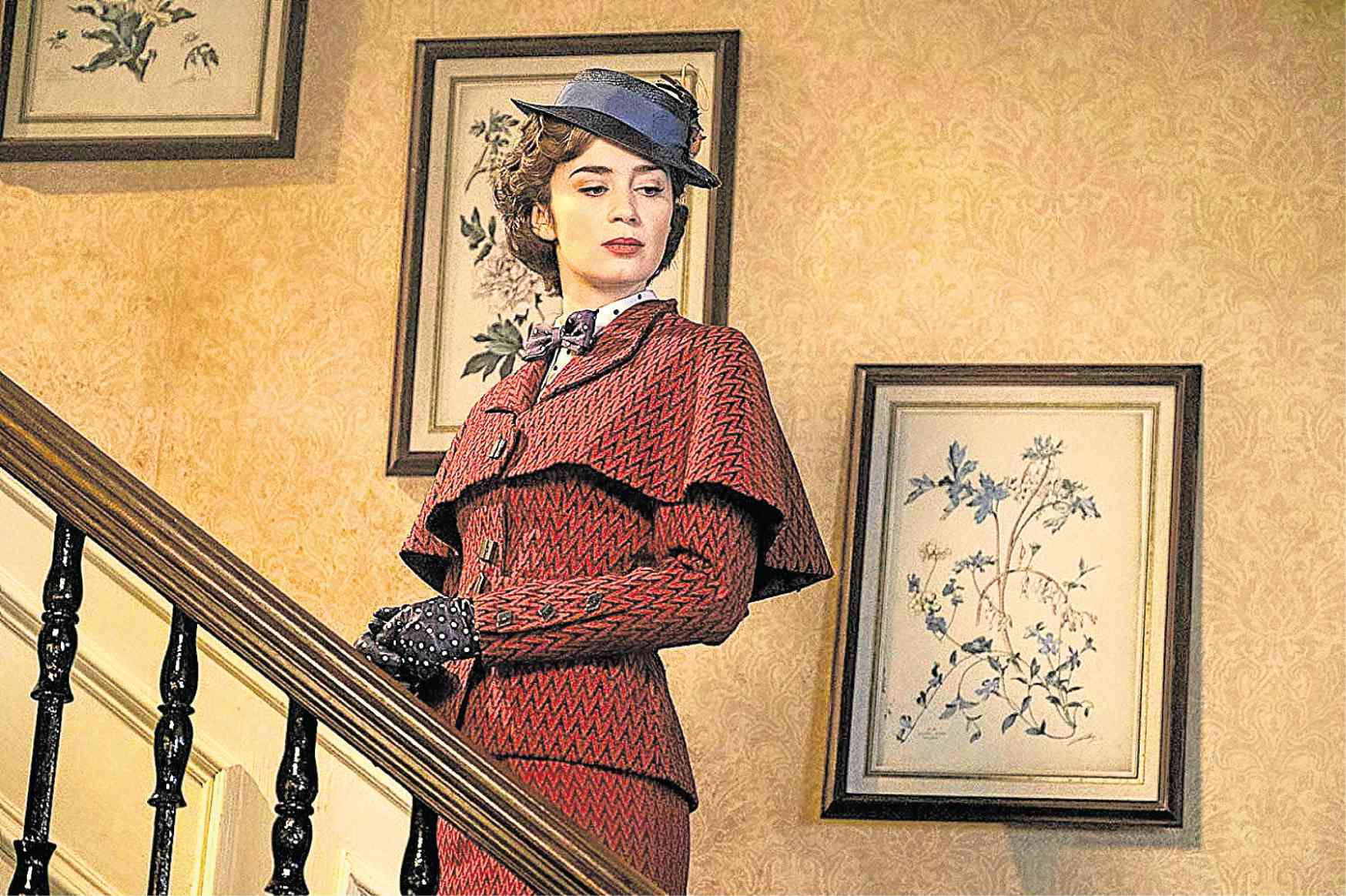 If those aren’t whimsical enough, we don’t know what is.

The luck-peddling nanny (Emily Blunt) once again descends from the clouds to give her problematic wards on Cherry Hill Lane a helping hand—this time, with the ubiquitous lamplighter Jack (Lin-Manuel Miranda), a former apprentice of Bert (Dick Van Dyke), by her side. 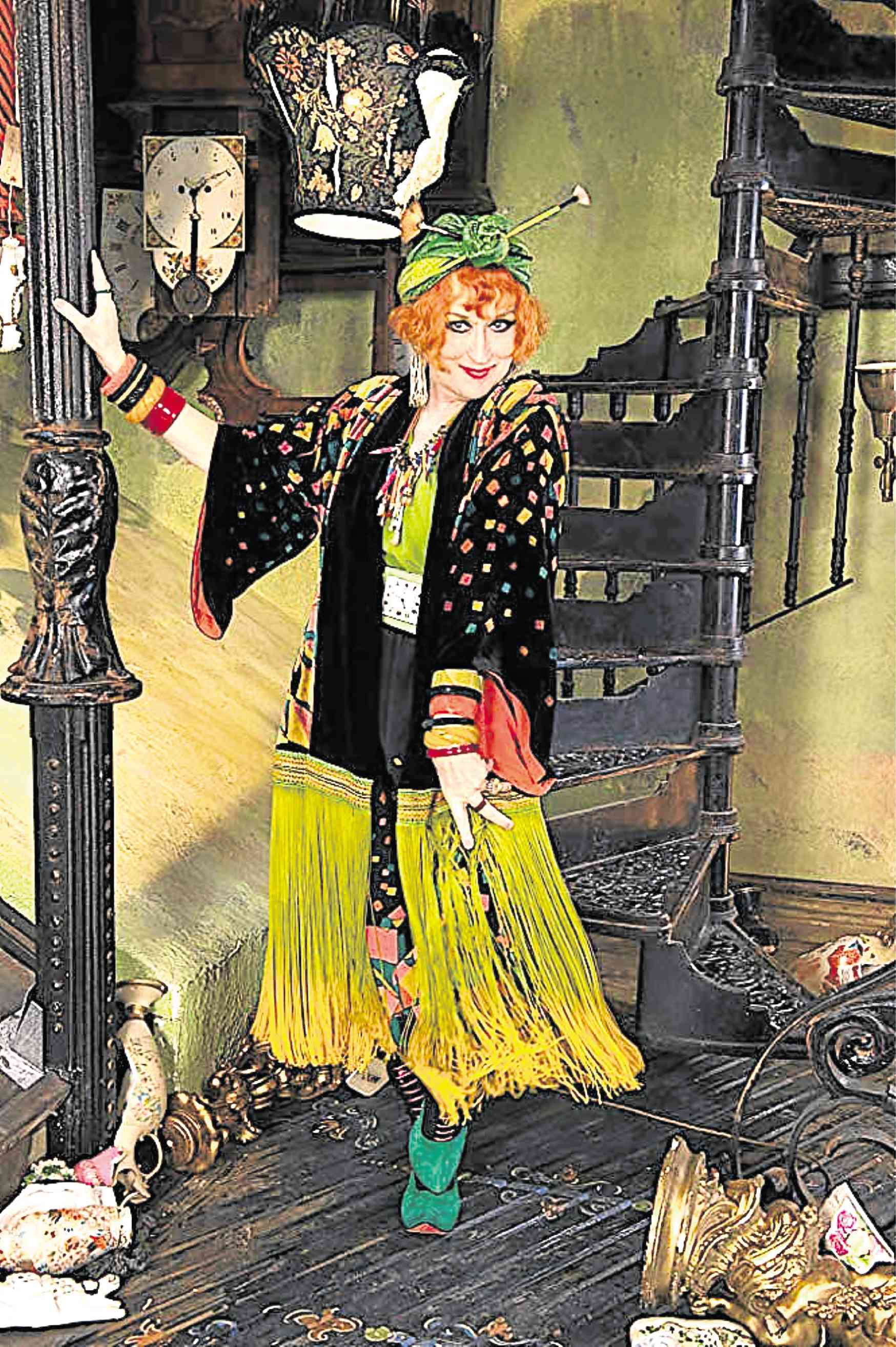 Part-time bank teller Michael Banks (Ben Whishaw) is now a widower with three children, Annabel (Pixie Davies), John (Nathanael Saleh) and Georgie (Joel Dawson). He receives a warning that his house will be repossessed if he doesn’t pay the full amount of the loan he’s taken from by the Fidelity Fiduciary Bank, which is run by the greedy William “Weatherall” Wilkins (Colin Firth)—in five days!

Michael’s sister Jane (Emily Mortimer), now a labor organizer, vaguely remem   bers that their father, George, had left them shares of stocks in the bank that could pay off their debt—but, the certificate to authenticate their claim is nowhere to be found!

We won’t bore you with the details about how the Banks and their nanny find themselves making the mad rush to save their ancestral home. 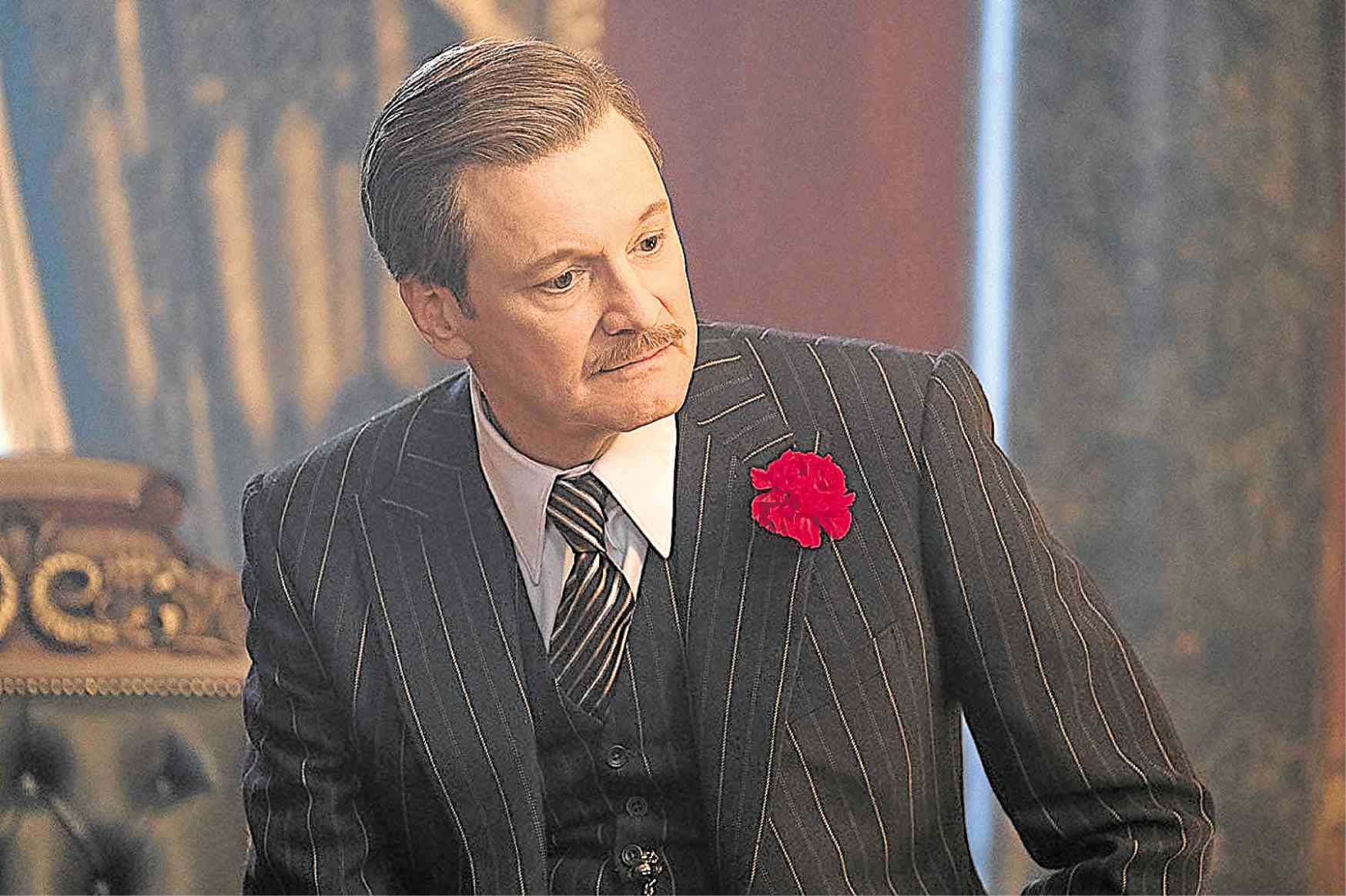 Suffice it to say that the production, a delectable hybrid of live-action and old-fashioned animation, manages to live up to viewers’ expectations about the musical’s uplifting and enriching viewability—which is anchored on Emily Blunt’s casting as Mary Poppins.

It would have been foolish for the 35-year-old actress to approximate Julie Andrews’ prodigious bell-like singing but, embracing her winking characterization with tongue firmly in cheek, the lovely Ms Emily manages to make the most of her appealing alto, which lends Earthbound relatability to her pitch-perfect portrayal.

Just as dazzlingly delightful are the movie’s choreographed numbers       (“Trip a Little Light Fantastic” is a veritable showstopper), as well as the animated scenes that are utilized as narrative means to an end. They don’t drive moviegoers’ attention too far away from the film’s no-frills allegory about seeing things from a different perspective. 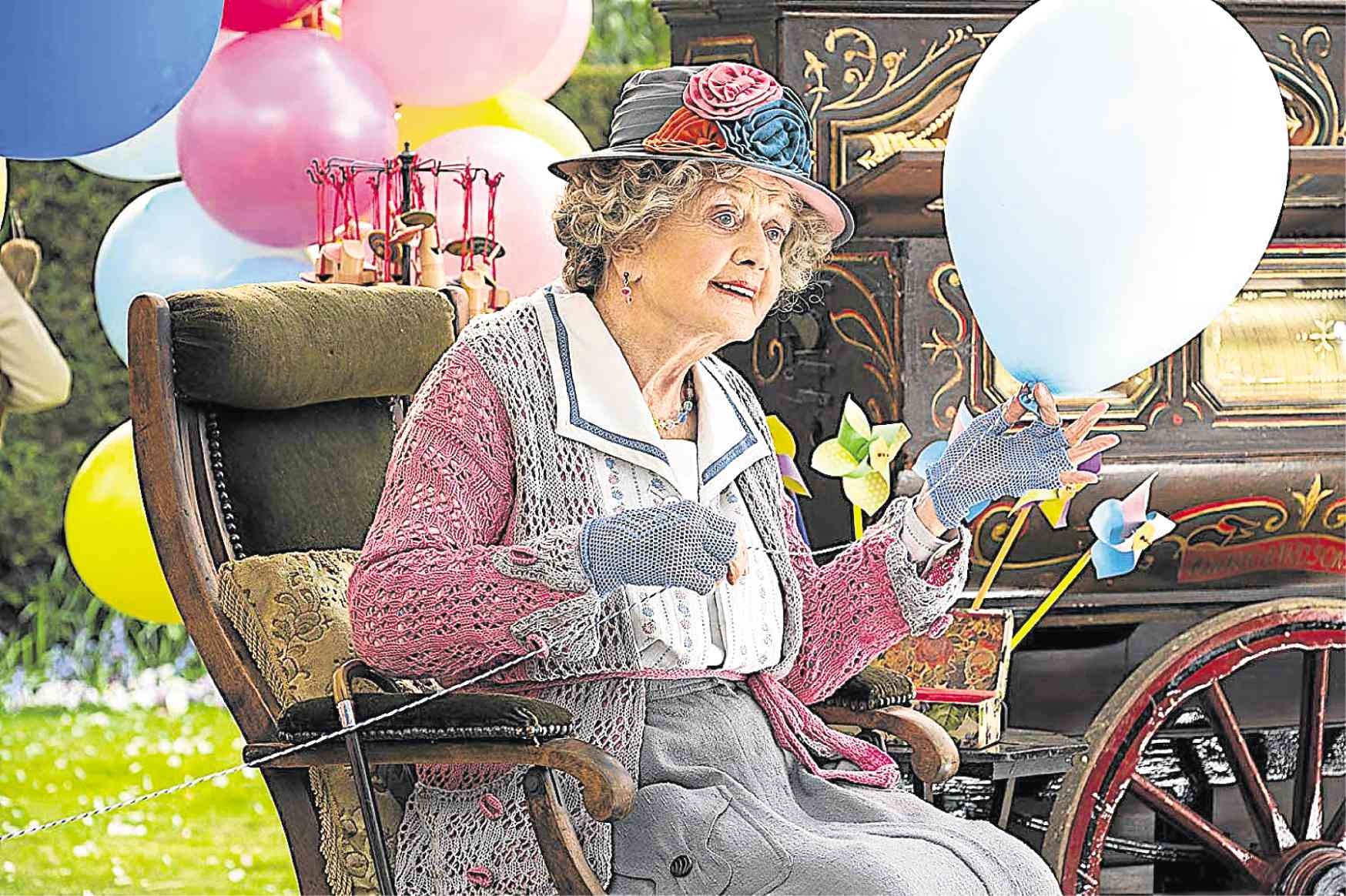 Angela Lansbury as the
Balloon Lady

Also stellarly staged are the cameo appearances of some of Tinseltown’s most well-loved thespians—from the twinkle-toed Dick Van Dyke and the chameleon-like Meryl Streep (as Topsy, who runs a fix-it shop)  to Angela Lansbury (as the Balloon Lady, who gets to sing the inspirational song, “Nowhere to Go But Up”).

In these hard and trying times, a little bit of feel-good schmaltz, garnished with a dash of music and magic, doesn’t hurt at all—which Travers’ characters continue to provide for many book-loving children of all ages around the world.

After all, for people who badly need some cheering up, a spoonful of sugar helps the medicine go down—and in the most delightful way, indeed!