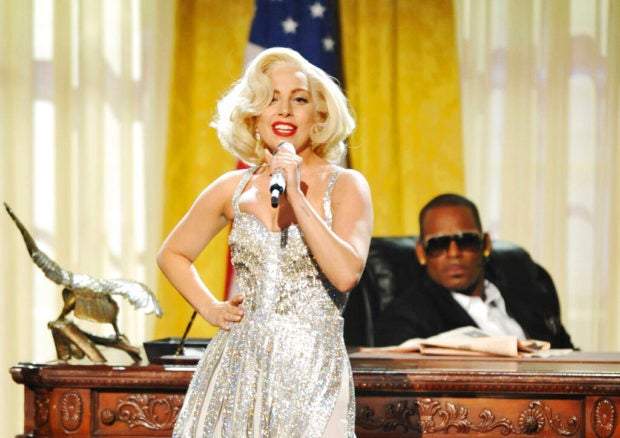 FILE – In this Nov. 24, 2013 file photo, Lady Gaga, center, and R. Kelly perform “Do What U Want (With My Body)” at the American Music Awards in Los Angeles. Lady Gaga is sorry for her 2013 duet with R. Kelly in the wake of sexual misconduct allegations against the singer, and she intends to remove the song from streaming services. (Photo by John Shearer/Invision/AP, file)

NEW YORK  — Lady Gaga is sorry for her 2013 duet with R. Kelly in the wake of sexual misconduct allegations against the singer, and she intends to remove the song from streaming services.

“What I am hearing about the allegations against R. Kelly is absolutely horrifying and indefensible,” she said.

Posting on social media on Wednesday, Gaga wrote that she had collaborated with Kelly on “Do What U Want (With My Body)” during a “dark time” in her life as a victim of sexual assault. She said she should have sought therapy or other help instead.

“I think it’s clear how explicitly twisted my thinking was at the time. If I could go back and have a talk with my younger self I’d tell her to go through the therapy I have since then so that I could understand the confused post-traumatic state that I was in,” she wrote. “I can’t go back, but I can go forward and continue to support women, men, and people of all sexual identities, and of all races, who are victims of sexual assault.”

Lifetime’s “Surviving R. Kelly” series, which aired this month, has brought renewed attention to the singer’s history and allegations that he has sexually abused women and girls. Kelly has denied wrongdoing and in 2008 was acquitted on child pornography charges.

Gaga’s collaboration with Kelly had been intensely criticized when it was released, in part because of the allegations against him and because of the sexually charged performances they did on “Saturday Night Live” and the American Music Awards in 2013. The video was directed by famed photographer Terry Richardson, who also had been accused of sexual misconduct; it was never officially released, but depicts Kelly as a doctor ogling a naked Gaga, the patient.

Richardson has denied allegations of misconduct and said any relationships he had with models were consensual.