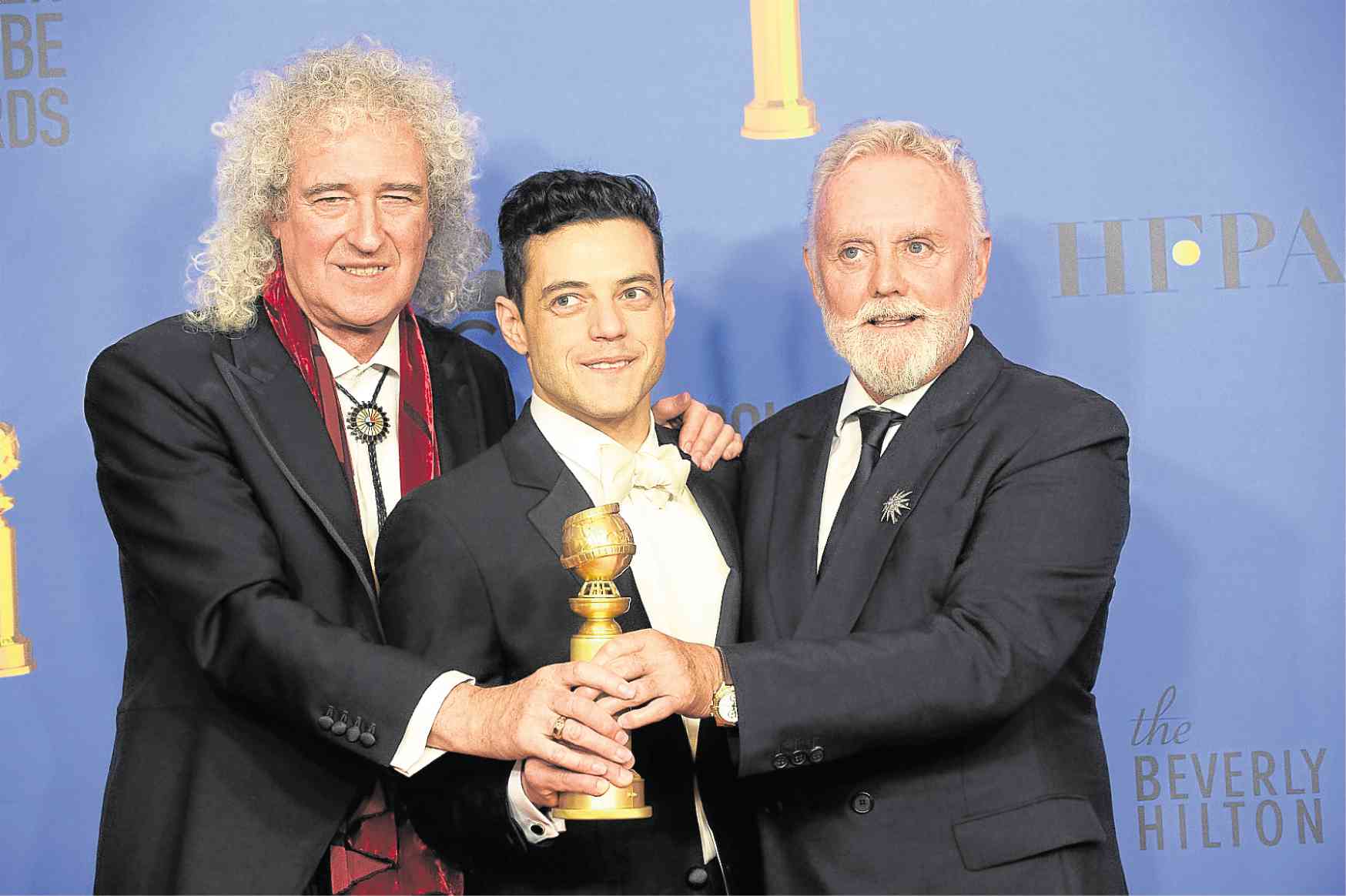 LOS ANGELES—On a rainy late afternoon—the day before the Golden Globe Awards where “Bohemian Rhapsody,” the Queen biopic, romped off with the best picture-drama honors—we interviewed the band’s legendary original members, Brian May and Roger Taylor.

Lead guitarist Brian, whose mountain of curls is now silver, tends to be the bemused of the duo and often added “Yeah” to Roger’s answers. Drummer and occasional vocalist Roger was more loquacious.

The following are excerpts from our chat with Brian (B) and Roger (R) at The Peninsula Beverly Hills: 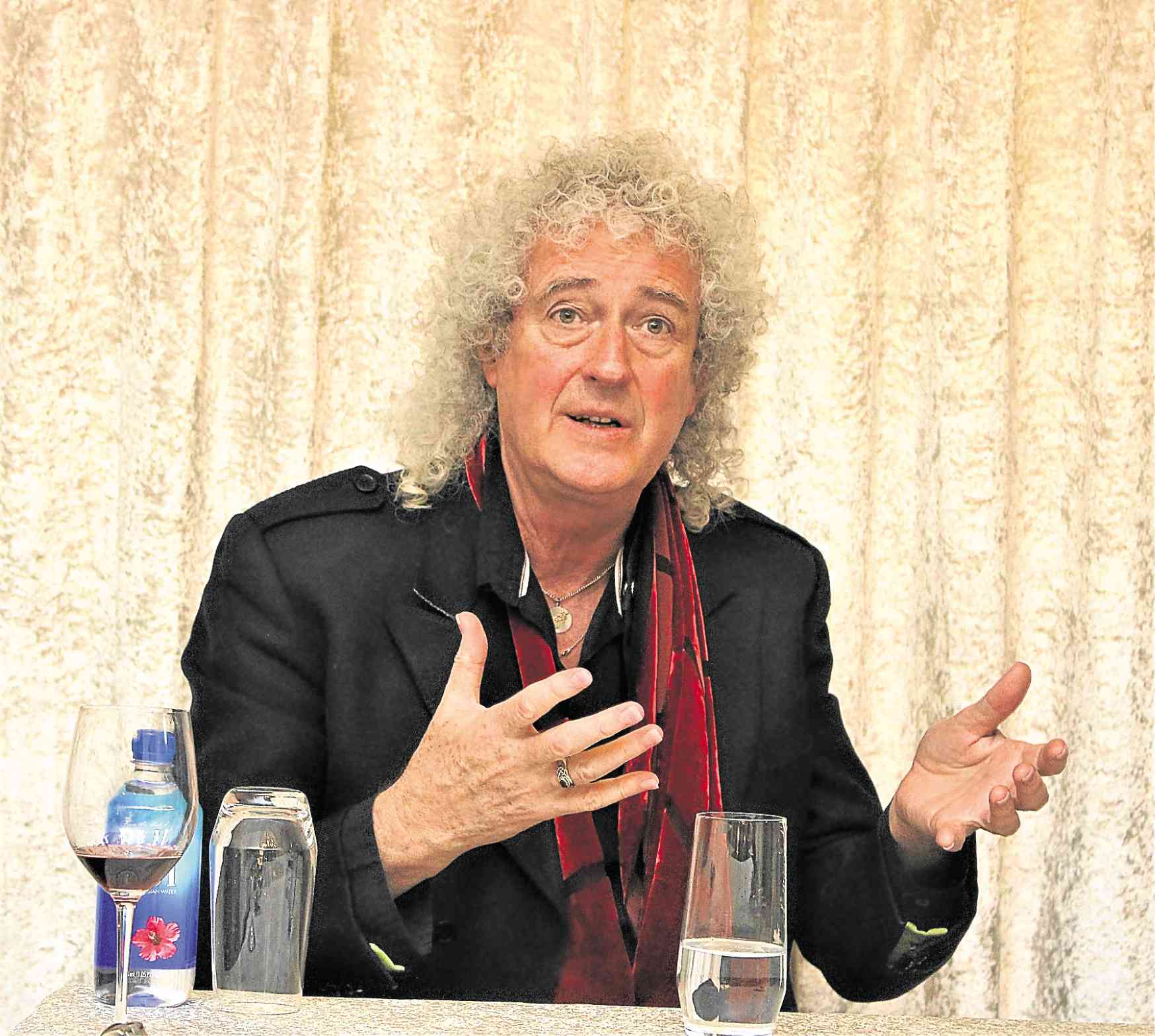 I understand the “Bohemian Rhapsody” DVD will include an extended and unseen scene from Queen’s performance in “Live Aid.” How did it feel to watch that again?

B:  Yeah, we mixed the whole thing. I have forgotten how amazing it was. But I got very emotional. So there’s quite a lot, and a few other edits, in there, including a big piece of “Radio Ga Ga.”

R:  And what you hear in the movie is the real performance, as it was untouched. We made the decision to make it a Freddie performance.

B:  Yeah, so you can hear the kind of stuff going on in Freddie’s throat, which is all real, which still engages me when I watch. Because the film brings out the fact that Freddie was having a little problem with his voice at the time, but you can hear it.

But you can hear the power and the passion. But also a special accolade, I would say, to Rami, who insisted that they film “Crazy Little Thing” because he had done all the work, and not only had he worked out how to sing it in sync with the Freddie track, but also how to play the guitar.

What is your reaction to some critics of the film who said that the true story of Queen is not told in the movie?

B:  I would like them to try and make a better film (laughs).

R:  It’s kind of analogous to our career in music. We had a lot of criticism.

We are very proud of this film, because a lot of people were touched by it, moved, then hopefully uplifted.

So we feel it’s an honest portrayal. It’s not a documentary. And this has become the biggest biopic of all time, which is incredible.

The reason is that it actually does address the inner self of the man it portrays. It portrays his dreams, passion, strength and his vulnerabilities, in a very honest way, which connects with people.

B: The movie has done a lot to … bring things in the open and make families to be able to look at their problems in a similar way to what we did.

R:  Freddie had a very shy side. Privately, he was very shy. Publicly, he was the opposite.

B:  A lot of things.  Some of it are in the film. They didn’t expect to see the small guy who was tentative in many ways.  I’ll tell you something not a lot of people know—he was a very keen stamp collector (laughs). In his youth.

How did you feel about seeing yourselves portrayed onscreen? Was it a shock, or was it accurate?

R:  They got my clothes wrong (laughs). I wouldn’t be seen dead in some of those.  But no, so much of the detail was incredible in the film.  The actors who played us—it was quite uncanny, actually.  Brian’s son was convinced that Brian had dubbed his voice.

B:  That’s right, Gwilym Lee (who played Brian) got so close.

When we met Rami, and when we talked to him, you could see him transforming himself and believing that Freddie was inside him and he was inside Freddie. So it’s an astonishing job that he did.

There’s a moment in the movie when Freddie tells you that he has HIV. When did he actually tell you and what was your reaction?

B:  He told us actually at a different time. But we suspected (that Freddie had HIV) for a long time, and we didn’t dare to talk about it.

B: It was a long time before he told us.

R:  So little was known about the condition. We knew that there was something wrong, and he actually told us in his bedroom.

B:  And the fact is that he did it very much the way that you see in the film.

R:  He just wanted to work.

B:  Carry on as normal—we work, make music, because that’s what we do.

After that, how long was it before he died?

We did a lot of work in that time.  It was very important for him to feel that we were together.

B:  In fact, a lot of people would say that we did our best work during that period, when we came together as a family and were very protective of Freddie.

I read that for the longest time, you did not even know he was gay.

B: That’s right. I used to share a room with Freddie on tour, because (at first) we didn’t have the money to have separate rooms. So I know who was in Freddie’s bedroom during those times. And some of them were very pretty girls.

R:  Androgynous and very flamboyant. But Freddie really was, as in the movie, conflicted.

Was there ever a time when you wished you could do other things?

R: One of the lower points is covered in the movie. When Freddie died, Brian and I thought, well that’s that, it’s been great, it’s all over, and we were absolutely devastated.  And we didn’t do anything for several years. Then, we eventually made an album with the bits that we had left.

And the whole thing cranked up again. We found Paul Rodgers, then we found the wonderful Adam Lambert.

It must feel different now?

B:  It feels different and yet, it feels the same in some ways, which is quite odd. Roger and I were ready to leave it after we lost Freddie.

But then, you realize that there are people out there who want to hear Queen and want to see it live. And you find someone like Adam Lambert. I call him “the gift from God.”

B: So we can tour at the top level. The tour we are about to do in the summer would be the biggest production we ever put on the road.

Will you explain someday the meaning of “Bohemian Rhapsody”?

B:  We are never going to explain the song. That’s not on the cards. The movie sort of explains it as much as anyone would ever want to.

B:  And also, the whole canon of our albums has a lot of songs that didn’t get that much attention, but nevertheless are very representative of the processes that are going on in our creative minds.

Was ego a problem with the band?

B:  Of course, lots of ego.  Yeah.  And that is part of the stuff that makes a band powerful in a sense.

R: We always fought, but we would come to some kind of agreement. Yeah, it was a good chemistry.