Barely a month after an Ateneo Junior High School bullying incident went viral on social media, the student and his mother issued a public apology. 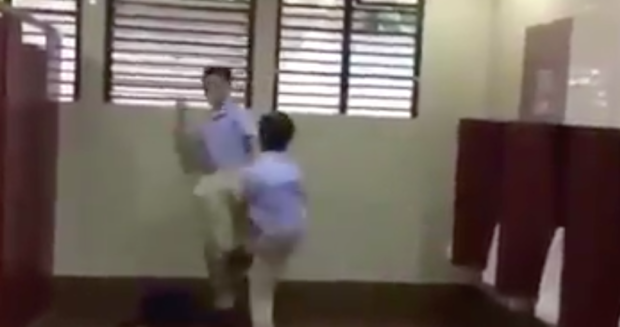 Still from a video of an Ateneo high school student bullying a classmate. Image: Screengrab from Facebook, INQUIRER.net file photo

(I would like to apologize for the action of my son. To those whom he hurt, to [Ateneo] if they have been dragged in this issue, I apologize. But I also want to ask for people’s understanding because my son is still a child.)

Meanwhile, the student, who is now undergoing counseling, asserted he was only defending himself from the other student who challenged him to a fight before the video was taken: “I was just defending myself, hindi naman ako nambu-bully (I don’t bully) for no reason eh.”

(Sad, devastated are not enough words to describe how we felt. Because our dreams as parents for our son was what they denied.)

However, some celebrities expressed their disappointment with what they perceived as a lack of sincerity in the mother and son’s apology. 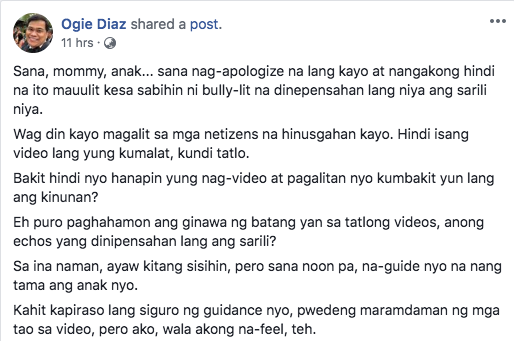 (I wish you [mother and child] just apologized and promised that the incident will not be repeated instead of the student saying he only defended himself.)

He stated that the mother and son should not be mad at netizens for judging them — after all, not only one, but three videos of separate bullying incidents made the rounds on social media.

(To the mother, I don’t want to blame you, but you should have guided your son. I was not able to feel even a bit of your guidance during the interview.)

Celebrities took to the comments section of Diaz’s post to share their sentiments on the matter. Actress Ynez Veneracion said she felt a lack of sincerity on the part of the mother’s apology. 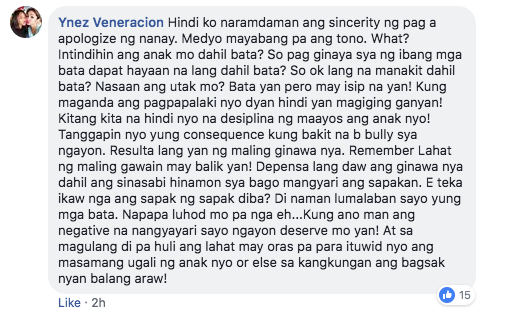 (I did not feel the sincerity of the mother’s apology. Her tone is also arrogant.)

(If your son’s upbringing was good, he would not be like that! It is evident that you did not discipline your child!)

“‘Pinoy Big Brother” alum Fourth Pagotan likewise disapproved of the attitude shown by the mother of the student. “Yung ina kunsintidor ang dating… halatang may attitude din (The mother comes off as an enabler… it’s obvious she has an attitude as well).”

Writer and director Joey Javier Reyes summarized his opinion on the apology in one sentence.

“The failure to see the mistake says it all.” NVG