After a tame Globes, is a less-charged awards season ahead? 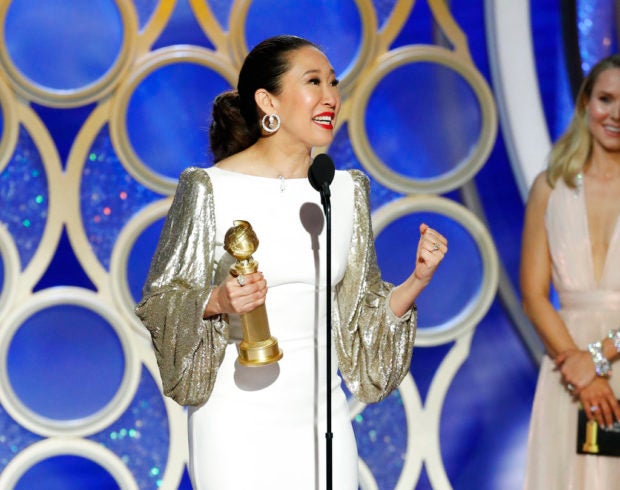 This image released by NBC shows Sandra Oh accepting the award for best actress in a drama series for her role in “Killing Eve” during the 76th Annual Golden Globe Awards at the Beverly Hilton Hotel on Sunday, Jan. 6, 2019 in Beverly Hills, Calif. Image: Paul Drinkwater/NBC via AP

BEVERLY HILLS, California — The Golden Globe Awards looked like it had gone entirely back to frothy, bubbly business as usual, until Regina King did the impossible: She got the orchestra to stop playing her off. Not even Lady Gaga had that much power.

King used her platform on stage accepting the supporting actress award for “If Beale Street Could Talk,” to shed a light on Time’s Up x 2, the second year iteration of the legal defense fund founded in the wake of the sexual misconduct revelations that shook Hollywood.

“We understand that our microphones are big and we’re speaking for everyone,” she said before pledging that every project she produces for the next two years will have at least 50 percent of women working on it. “And I challenge anyone out there who is in in a position of power, not just in our industry, in all industries, I challenge you to … stand with us in solidarity and do the same.”

It would be one of the rare show-stopping moments of the night. After last year’s Golden Globes were host to such a powerful display of female solidarity, in which top actresses walked the carpet in all-black alongside prominent activists in support of Time’s Up and #MeToo, this year, statements were no longer collective. They were individual.

A few actresses, Gina Rodriguez and Rachel Brosnahan among them, wore Time’s Up x 2 ribbons on the carpet; Patricia Clarkson said that her “Sharp Objects” director Jean-Marc Vallee “demanded everything of me except sex which is exactly how it should be in our industry”; Glenn Close implored women to “find personal fulfillment” and follow their dreams; Co-host Sandra Oh got emotional saying she said yes to hosting so that she could, “Look out on this audience and witness this moment of change”; And Emma Stone even shouted out an apology from the audience for playing a part-Asian character in “Aloha.”

Sunday’s Globes could be a sign that awards shows, in general, are going to return to business as usual: The occasional snide political remark (Christian Bale thanking Satan for inspiration playing Dick Cheney, or positing that Mitch McConnell might be a good “uncharismatic” role to play next, adding an expletive), or showbiz joke (Oh and Andy Samberg saying in unison that “one lucky audience member will host the Oscars!”).

Harrison Ford presented the directing award and did not, as Natalie Portman did last year, note that all the nominees were men (again).

Patricia Arquette, who three years ago called for equal pay while accepting her supporting actress Oscar, kept her speech to standard HFPA, fellow nominee and producer thanks (albeit with two F-bombs). And following two years of show-stealing Cecil B. DeMille award speeches from Meryl Streep and Oprah Winfrey, Jeff Bridges brought the honor back to earth with a heartfelt, nostalgic and, interestingly wide-ranging vamp about everything from Peter Bogdanovich and the Coen brothers to geodesic domes.

Even Carol Burnett, as the first-ever recipient of an award named after her, stayed in the past as well, speaking about how her show would never get made today.

As for the winners, while the choices of the 88-member Hollywood Foreign Press Association has no direct relation to the nearly 8,000 members of the Academy of Motion Picture Arts and Sciences, a win on a stage of the Golden Globes doesn’t go unnoticed, and Oscar nomination voting began Monday. Some probably didn’t need a bounce, like Olivia Colman’s win for “The Favourite,” or “Shallow” winning best original song. Some did, like Glenn Close who upset Lady Gaga with her best actress drama win for “The Wife” and gave one of the best speeches of the night.

“Bohemian Rhapsody” was not well-received by critics, who pointed out its factual inaccuracies and music biopic trappings, but resonated with audiences (it’s made over $743 million worldwide to date), and its awards profile is growing. “Green Book,” meanwhile, went from winning the audience award at the Toronto International Film Festival to being scrutinized for its racial politics.

“Green Book” director Peter Farrelly also got the orchestra to back off, but, in his case it was so that he could talk about his film.

“This story gave me hope and I wanted to share that hope with you,” Farrelly said on stage. “If Don Shirley and Tony Vallelonga can find a common ground so can we.”

Both pleased enough crowds and HFPA voters, despite the backlash, to win out over “A Star Is Born,” a film that everyone, wrongly, presumed would dominate Sunday night.

But everyone loves an underdog, and now, it’s “A Star Is Born’s” turn to find its way back to the top. MKH