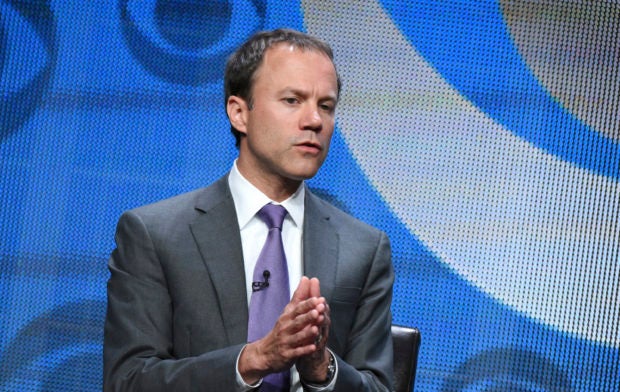 FILE – In this Aug. 10, 2015, file photo, David Rhodes, president of CBS news division, participates in the CBS News panel at the CBS Summer TCA Tour at the Beverly Hilton Hotel in Beverly Hills, Calif. CBS says Rhodes is stepping down following a troubled year that saw morning anchor Charlie Rose and the top executive at “60 Minutes” lose their jobs following misconduct reports and ratings issues at its top shows. In a memo to his staff, Rhodes said Sunday, Jan. 6, 2019, that “the new year is a time for renewal, for new goals. The world we cover is changing, how we cover it is changing – and it’s the right time for me to make a change too.” (Photo by Richard Shotwell/Invision/AP, File)

Zirinsky, who started work at CBS in the Washington bureau as a 20-year-old in the early 1970s and is currently the executive producer at “48 Hours”, will take over in March.

“It’s a very humbling and daunting role,” said Zirinsky, 66, in an interview Sunday. “When you’ve been working someplace for 40 years, it’s a moment.”

In a memo to his staff, Rhodes said Sunday that “the new year is a time for renewal, for new goals. The world we cover is changing, how we cover it is changing — and it’s the right time for me to make a change too.”

Rhodes came to CBS News from Fox News Channel and, together with former CBS News Chairman Jeff Fager, saw success in emphasizing a newsier approach than its rivals. The launch of “CBS This Morning” with Rose, Gayle King and Norah O’Donnell was a particular success.

But in November 2017, Rose was abruptly fired following reports of improper behavior involving female staffers at CBS News. The show’s ratings have taken a tumble since then, and that show’s executive producer recently exited.

Rhodes last fall also had to oust his former partner, Fager, who had returned to his original job as executive producer of “60 Minutes”. Fager had sent a message regarded as threatening to a CBS reporter who was working on a story about alleged bad behavior at the show and by Fager.

“It was a cultural shift in the country and CBS had a piece of it, no doubt about it,” Zirinsky said. “But we’ve taken it head-on.”

Ianniello owes his job to a more sordid sexual misconduct involving former CBS Corp. chief executive Leslie Moonves, who was ousted last fall. The CBS board is currently trying to halt a multi-million dollar payment Moonves was to receive upon leaving.

Besides finding a new leader at “CBS This Morning”, Zirinsky will be charged with appointing a new executive producer at “60 Minutes”, television’s most popular and influential news program. Bill Owens has been the interim leader and he was considered a top candidate for the job, along with Zirinsky.

Rhodes’ decision to appoint Jeff Glor as anchor of the “CBS Evening News” has not succeeded in the ratings.

Zirinsky said ratings issues are hardly unique to CBS News and that she’s looking forward to the challenge of delivering news in a digital-heavy age heading into a new presidential election cycle.

“I really believe that the power is within us and there’s work to be done,” said Zirinsky, who plans to address the CBS News staff on Monday.

As a news producer, Zirinsky has had a hand in dozens of major stories over the past four decades, perhaps most memorably in a documentary account of the Sept. 11 terrorist attacks as seen from the point of view of French filmmakers who were nearby making a documentary about firefighters that day.

She’s also known — as a character — to a generation of moviegoers. She was the model for the hard-charging news producer portrayed by Holly Hunter in the 1987 movie, “Broadcast News”.

“No broadcast news producer is more highly respected and admired than Susan Zirinsky,” Ianniello said. “She is an exceptional leader, a creative force, and an outstanding and proven journalist.” CC

A CBS network shaped by Moonves is challenged without him