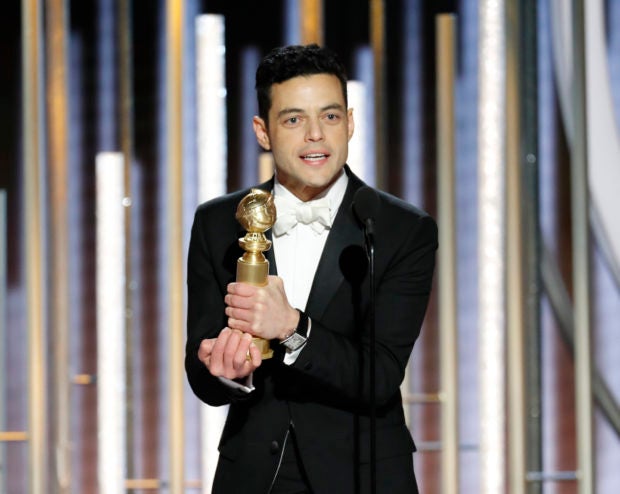 This image released by NBC shows Rami Malek accepting the award for best actor in a motion picture drama for his role as Freddie Mercury in a scene from “Bohemian Rhapsody” during the 76th Annual Golden Globe Awards at the Beverly Hilton Hotel on Sunday, Jan. 6, 2019, in Beverly Hills, Calif. Image: NBC/Paul Drinkwater via AP

BEVERLY HILLS, Calif. (AP) — Rami Malek said his “heart was pounding out” of his chest after winning a Golden Globe for best film drama actor Sunday night for his portrayal of Queen frontman Freddie Mercury in “Bohemian Rhapsody”.

Malek gave a surprised expression after his name was called for the award most thought would go to Bradley Cooper, who starred in “A Star is Born”. It’s Malek’s first Golden Globe win after being nominated twice for his role on the television drama “Mr. Robot”.

“I am beyond moved,” he said before thanking Queen members Brian May and Roger Taylor, as well as Mercury for providing the role of a lifetime. He thought highly of Mercury saying he was a “deity” and a “god.”

“I tried to find the humanity in him,” he said. “I related it to him being an immigrant struggling to discover his identity. I tried to take everything he was struggling with, his complication, his chaos, his turmoil and this beauty inside of him. He lifted me up to be everything I could be in this film.”

Bale thanked his wife early in his acceptance speech then Satan for providing inspiration on how to play Cheney before suggesting he might take on another unlikable character, Senate Majority Leader Mitch McConnell. The film delves into the Cheney family’s backstory and how he became one of the most powerful and influential people in the country.

Bale’s weight normally fluctuates to play different characters such as his Trevor Reznik role in “The Machinst”, a film where he knocked off 120 pounds. He also bulked up to play Batman in Christopher Nolan’s “Dark Knight” trilogy.

For “Vice”, Bale gained around 40 pounds and had a full makeover wearing prosthetics to mirror Cheney’s head, nose and chin dimple.

“Everyone who worked on my prosthetics did an amazing job,” Bale said. “If they hadn’t done their job, I wouldn’t be here.” CC