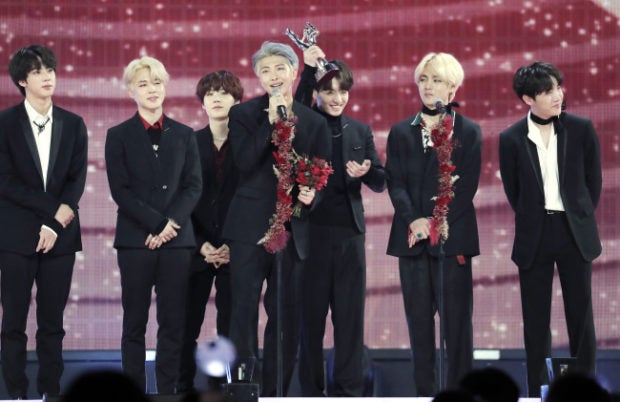 SEOUL — Having grabbed bagful of gongs at the MMAs and Asia Artist Awards, BTS once again won big at the 33rd Golden Disc Awards in Seoul on Sunday.

As soon as BTS was called out to receive the Daesang, or the grand prize, members stood up bowing their heads repeatedly toward all the singers and their fans to show their gratitude.

“We turn the honor of the awards to our official fanclub Army for supporting us throughout 2018,” said leader RM.

“We had a hard time at the start of the year, getting a lot of pressure about the huge title we got over the last few years. But now we think that if we work hard and always stay humble, the pressure will soon disappear. Once again, thank you Army,” he added

BTS performed two songs, “Fake Love” and “Idol,” on the second day of the Golden Disc Awards. Once again, the group put on the stage perfectly synchronized choreography while showing off its excellent live singing.