Queen of All Media Kris Aquino opted to ignore what actress Gretchen Barretto thinks of her, urging her fans to do the same.

After Nicko Falcis,, Aquino’s former project manager, released a statement on the qualified theft and violation of the Access Devices Regulation Act charges filed by Aquino, Barretto took to Instagram yesterday to express her support for Falcis.

Her action did not sit well with Aquino’s fans who used the comments section of Aquino’s posts in the same platform yesterday to convey their anger. They pointed out that Barretto had plastic surgery and that she is both a mistress and a “trying hard socialite.”

Barretto has been upfront about her relationship partner Antonio “Tonyboy” Cojuangco who has yet to annul his marriage with equestrienne Denise Yabut Cojuangco. In July last year, Barretto told a basher, “I’m the kabit who’ll live happily ever after.”

(Gretchen is sassy but she’s a coward because she turned off the comment button in her Insta. What silliness is this Greta? Let’s not pretend anymore, you’re already caught. Stop interfering, please.) 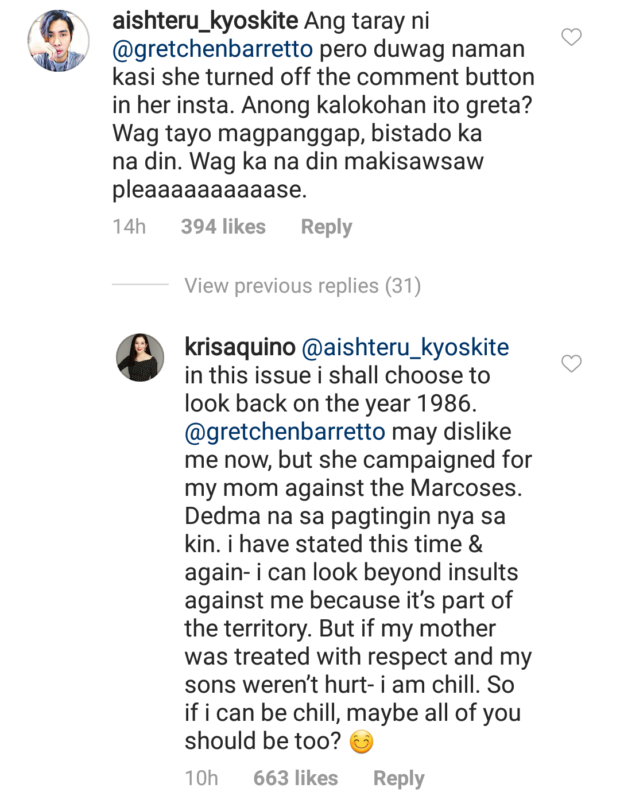 “In this issue I shall choose to look back on the year 1986,” Aquino replied. “Gretchen may dislike me now, but she campaigned for my mom against the Marcoses.”

As Aquino said she chooses to ignore what Barretto thinks of her, she also called her fans to do the same.

“Dedma na sa pagtingin nya sa kin (I’ll ignore what she thinks of me),” Aquino replied. “I have stated this time and again — I can look beyond the insults against me because it’s part of the territory. But if my mother was treated with respect and my sons weren’t hurt — I am chill. So if i can be chill, maybe all of you should be too?” JB

Why Kris Aquino has no worries about death