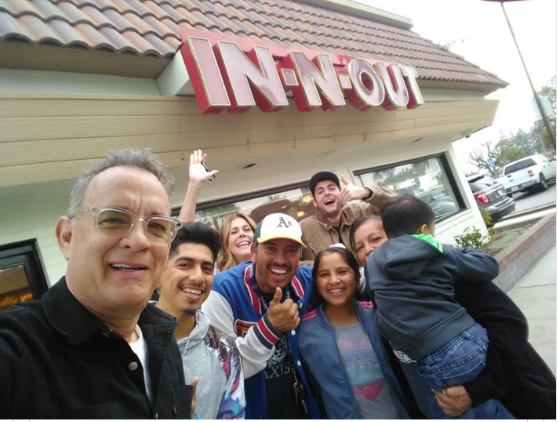 Patrons of popular burger joint In-N-Out were surprised and grateful when Tom Hanks recently dropped by to buy them lunch. The heartwarming sight was shared across social media by patrons who managed to get a snap and a clip of the famous actor, who was jovial and unassuming during his day out with wife Rita Wilson.

A certain Megan, a teacher in Fontana, first took to Instagram last Dec. 22 where she shared a picture of Hanks dining in the burger joint. In her post, Hanks can be seen sitting at a table beside Wilson and another companion, as they conversed and ate burgers.

“Tom Hanks is at In and Out sitting across from us I’m star struck!!” gushed Megan (@bookcauldron13).

Later on, the netizen shared another post, this time showing pictures of Hanks taking selfies with fans inside the restaurant. In another photo, he can be seen speaking to an In-N-Out worker with his back to the camera.

Meanwhile, a certain Renee Chavez took to Facebook last Friday, Dec. 21, to share a short clip of Hanks by the drive-thru cashier of the burger joint, where the star paid for the orders of the cars in line.

“@tomhanks thanks for lunch…” wrote Chavez, who was taking the video from her car. “He’s in Fontana people.”

In the video, Hanks can be heard telling the cashier, “That’s for the next three cars,” as he handed over some money. Chavez shouted a thanks and “Have a good Christmas!” as the actor walked back to his car.

@tomhanks thanks for lunch …. he’s in Fontana people

“Look who visited Fontana In N Out!” they wrote. “Woody himself, Tom Hanks, and he bought lunch for everyone! Nice!”

Look who visited Fontana In N Out! Woody himself, Tom Hanks, and he bought lunch for everyone! Nice! pic.twitter.com/LcNGr9S7X0

Megan also shared that Hanks regaled fans and signed In-N-Out hats and pictures during their time at the burger joint, as per E! News on Dec. 23.

“He was genuinely nice, laughing, talking with everyone and taking selfies!” Megan said in the report. “He wished us a Merry Christmas on his way out.”

Life sure is a box of chocolates; you never know what you’re gonna get. But for these lucky fans and patrons, it’s free lunch and an unforgettable moment with Hanks himself. Cody Cepeda/JB

Read Next
LOOK: Arci Muñoz brings her equally fashionable mom to Japan
EDITORS' PICK
Duterte vouches for Galvez: Why focus on alleged corruption in vaccine pricing?
New Year, New Rediscoveries
Experience clearer calls nationwide with Smart VoLTE
Vaccine nationalism puts world on brink of ‘catastrophic moral failure’ – WHO chief
Driving can be even more rewarding this New Year — here’s why
Norway advises caution in use of Pfizer vaccine for the most frail
MOST READ
Duterte to firms: No franchise until you settle your accounts with gov’t
7 copassengers of UK variant patient can’t be traced
3 things Leni can learn from Biden’s victory
#DefendUP trends after DND scraps agreement with UP
Don't miss out on the latest news and information.