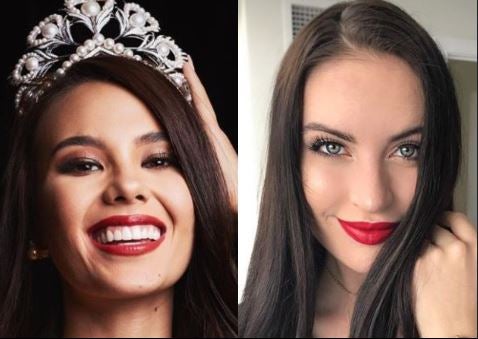 Apart from all the politicians, celebrities and netizens who fervently congratulated Gray for her win, Miss Universe Canada 2016 Siera Bearchell also rallied behind her. Bearchell, who is 8 months pregnant, has been taking to YouTube where she would regularly share her predictions and reviews about the Miss Universe candidates. In her latest video shared on Dec. 17, Bearchell gave a recap and her thoughts over the result of the pageant.

Her support for Gray could not get any more palpable, as she showed to the camera the shirt she was wearing, which had the words, “Miss Universe 2017 The Philippines” written all over the front.

“My prediction was right on who was to beat because nobody beat her…” Bearchell said. “I have supported this girl from when she was at Miss World and I thought she should have won Miss World, but obviously she was on to bigger and better things.”

She shared how she stood up for Gray during the Binibining Pilipinas 2018 pageant where the latter was body-shamed. “I know what it’s like to go through that and she’s just so amazing and beautiful and didn’t deserve all that criticism.”

Bearchell experienced body shaming during her time at Miss Universe 2017, where she was told by critics that she was larger than the rest of the girls. She, however, proved all her haters wrong with her top 9 finish.

“I have supported this girl for a long time and she has deserved every moment of this victory and it is very exciting.”

Bearchell also gushed about Gray’s Mak Tumang gown, which she said looked like it was on fire.

“Philippines, oh my god, when I saw that gown, I didn’t even know what to say, I said to my husband ‘that gown looks like it’s on fire.’ Her gown was amazing, the slit,  it was unbelievable…”

She also commended Gray for her answer during the Top 3 Q and A, saying she nailed it by touching on a personal note. She shared it was really important that Gray’s advocacy was something she has already explored and would continue to explore more in the future.

“I don’t like it when girls just get up there and say here’s all the things I would do or I’m gonna do,” Bearchell said. “Here’s the things that I’ve done and here’s how I can do even more. That’s what I like and that to is me what Philippines 100 percent nailed.”

In the end, Bearchell said that Gray is a well-deserved winner and hoped that Miss Universe will be held in the Philippines next year she can go with her baby, which she may or may not name after Gray.

“I will for sure be there if I can I’ll bring my small human with me. A lot of you have been saying I should name her Catriona which I don’t think that’s quite gonna happen, but maybe I’ll convince my husband for it to be the middle name, at least.”

Bearchell’s review of Miss Universe 2018 may be viewed below.  /ra