The latest DC movie offering “Aquaman” made a splash in Manila as Jason Momoa and Amber Heard paid a visit to the Philippines last Dec. 11. 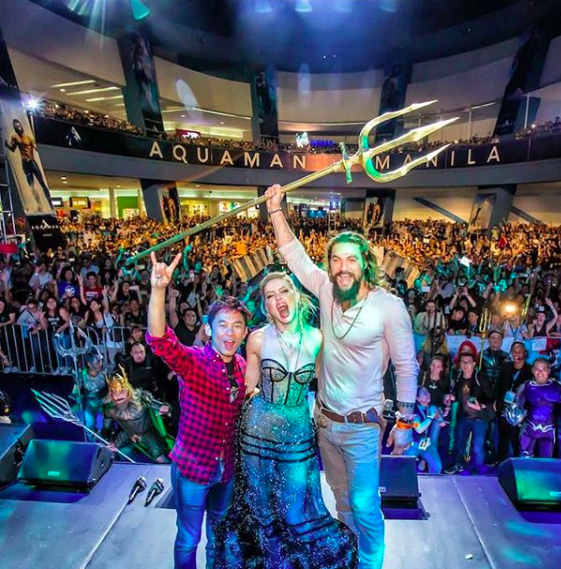 The stars, who play Aquaman and Atlantis’ Queen Mera, respectively, attended a fan event at the SM Mall of Asia in Pasay City.

Momoa shared highlights from the trip in a four-minute video on his own YouTube channel. It begins with him at an airport, narrating that he had come from a “Saturday Night Live” party and caught a 16-hour flight to Hong Kong before making his way to Manila.

Upon touchdown at the Ninoy Aquino International Airport, Momoa, Heard and their entourage are seen enjoying a ride on a cart across the airport and receiving a warm welcome from staff.

He also featured YouTube personality Bogart the Explorer who had the chance to interview him.

When he arrived at MOA, a massive crowd at the Music Hall welcomed him with loud cheers. A blue carpet was rolled out for him, Heard and director James Wan. He ran through the throng of fans giving high-fives, signed his autograph on merchandise and took selfies.

In a video from Warner Bros. Philippines, he seemed stunned as he addressed fans: “I’ve never received this much love in my life!”

He reciprocated the enthusiasm as he told fans “I love you, I do!” while slamming down a trident.