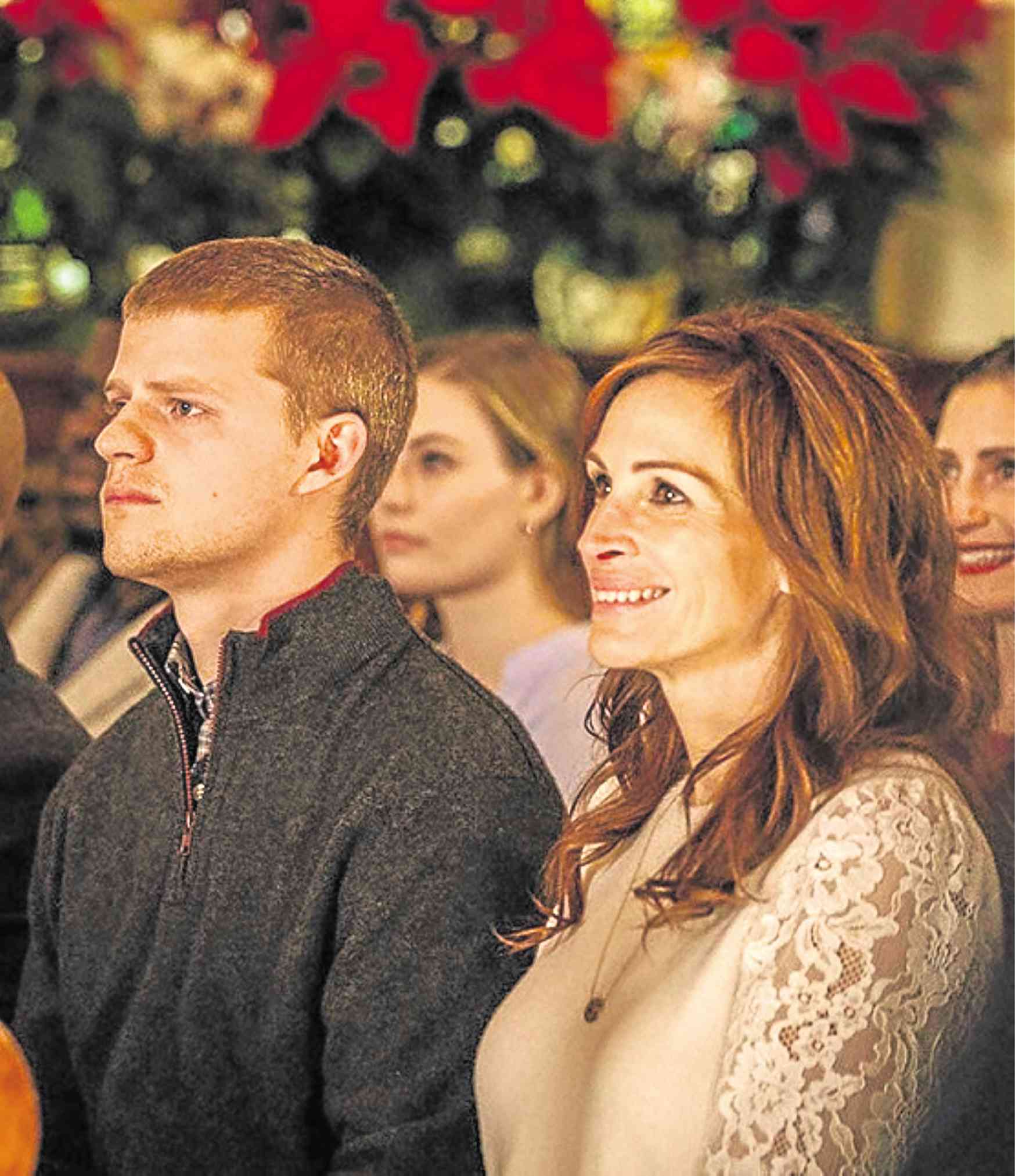 Julia Roberts (right) and Lucas Hedges in “Ben is Back”

Superhero flicks are having a field day jockeying for moviegoers’ and critics’ attention—“Spider-Man: Into the Spider-Verse” has a 98 percent score on Rotten Tomatoes, while “Aquaman” a “mere” 74 percent.

But, Julia Roberts is on a different kind of roll. Her big-screen drama “Ben Is Back” has merited an 83 percent “fresh” rating, while her first TV series, the 10-episode psychological thriller “Homecoming,” has gotten a formidable 99 percent approval score on the review aggregator website.

Not bad for someone who has only appeared in one film (Stephen Chbosky’s acclaimed “Wonder”) and lent her voice to breathe life into SmurfWillow in “Smurfs: The Lost Village” last year.

Without the 51-year-old superstar at its helm, it would have been reckless for Peter Hedges’ “Ben Is Back” to slug it out with the king of Atlantis and those friendly neighborhood human arachnids in our cineplexes this week. 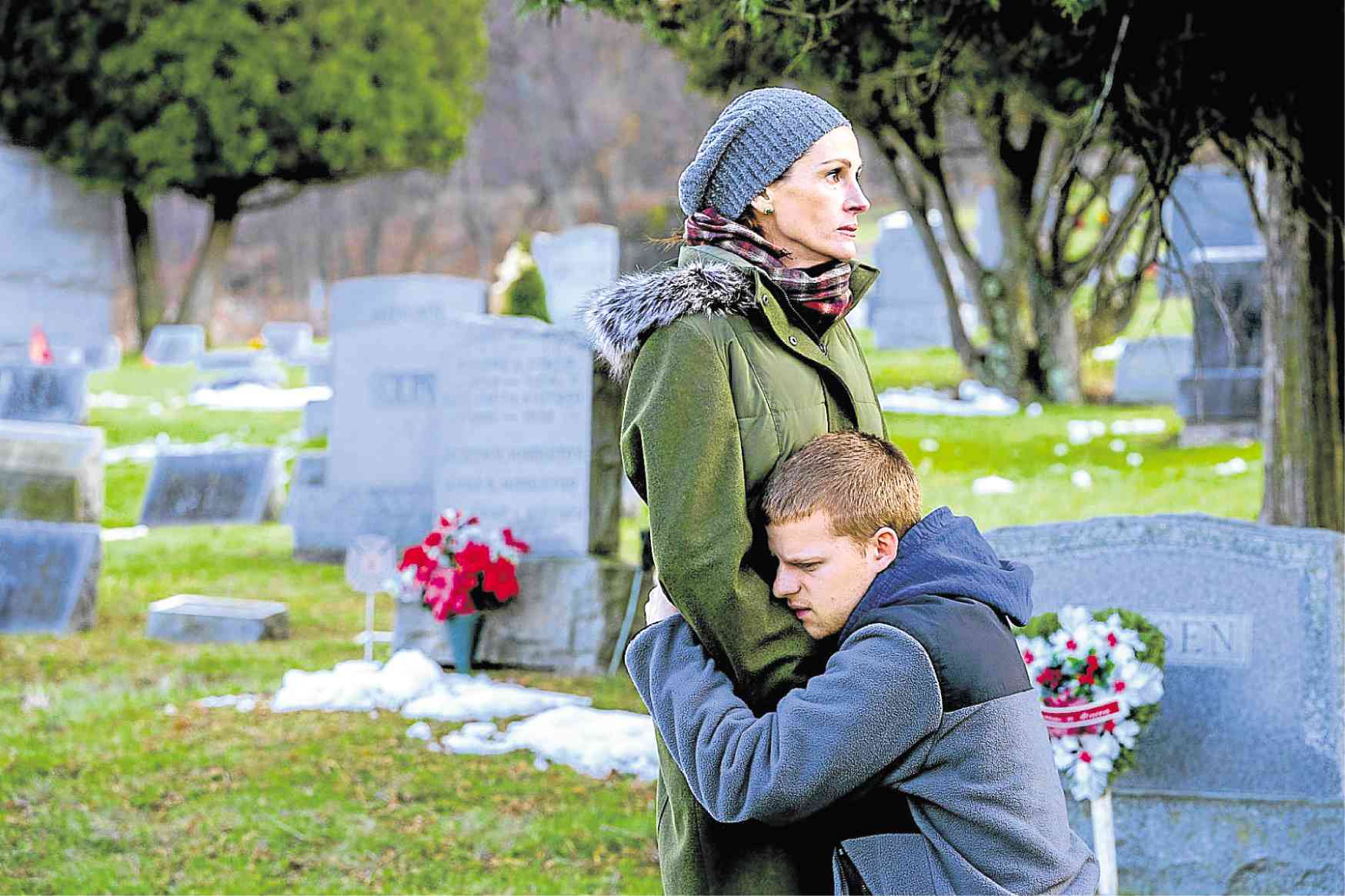 If you prefer domestic drama over slam-bang action before the Metro Manila Film Festival rams its “kwela” comedy capers, horror flicks and feel-good domestic dramas down viewers’ throats, “Ben” is the film to make a beeline for, because it provides a “food for the cinematic soul” alternative to water-doused mayhem and web-slinging spectacle.

“Ben Is Back” refuses to succumb to melodrama as it examines a few days in the life of Holly Burns (Julia) just before Christmas. Holly is gearing up for festive merrymaking with her teenage daughter Ivy (Kathryn Newton), adorable young kids (Mia Fowler, Jakari Fraser) and her husband, Neal (Courtney B. Vance).

The only wrinkle in Holly’s dream world is the absence of her troubled son, Ben (Lucas Hedges, who’s exceptional).

But, Holly’s plans for the holidays are turned upside down—and inside out—when Ben, a drug addict who’s having difficulty kicking the habit, comes home unannounced. The 19-year-old, who claims to have been “clean” for 77 days, has “temporarily” left the rehab facility to spend the holidays with his family.

Unfortunately, only Holly is enthusiastic about the unexpected reunion. Fearing relapse, Neal and Ivy are putting their foot down, giving Holly only one day to spend time with her son before she can drive him back to rehab.

Ben isn’t allowed to go to the mall, buy Christmas presents for his siblings, or even pee without Holly beside him. One minute you see her reassuring Neal and Ivy that “he’s clearly doing better,” the next minute she’s seen throwing all prescription drugs from their medicine cabinet into the garbage!

Holly’s holiday horror gets even dicier when Ben runs into dangerous people from his “former” life. We learn even later that Ben wasn’t just a user; he was also a drug dealer responsible for the death of young people he crossed paths with. He did everything to support his habit—he even had a “special arrangement” with his gay history       teacher in high school!

When Ponce, the family’s beloved pooch, goes missing, the worried mother and her beleaguered son realize what the latter’s “big comeback” has dangerously set off.

Holly loves Ben to bits, but is she willing to give up on her son just to guarantee the safety of the rest of her family?

It’s this “relatable” mix of forced optimism and fear that allows Julia to demonstrate her sharpening thespic chops as she slowly veers away from the feel-good romantic comedies that have catapulted her to superstardom. For moviegoers who only remember Julia for her dazzling smile and infectious laughter, this film is guaranteed to show the actress in a flattering new light.

More than Julia’s award-worthy portrayal, the film shines a scorching light on the dangers of drug addiction and the stigma that recovering users have to endure under the cruel glare of a ruthless and uncaring society. Unfortunately, it’s an unsettling scourge we can’t just sweep under the rug.