In ‘Beale Street,’ a radiant portrait of young black love 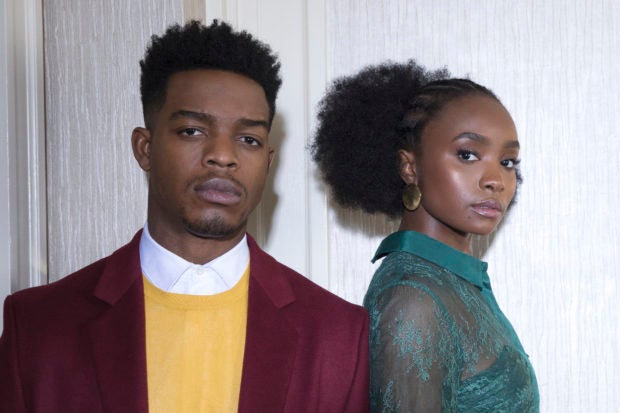 In this Nov. 30, 2018 photo, actor Stephan James, left, and KiKi Layne pose for a portrait in New York to promote their film “If Beale street Could Talk”. Image: Invision/Amy Sussman via AP

NEW YORK (AP) — Barry Jenkins years ago went on Etsy to have a James Baldwin quote embroidered onto his leather phone case. The line so resonated with the filmmaker that it’s also spoken in Spanish by a character in his short film “Chlorophyl”. Jenkins no longer has the case but when the Baldwin line is read to him, he quickly takes up the reciting.

“Love does not begin and end the way we seem to think it does,” he quotes. “Love is a battle, love is a war; love is growing up.”

That sentiment hovered over the making of Jenkins’ latest film, his lyrical, mournful portrait of a young black love torn tragically apart: the Baldwin adaptation “If Beale Street Could Talk”. It was there, too, in the anguished journey of Chiron on Jenkins’ best picture-winning “Moonlight”, a young man warped by the absence of affection. In both, love is a magical, mystical force molded by the obstacles of a harsh reality.

“I did an interview where people were saying you’re kind of building this career as a chronicler of black love. And I always hear that in the pejorative because I think people’s idea of love is so simple,” Jenkins said on a recent November morning. “But if I go back to that quote, yeah, of course, because I’m making these movies emotional wars, these emotional battles, and the evolution that comes out of that.”

In “If Beale Street Could Talk”, which opens in limited release Friday, Jenkins sought to capture an experience of love that has seldom been seen on screen, just as it had been seldom inked when Baldwin published his Harlem-set 1974 novel. In bringing “Beale Street” to screen, little was more important than finding the book’s central lovers: the humble but resilient 19-year-old Clementine “Tish” Rivers and Alonzo “Fonny” Hunt, the sculptor Tish has known since childhood.

“When I read a book, I don’t really see faces,” says Jenkins. “The hope was to find two young people who just seemed so young, vibrant, pure, uncorrupted by the world — who had chemistry.”

Jenkins cast Fonny first, handing the role to Stephan James, the Toronto-born, up-and-coming 24-year-old who played Jesse Owens in “Race” and John Lewis in “Selma”. KiKi Layne, a 26-year-old theater actress who hadn’t before acted in a film, landed Tish after Jenkins flew her to New York for a chemistry read with James.

“There was just an energy about KiKi and it’s evident in the film — just a raw, pure energy,” James says, sitting next to his co-star. “I realized her willingness to be open and to be giving with me pretty early on. In that chemistry read it was like: I just met you five minutes ago and now we need to touch faces and I’m proposing to you.”

They laugh, remembering how immediately “Beale Street” prompted their intimacy with each other. As they launched into shooting the film without the benefit of rehearsal, both actors quickly found they were forging a fictional relationship with broader meaning.

“We don’t really see two black people portrayed as soul mates,” says Layne. “I know Barry talks about that a lot. These two people are meant to be together from a very, very young age and that is powerful.”

Both actors differed, in ways, from Baldwin’s descriptions. In the book, each character is labeled as ugly (Fonny’s skin is referred to as “like raw, wet potato rinds”), and Tish and Fonny see a beauty in each other that others don’t. Yet there’s also the impression that their low opinion of themselves has been distorted by prevailing racist attitudes of appearance.

“The only thing I knew right away is that on screen these two people are so amazingly hot side by side,” Jenkins says. “The way Tish remembers the romance in the film is heightened so I thought, ‘F— it, they’re gorgeous. Can’t do anything about it.'”

The romance in Jenkins’ film is intensely idyllic, often captured in wordless but deeply expressive gazes between Tish and Fonny. But after Fonny is framed for rape — a kind of inescapable consequence of the racist traps set everywhere for black men like Fonny — their scenes are often shared through the glass of a prison’s visiting center. For those moments, Jenkins used Errol Morris’ “Interrotron” method of shooting, allowing the actors to make eye contact while looking into the camera.

James drew not just on Baldwin’s words for Fonny but contemporary corollaries — specifically Kalief Browder, the Bronx man who killed himself after spending 33 months on Rikers Island and almost two years in solitary confinement after being arrested at age 16 for a robbery he insisted he had not committed.

“Fonny struck me as somebody whose story was bigger than just Fonny’s story,” says James. “It felt like something that represented a whole bunch of voiceless young men in this country — African-American, Latino young men who are incarcerated. It just felt like Fonny was Exhibit A, one of so many.”

Layne, more outgoing and confident than her character, initially felt disconnected from Tish, who leans on her family’s support when Fonny is sent to jail.

“Like you see in the film everyone comes around Tish, everyone came around me, KiKi, as I was dealing with all these new experiences,” says Layne, who has since filmed an adaptation of Richard Wright’s “Native Son”. ”That’s when I started to make that connection to her. In playing Tish, I learned: That’s strength as well. That is a strong black woman that I am playing. I just have never seen it portrayed in this way.”

Since “Beale Street” premiered at the Toronto International Film Festival, it has made Layne and James breakthrough stars. And it has engendered emotional responses for how it expresses not just the injustices of Baldwin’s novel but the radiance of the love emanated from its characters — the “steady, somehow triumphant sorrow” Baldwin wrote of.

Brian Tyree Henry, who co-stars in a pivotal role, stumbled onto the stage after his first viewing. “Black love is beautiful,” he said, tearing up. “I don’t think I have ever seen it like that.”

For Jenkins, one of the most moving screenings was at the Smithsonian in Washington D.C. on IMAX.

“Right away it hit me: A woman who looks like Regina King (who plays Tish’s mother) and is doing this performance doesn’t get shown on an IMAX screen. But it’s cinema. And she’s doing so much with her face that it should be larger than life, so why the hell not,” Jenkins says. “I kind of understood this idea of people going in and seeing things that they haven’t seen or they don’t expect to see.” CC

‘A Star Is Born’ leads US Screen Actors Guild nominations