Andi Eigenmann has ventured into vlogging, and her first video is an attempt at baking a chocolate cake for daughter Ellie’s birthday. 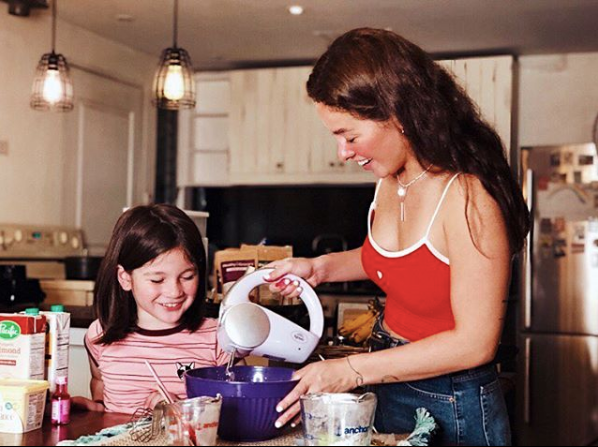 The actress posted the video on YouTube yesterday, Dec. 10, wherein she shows a step-by-step process of making a vegan cake—meaning it had no ingredients that were taken from animals.

“Ellie just celebrated her birthday. As a tradition that we’ve set, we bake birthday cake for ourselves,” she said. Ellie turned 7 on Nov. 23 and had a gymnastics-themed party on Dec. 1.

Eigenmann revealed that her daughter was shy—the Ellie who is bubbly in her mom’s social media posts preferred to stay quiet as she assisted her mom in the kitchen.

Baking is a self-taught skill for the actress, who said she collects recipes online and recently got into making vegan desserts. She also shared that baking helps them address Ellie’s picky eating.

“I didn’t grow up with a sweet tooth but Ellie did,” she said. “So the compromise that I decided to make to be able to satisfy her cravings at home every once in a while is to make healthy desserts.”

Besides the cake, the mother-and-daughter duo made frosting to top the cake. In decorating it, she said that she was inspired by the birthday cake Hagrid gave Harry Potter on his 11th birthday, as seen in the film “Harry Potter and the Sorcerer’s Stone.”

Like the cake in the movie, Ellie’s cake had pink frosting and had a misspelled message: “Happee birthdae Ellie.”

Throughout the video, Eigenmann stressed that her methods were no means perfect and that she still had more to learn about baking. What mattered, in the end, was that Ellie liked what they made, and thankfully she declared the cake “yummy.”  /ra