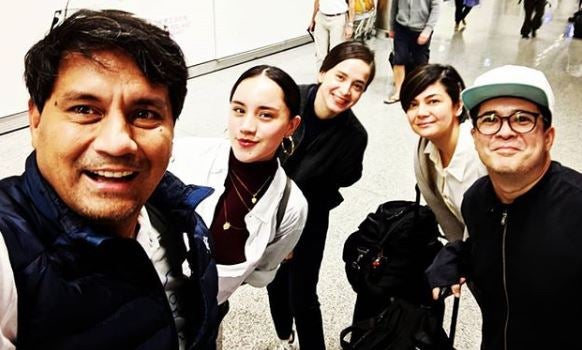 Richard Gomez and his family recently bumped into Aga Muhlach and wife Charlene Gonzalez while at the Cathay Pacific Lounge before their flight. It seemed the two friends had not seen each other in a while, as Gomez took to social media to share that he and Muhlach updated each other on what they had been doing lately.

Gomez, who is currently the mayor of Ormoc city, shared that he encouraged Muhlach to have another go at politics.

“We had some time to talk about things we’ve been doing,” said Gomez on Instagram on Dec. 11. “We talked about politics and I told him to run again because I know the public service is really in his heart.”

Muhlach first ran for a House seat representing the Partido area, the fourth district of Camarines Sur, in the 2013 electionss, but lost to Willam Fuentebella in a hotly contested race. Muhlach refused to concede and filed a petition to annul Fuentebella’s proclamation before the Commission on Elections (Comelec).

Apart from their catching up, Gomez shared that they did not have enough time to say their proper goodbyes as their flight to Hong Kong got delayed so that they had to rush to their connecting flight.

“We had to rush to our connecting flights otherwise we would have been left behind.”

Nevertheless, Gomez still managed to take a photo of him with wife Lucy Torres, daughter Juliana, Muhlach and wife Gonzalez before going their separate ways.

Countless celebrities have gone on and crossed over to the realm of politics after years in show business, showing that stars, too, can be public servants.

Former President of the Philippines Joseph “Erap” Estrada, for one, first gained fame as an actor and model before joining politics. Senate President Vicente “Tito” Sotto III started out as a songwriter, actor and TV program host. Former senators Lito Lapid and Bong Revilla Jr. used to be action stars, whereas “Star for All Seasons” Vilma Santos is now Batangas’ sixth-district Representative.

Celebrities were seen filing their certificates of candidacy last October for the 2019 elections, such as Jinggoy Estrada, Jolo Revilla, Ciara Sotto, Gary Estrada and Isko Moreno, among others.  /ra

Lolit Solis defends celebs who cross over to politics: ‘Give them a chance to serve’