After a long, bumpy journey, ‘Mowgli’ settles in at Netflix

LOS ANGELES (AP) — To say Andy Serkis has been through the wringer with his adaptation of Rudyard Kipling’s “The Jungle Book” is a bit of an understatement. 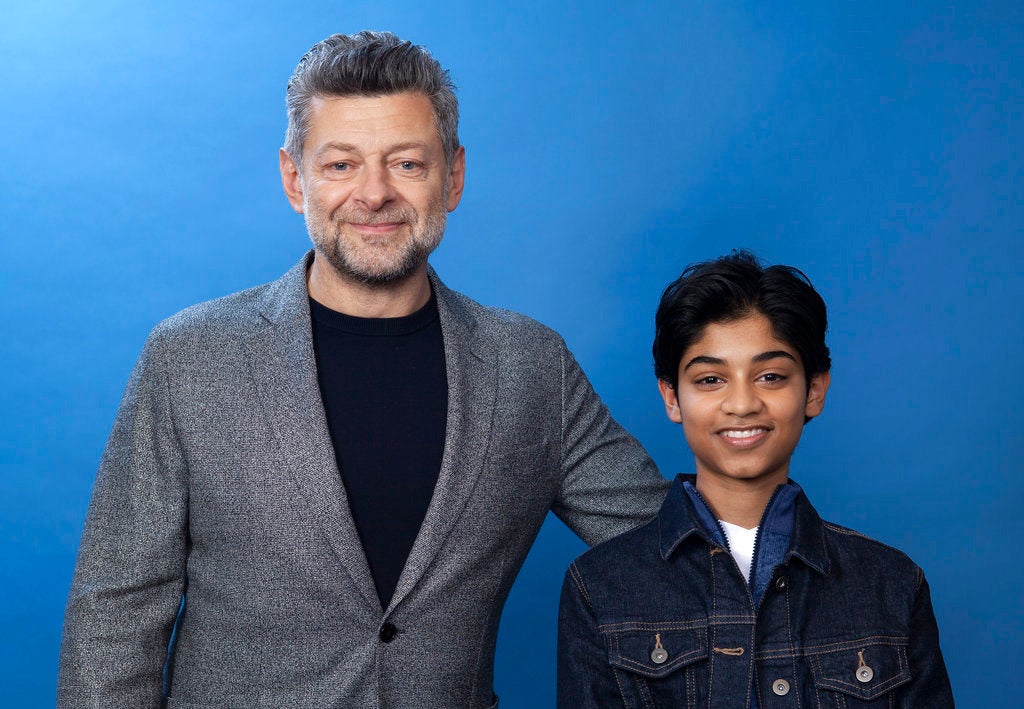 In this Nov. 28, 2018 photo, Andy Serkis, left, and Rohan Chand pose for a portrait at the Four Seasons Hotel in Los Angeles to promote their film “Mowgli: Legend of the Jungle,” streaming on Nextflix on Friday, Dec. 7. Image: Rebecca Cabage/Invision/AP

It was always going to be an ambitious project for a first time director — dark, intense and more in the spirit of Kipling’s stories, with a big studio (Warner Bros.) behind it, a blockbuster budget, A-list talent to match, from Christian Bale to Cate Blanchett, and all the high-pressure stakes that go along with that.

But five years ago when he signed up to direct, Serkis didn’t know that Walt Disney Studios would soon be announcing its own live-action Jungle Book, which would beat his to theaters by over two years and become a nearly billion-dollar box-office sensation. And no one would have guessed that at the 11th-hour this summer after promotions had already begun, his own studio would sell his version to Netflix.

“This wasn’t the easiest ride for anybody,” Serkis said on a recent afternoon. “It really did go through a massively long journey.”

Serkis was even able to direct another movie (“Breathe”) and star in at least one (“War for the Planet of the Apes”) during the post-production for “Mowgli: Legend of the Jungle” which debuted on the streaming service Friday.

The affable Serkis, kind and soft-spoken, who made his name as a pioneering talent in motion capture performance in “The Lord of the Rings,” ”The Hobbit” and “The Planet of the Apes” films, is just excited people are finally going to get to see his passion project.

The Callie Kloves-written screenplay takes the Mowgli myth away from the sunny, toe-tapping Disney versions, and back to Kipling’s original vision of the boy raised by wolves.

Actor Rohan Chand (“Lone Survivor”) was brought on to lead the film at age 10 (he’s now 14), opposite heavyweight actors like Bale, who plays Bagheera, Blanchett as Kaa, Benedict Cumberbatch as Shere Khan, Naomie Harris as Nisha and Serkis himself as Baloo.

This image released by Netflix shows Rohan Chand as Mowgli in a scene from the film, “Mowgli: Legend of the Jungle,” streaming on Netflix on Friday. Image: Netflix via AP

“I actually grew up reading Rudyard Kipling short stories,” Chand said. “I love Mowgli. He was almost like my hero in a way.”

In order to see through Serkis’s grand vision, Chand had to essentially shoot the film twice. First with the “A” talent like Bale and Cumberbatch, wearing motion capture tech on their faces and arms, and then again on location with a different set of actors mimicking the movements of the jungle animals.

“Rohan was extraordinary,” Serkis said of his young star who he helped guide through some intense scenes, emotionally and physically. “He had to endure real physical pain and a lot of technical challenges which he did with great ease.”

For parents wondering whether or not their young ones should watch, Serkis said it depends on you as a parent. The Motion Picture Association of America gave it a PG-13 rating.

“There is nothing in it that is gratuitous. There is no violence that is gratuitous. It is the lore of the jungle and there is violence and there is animal violence but it is not overly gory and it’s not enjoying it in a salacious way. It’s truthful storytelling and totally represents the level of darkness that’s in the book,” Serkis said. “It’s an emotional story, it’s an intense story. That’s what separates it from other versions.”

Serkis was deep into planning when Disney’s version was announced, and, although he knew the films would be quite different, there was still pressure to be first. Once that “went away” when Disney beat them to theaters, Serkis said, they decided to take the time they needed to refine the story and get the performances and the technology right.

The Netflix switch was not a third act complication Serkis could have foreseen, however.

In April, Serkis and a few cast members were part of a massive Warner Bros. presentation to the nation’s theater exhibitors in Las Vegas. Then this summer, on the last day of doing one of the final mixes for the film, he got a call from the studio.

“They said, we’ve shown it to Netflix. They really love the movie and want to acquire it,” Serkis said. He was shocked.

Selling a film to Netflix is not an unprecedented move. Earlier this year, Paramount sold the international rights for its Natalie Portman film “Annihilation” to Netflix, and worldwide rights to “The Cloverfield Paradox.” Universal made the same move with “Extinction.” It’s become a safe exit strategy for a major studio concerned about a possible underperformer, and none of the aforementioned films had a billion-dollar Disney success overshadowing its release like “Mowgli.”

Still, Serkis had imagined a premiere at a major festival, Cannes or Venice, and a big international theatrical run. And then he started to see the silver lining in making his film immediately available to 117 million Netflix subscribers in 190 countries worldwide. It’s also playing in select theaters too.

And as for his new partners?

“They’ve been incredible,” he said. “They want it to be seen.” NVG