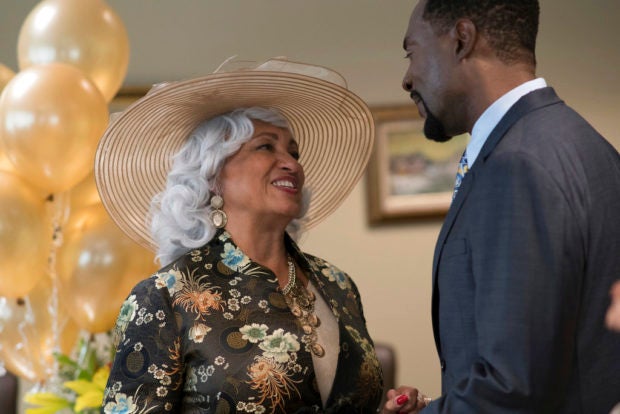 LOS ANGELES — When Daphne Maxwell Reid filmed a scene that required her to dash through woods and across streams, the younger actors scrambling alongside her were surprised.

“You’re keeping up with us?” was the sentiment, said Reid, 70, who played Aunt Vivian opposite Will Smith on “The Fresh Prince of Bel-Air” and starred with her husband, Tim Reid, in “Frank’s Place.”

“I stay ready in this business,” said the actress, who taped the action scene for an upcoming film. She’s currently on the small screen in “Jacqueline and Jilly,” as grandmother to a young woman struggling with a prescription drug addiction. The miniseries is streaming through Jan. 10 on UMC, the Urban Movie Channel.

Reid has shown before she’s capable of meeting challenges. As a model, she was one of the first African-American women featured on the cover of Glamour (preceded by Katiti Kironde, winner of the magazine’s “best-dressed college girl” contest) and was the first elected as homecoming queen at Northwestern University.

FEATURED STORIES
ENTERTAINMENT
LOOK: The Mountain from ‘Game of Thrones’ welcomes first son with wife
ENTERTAINMENT
Liza Soberano, Enrique Gil fly to US to be with actress’s ailing grandmother
ENTERTAINMENT
Billy Crawford to host local adaptation of ‘The Masked Singer’

The magazine coup was a breeze for Reid, who dabbled in modeling in college after impressing powerhouse agency head Eileen Ford. But even Reid was surprised when a brief photo session resulted in a shot of the smiling, fresh-faced beauty on Glamour’s cover in October 1969.

Her experience at her alma mater was less comfortable. She entered the Northwestern contest as a lark only to encounter a stinging backlash.

After she won, she said, the school “just ignored me. They didn’t put it in the yearbook, it wasn’t that ‘important,’ although the year before the girl had gotten a three-page spread.” In response, she cut ties with Northwestern after graduating until, decades later, she got an apology and an invitation to crown the new queen.

For “Fresh Prince,” she had to persuade viewers to accept her as Vivian after replacing original cast member Janet Hubert in the role.

Reid, who’s settled with her filmmaker-actor husband in his native Virginia, had the luxury of staying close to home when “Jacqueline and Jilly” shot in the state. The miniseries, starring Nikko Austen Smith (“Queen Sugar”), was written and directed by Victoria Rowell (“The Young and the Restless”), who’s also in the cast.

Reid doesn’t rely on acting as her only creative outlet. After a lifetime of taking photos, including on her travels, friends encouraged her to consider a gallery showing.

“I thought you have to be an artist to do that,” she replied. “They said, ‘Why don’t you be an artist?'”
On her 60th birthday, she decided to take them up on the suggestion.

“I had to figure out what that encompasses, and the journey was the joy,” said Reid, who had produced books, calendars and more with her photos, with distinctive doors her favorite subject. “I think it’s a metaphor for life for me. … Every decision you make is basically opening a new door.”

An avid cook, Reid has published “Grace + Soul & Motherwit”, which combines her favorite recipes along with stories from her life and trips. A skilled seamstress who made many of her own costumes as an actress, Reid has a clothing line of silk brocade jackets intended as wearable works of art.

Tim Reid said he’s pleased when his wife is recognized for “the many talents and creative skills that she has possessed since the day that I met her. She exemplifies the definition of a Renaissance woman.”

She’s also good at advice, such as how she and Reid, 73, have sustained their marriage of more than three decades: “The secret of staying together is respect, and knowing that something’s got to give and you can’t always win. … You’ve got to learn how to put your ego away.”

When it comes to the chances the couple may have missed as young African-Americans in a narrow-minded Hollywood, Reid’s frustration is mostly for her husband. He was a rare black producer working in TV in the 1980s when he made “Frank’s Place” and “Snoops” and continues to make films and documentaries, as well as train young filmmakers, but he’s best known for his on-screen work in series including “WKRP in Cincinnati,” ”Simon & Simon” and “Treme.”

“He’s very good at directing and he’s got great stories to tell,” his wife said. She agrees that if he were introducing the critically acclaimed but short-lived “Frank’s Place” today, when so many platforms are content-hungry and open to diversity, its fate would have been different.

“But we wouldn’t have had that wonderful cast,” she said, including Tony Burton, the corner man in six “Rocky” films. “It’s a timing issue.” MKH

LOOK: ‘Fresh Prince of Bel-Air’ cast reunites in one pic

‘Tis the season for more TV Christmas movies than ever

Read Next
Dolly Parton builds on film successes with ‘Dumplin’ song
EDITORS' PICK
Duterte meets with Cayetano, Velasco amid speakership issue
House to probe Facebook takedown of gov’t accounts
Smart poised to turn PH into ‘Smart 5G country’ with nationwide rollout
Water remains our saving grace right now
Feud is over: Velasco next Speaker on Oct. 14
Get 80% OFF Ignite 2020 Cyber Tickets starting 28 September
MOST READ
Velasco to take over as Speaker on Oct. 14
‘I offered to resign’ because of endless corruption, says Duterte
Gun attack in PMA: Air Force man killed, 2 others wounded
Duterte meets with Cayetano, Velasco amid speakership issue
Don't miss out on the latest news and information.

TAGS: Daphne Maxwell, The Fresh Prince of Bel-Air, Will Smith