KATOWICE, Poland (AP) — Arnold Schwarzenegger says he wishes he could travel back in time like the cyborg he played in “The Terminator” so he could stop fossil fuels from being used. 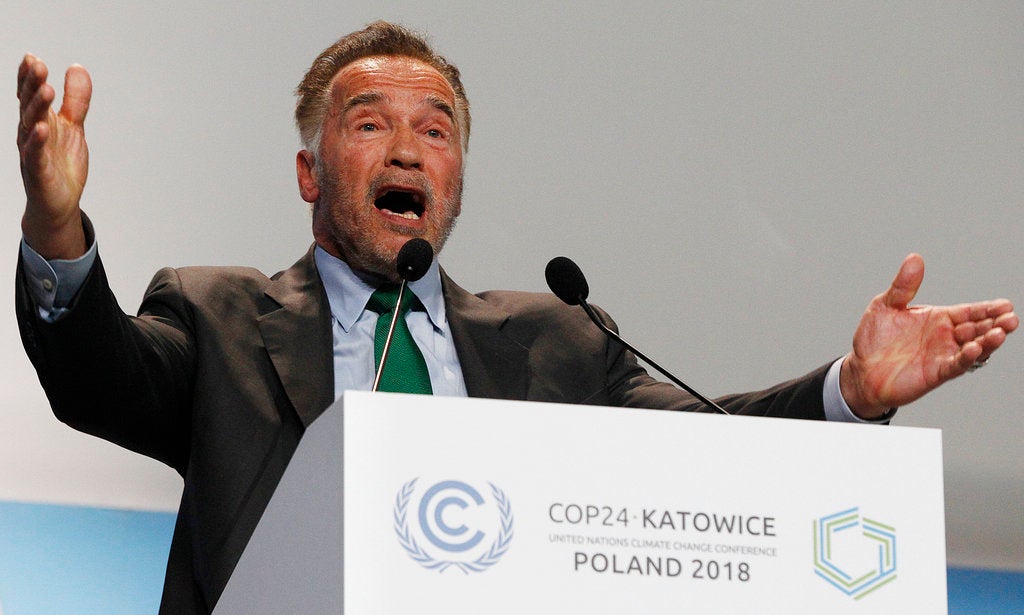 “If we would’ve never started in that direction and used other technology, we’d be much better off,” the actor and former California governor said Monday at the start of a U.N. climate conference in Poland.

Schwarzenegger also insisted that the United States was “still in” an international accord to curb global warming despite U.S. President Donald Trump’s decision to walk away from the agreement.

Calling Trump “meshugge” — Yiddish for “crazy” — for abandoning the accord, Schwarzenegger said the 2015 agreement has widespread support at the local and state levels even if the federal government isn’t on board.

American states, cities, businesses and citizens can do a lot to curb global warming, and representatives from those arenas should be invited to next year’s climate conference, he told the audience in Poland.

“And if you do that, I promise you: I’ll be back,” he said in another reference to “The Terminator.”

Schwarzenegger later told The Associated Press he has converted his signature Humvee trucks to run on hydrogen, electricity and biofuel and only allows himself to eat meat three days a week.

“I mean, maybe it tastes delicious, but I think we should think then and there before we eat about the world and about the pollution,” he said. “So I discontinued eating meat four days a week. And eventually, maybe we’ll go to seven days.” NVG

‘World way off course in dealing with climate’ – UN chief