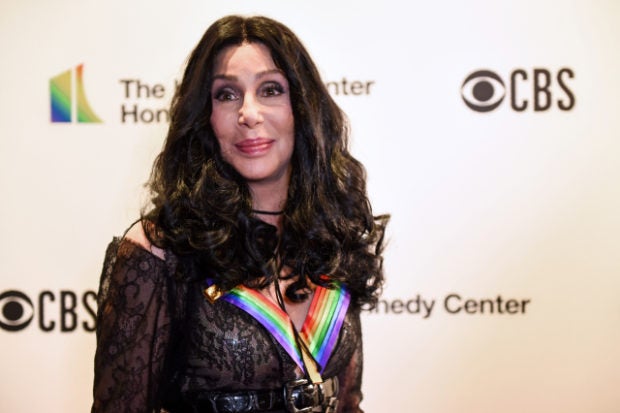 Hollywood A-listers and Washington politicos celebrated the best in performing arts Sunday at the Kennedy Center Honors gala, which opened with a standing ovation for late president George H.W. Bush.

In a first, the Kennedy Center — the performing arts complex that serves as a living monument to slain president John F. Kennedy — also paid tribute to a work of art, the musical sensation “Hamilton”.

Show host Gloria Estefan, a member of last year’s class of honorees, opened the festivities with a somber tribute to Bush, who died over the weekend at age 94.

“I think it’s appropriate to recognize the passing of a wonderful man who dedicated his life to service and who graciously attended this event many times during his administration, laughing, applauding, singing along and even shedding a tear from right up there in the presidential box,” said the pop diva.

The president traditionally sits next to the honorees, but last month, Melania Trump’s spokeswoman said the first lady and husband President Donald Trump — who is despised by many top cultural and entertainment figures — would once again skip the star-studded show.

Last year, they opted out after several honorees said they would boycott the event in protest at Trump’s policies.

Asked what she would have said to the president, the 72-year-old, sporting an off-the-shoulder black lace gown and multi-belt waist cincher, laughed and said simply: “Go away.”

For Kennedy Center president Deborah Rutter, the decision to honor “Hamilton” — the story of Alexander Hamilton and America’s other founding fathers, set to show tunes and rap anthems — was a no-brainer.

“It really felt like we shouldn’t wait to acknowledge that this work has transformed how we think about art,” Rutter said of the Pulitzer Prize-winning box-office smash that opened in New York in 2015.

“We should really note that this is a pivotal moment in the world of our performing arts.”

Lin-Manuel Miranda, the composer and lyricist behind the groundbreaking musical, performed several numbers himself along with members of the show’s original cast.

Speaking on the red carpet prior to the ceremony, the 38-year-old praised the Kennedy Center for the “celebration of our collaboration.”

Comedian Whoopi Goldberg showed up to honor Cher, and Paul Simon delivered a tribute to Glass.

Shorter, who was in Miles Davis’ quintet more than 50 years ago, was honored for his compositions and leading role in the creation of the jazz fusion genre as co-founder of the band Weather Report.

During his lengthy career, Shorter collaborated with music industry greats across genres, from Joni Mitchell to Carlos Santana and Steely Dan.

“My gratitude can be described like this: I’m very happy that many of you have reached across the aisle for something called ‘jazz,'” the 85-year-old said at a pre-gala State Department dinner Saturday.

‘The Face of America’

McEntire — one of country music’s household names — beamed as she strode the red carpet in a royal blue dress that made her signature red hair pop.

Cher — who began as one half of the folk duo Sonny & Cher and blossomed into one of entertainment’s most enduring shape-shifters — said she was still in shock over the award.

“Meryl told me once, ‘You do things for the art, and if the award comes it’s a bonus,'” the Oscar, Emmy and Grammy winner said, referring to acting legend Meryl Streep.

“I never thought I was the right person to win this award — because I’m a little bit out there.”

Glass, who at 81 is one of the greatest living composers known for his prolific output and wide-ranging approach to classical music, said he was simply “excited to be on stage with these other people.”

“The production of art in this country is astonishing,” said Glass, whose Symphony No. 12 based on David Bowie’s album “Lodger” will see its premiere in January at the Los Angeles Philharmonic.

“The arts are the face of America,” he continued.