Hollywood on the hunt for hit Japanese games

TOKYO — This year has seen a series of Hollywood announcements about future productions based on popular Japanese video games. Amid a box-office slump in U.S. theaters, Hollywood is turning its attention to gamers, with video-game developers being flooded with offers.

In late October, actress Milla Jovovich included the words “Captain Natalie Artemis. Ranger. Monster Hunter,” in an Instagram message she posted while she was on location for a role in the upcoming movie based on “Monster Hunter,” a popular game by Capcom Co.

In addition to “Monster Hunter,” productions based on other well-known Japanese games and characters have been announced, including projects featuring Super Mario of Nintendo Co., Pikachu of “Pocket Monster,” Sega Holdings Co.’s Sonic the Hedgehog and Capcom’s “Rockman.”

U.S. movies based on popular Japanese games started appearing in the first half of the 1990s, and the trend has steadily been growing. With streaming services such as Netflix becoming more popular and fewer people visiting movie theaters, Hollywood has been suffering from a shortage of hits.

According to the Motion Picture Association of America, while worldwide total box-office revenue rose 5 percent in 2017 from a year earlier, in the largest market of North America, the figure fell 2 percent.

An official at a major Japanese game developer said: “Recently, we have had many requests from Hollywood companies to work together, as they are struggling to find fresh material,” with the assumption being that projects based on games that have an existing fan base are more likely to attract audiences.

The Japanese game industry stands to benefit significantly from the trend. High-definition graphics are now commonplace in contemporary games, and development costs have skyrocketed accordingly. 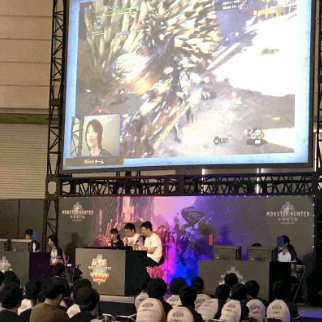 Development costs to produce one game were in the millions of yen in the 1990s, but now the figure can reach hundreds of millions to even billions of yen for a major title, according to industry sources.

Producing movies based on games will enable developers to earn revenue from their copyrights and sales of related goods, thus helping them recover production costs.

A series of six movies based on Capcom’s “Resident Evil” franchise has earned a total of more than ¥100 billion (about $880 million) in box-office revenue worldwide.

“The number of our fans that don’t play video games has increased because of the movies,” said Capcom President Haruhiro Tsujimoto, 54.

The more involvement by game companies in the production of films — by investing in film production companies, for example — the larger the benefits they can enjoy if the projects are successful.

However, the risks are never small if such movie projects end up failing.

“Final Fantasy: The Spirits Within,” released in 2001, crashed at the box-office. Square Co., the manufacturer of the original game and a predecessor of Square Enix Co., suffered a management crisis and significant losses.

“If a movie [based on a game] ends up being a flop, there is a risk that it could damage the value of the game franchise,” said Katsuhiko Hayashi, editor-in-chief of gaming magazine Shukan Famitsu.