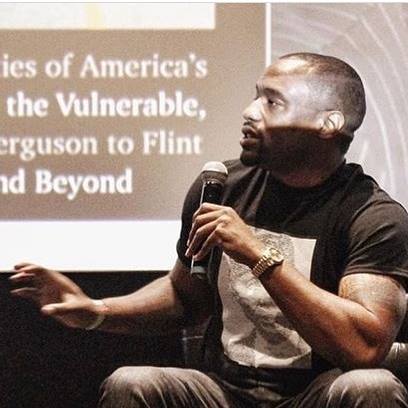 NEW YORK (AP) — CNN on Thursday parted ways with contributor Marc Lamont Hill after a speech the college professor made on Israel and Palestine at the United Nations.

A CNN spokesperson confirmed Hill is no longer under contract. The network did not give a reason, but the move comes amid objections to Hill’s speech by the Anti-Defamation League and other groups.

Hill, a professor of media studies at Temple University who had been a recurring political commentator on CNN, called for countries to boycott and divest from Israel in the Wednesday speech given for the UN’s International Day of Solidarity with the Palestinian People.

“We have an opportunity to not just offer solidarity in words but to commit to political action, grassroots action, local action and international action that will give us what justice requires and that is a free Palestine from the river to the sea,” Hill said in the speech.

The ADL and others said the “river to the sea” phrase is code for the destruction of Israel often used by Hamas and groups bent on its destruction.

“Those calling for ‘from the river to the sea’ are calling for an end to the State of Israel,” the ADL’s Senior Vice President for International Affairs, Sharon Nazarian, said in a statement, adding that the annual event at the UN “promotes divisiveness and hate.”

Hill sent a series of tweets responding to his firing and defending his speech.

“My reference to ‘river to the sea’ was not a call to destroy anything or anyone,” Hill said on Twitter. “It was a call for justice, both in Israel and in the West Bank/Gaza. The speech very clearly and specifically said those things.”