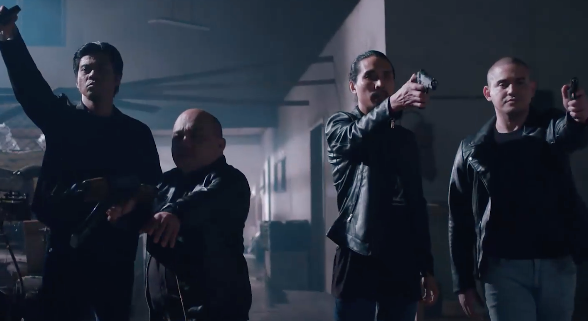 Since “Ang Pangarap Kong Holdap” failed to secure some cinema slots, it may not be able to have a proper premiere night too like other films.

One of the movie’s lead actors, Paolo Contis, previously lamented that the film could not be played in some cinemas because of its title, which was said to give a “bad connotation to the public.”

Instead of feeling down, Contis and his co-stars Jerald Napoles and Pepe Herrera celebrated the opening of their movie in their own way — through a private drinking session. This was seen on Napoles’ Instagram page on Tuesday, Nov. 27.

(Since we don’t have a premiere night because the movie’s title is “bad,” we just drank to think of another bad title.)

Contis too posted his photo from their fun night, and mentioned co-star Jelson Blay who was not with them. He told Blay in jest, “[S]umalangit nawa (Rest in peace)!”

While some cinemas refused to show their film, Napoles expressed gratitude to selected theaters who agreed to play “Ang Pangarap Kong Holdap.” The film will start screening today, Nov. 28.

“Ang Pangarap Kong Holdap” was given a Grade B by the Cinema Evaluation Board (CEB), and was rated R-16 by the Movie and Television Review and Classification Board (MTRCB). JB