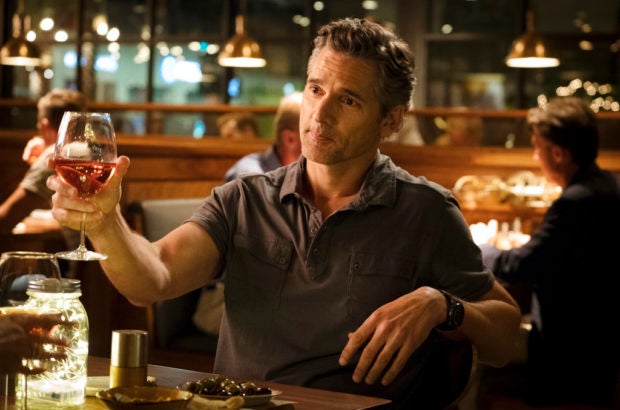 This image released by Bravo shows Eric Bana as John Meehan in a scene from “Dirty John,” a series derived from the popular true-crime podcast of the same name. Image: Nicole Wilder/Bravo via AP

NEW YORK — Eric Bana is bringing the popular true-crime podcast “Dirty John” to TV with a weekly series on Bravo.

Bana plays John Meehan and Connie Britton plays Debra Newell, a couple in California who met online and fell in love. John claimed to be a doctor, just back from volunteering his services for Doctors Without Borders in Iraq.

Newell, who had already been married multiple times and had grown children, thought John was the man she had always been looking for. Her kids, however, immediately didn’t trust him. As they make their concerns known, John succeeded in driving a wedge through Debra’s family.

A Los Angeles Times reporter, Christopher Goffard, covered the story and turned it into a wildly successful, addictive podcast. Bana didn’t tune in until he heard of the TV project.

“I downloaded and listened to all six very quickly and loved it,” he said. “There were parts that I couldn’t quite believe really happened.”

While Britton spoke to the real Newell to play the part, Bana didn’t have the opportunity to contact Meehan. He said he was fine with that and didn’t go looking for ways to exactly replicate the man. He said he was most concerned with portraying how Debra could fall for him, and why it would be so hard for her to walk away.

“We need to see what Debra saw, we need to get a sense that the attraction and the relationship was real and genuine and wasn’t a caricature so that was the tricky part, I think,” he said.

Bana also thinks people will be drawn to the conflict between Debra and her family, because of Meehan.

“It plays into relationship dynamics within families, what advice we take and listen to and clashes we can have.”

“These guys know what they’re doing. This is not like a normal relationship. He’s picking on his prey deliberately and targeting a particular type of personality. It’s never a fair match and it’s simple to judge for a lot of people, but I think the more research you do, the more you understand how someone stays with a person like that.” MKH

Amazon’s ‘The Romanoffs’ is a classic TV anthology series