TNT Boys preparing for the challenges of puberty 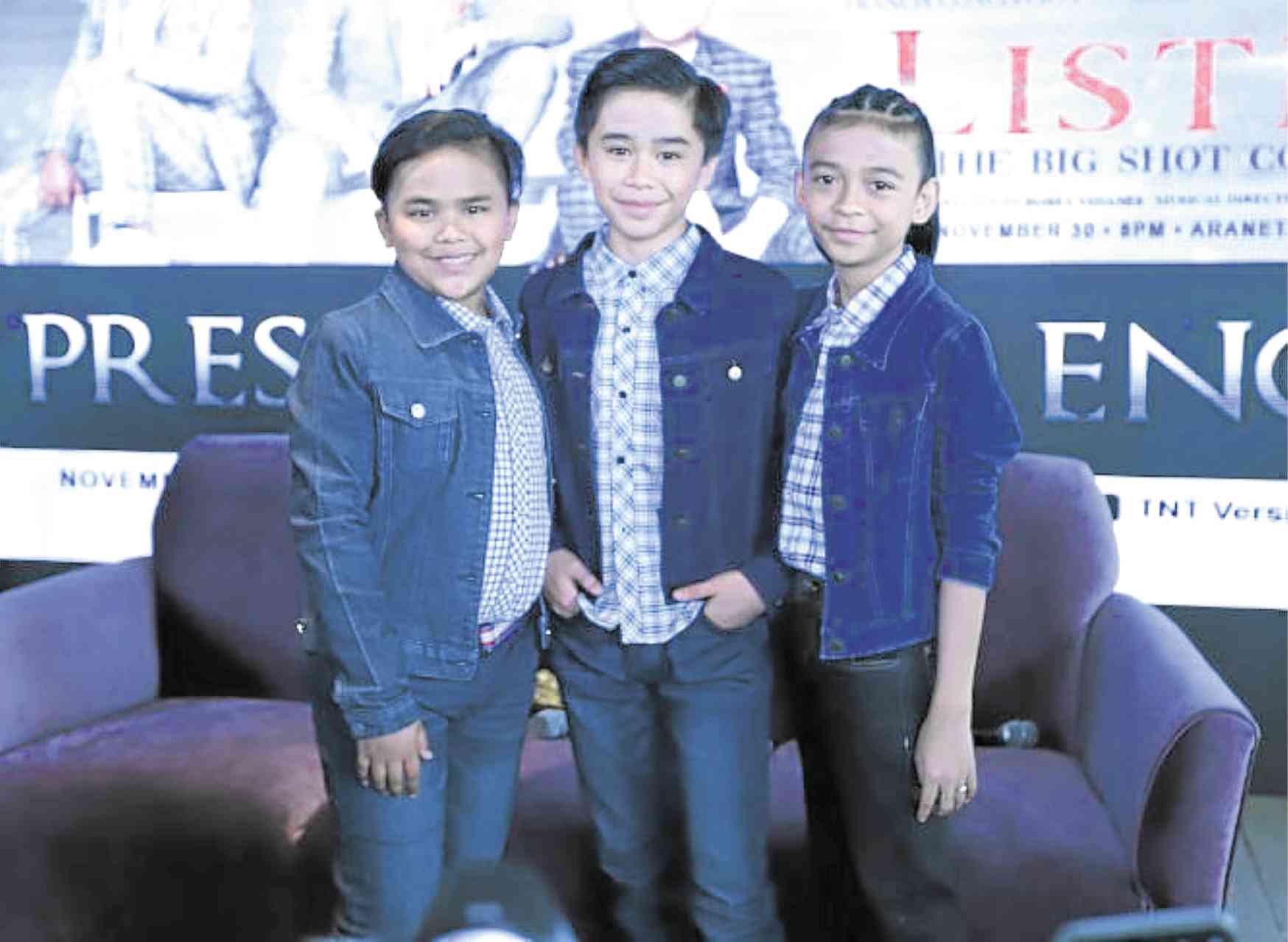 Members of the cute trio known as the TNT Boys are about to hit puberty.

This is why Francis Concepcion, 12, Mackie Empuerto, 13, and Keifer Sanchez, who will turn 14 on Nov. 25, are getting ready for the physical changes they will experience.

They are well aware that as they go through puberty, their voices will become deeper, and may sometimes crack or break as their bodies adjust to the changes.

“We know that, soon, we won’t be able to sing the same songs we are singing now. That’s why we have a vocal coach,” said Mackie, referring to Froilan Canlas, who was also a finalist in the talent search “Tawag Ng Tanghalan,” where the three boys were discovered.

“He helps us by teaching us how to adjust our tone in each song,” said Keifer.

Mackie, who is the most chatty among the three, added: “He teaches us how to look and feel confident when we perform. ”

“Yes, it’s because we’re scared to make mistakes,” Keifer interjected. “When this happens, we pray together.

Francis, Mackie and Keifer were finalists in the Kids edition of “Tawag Ng Tanghalan,” a segment in the noontime variety program, “It’s Showtime!” They were officially formed as a trio after their vocal showdown during an appearance in the talk show “Gandang Gabi Vice” last year went viral.

The TNT Boys has since performed in several international talent shows, including “Little Big Shots” in the US, UK and Australia. They have also performed for several heads of states, including Pres. Rodrigo Duterte, Singaporean President Halimah Yacob and Papua New Guinea Prime Minister Peter O’Neill.

Early this year, they were declared grand champions in “Your Face Sounds Familiar Kids.” In spite of these achievements, the trio—even with the challenges of puberty—shows no sign of stopping.

They will be staging their first major show, titled “Listen: The Big Shot Concert” on Nov. 30 at the Araneta Coliseum, with Vice Ganda, Jed Madela and K Brosas among the special guests.

To prepare for the concert, the boys said they made sure not to do anything that will have adverse effects on their voices. “We avoid eating anything that’s too sweet,” said Keifer, “or too salty,” added Francis. “I also try not to talk too much,” said Mackie.

Just like most adolescents, the three also admit to having misunderstandings. “Often, it’s about the division of songs,” said Keifer. “Or about who gets to belt out more,” added Mackie. “Sometimes, it’s also about what online games to play and who gets to be teammates,” said Francis.

“Our parents have nothing to worry about, though. We always patch things up after 10 seconds,” said Mackie.

When asked how they handle intrigues and bashers, Francis had this hilarious response: “We ignore them. ’Di kami pumapatol. No, no, no, no way … (To the tune of Jennifer Hudson’s version of ‘And I Am Telling You I’m Not Going’).”

Read Next
Love Knots, November 24, 2018
EDITORS' PICK
PNP: Checkpoints back in MECQ areas
Water remains our saving grace right now
A gem of a residence in the new normal
Smart 5G goes live
Been there, done that but what’s the difference between MECQ and GCQ?
BREAKING: 3,226 latest COVID-19 cases bring PH’s total to 106,330
MOST READ
MECQ guidelines in infographics
MECQ in NCR, other areas: Mass transportation suspended, quarantine pass required anew
Doctors group to Duterte: ‘There was never a call for a revolt’
Want higher pay? Join the police force, Duterte tells nurses
Don't miss out on the latest news and information.