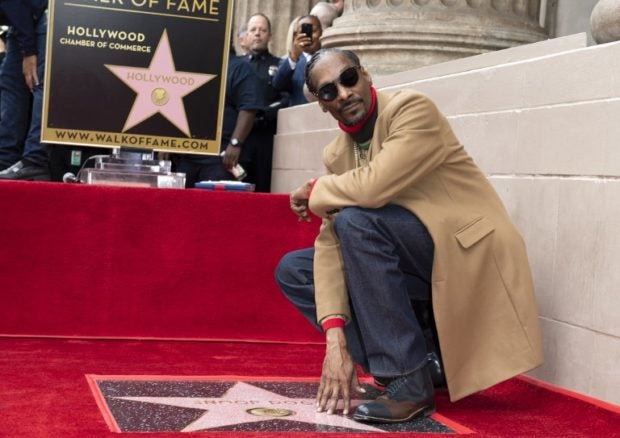 Rapper Snoop Dogg attends the ceremony honoring him with a Star on Hollywood Walk of Fame, Nov. 19, 2018 in Hollywood, California. Image: AFP/Valerie Macon

Snoop Dogg took to his Instagram page today, Nov. 21 (Nov. 20 in the United States) to share to his 28 million-strong fans a video clip of him crip walking around his star, wearing a pair of polished wingtips.

“All my bloods and crips. The challenge begins,” Snoop Dogg challenged his fans. “Go get ya B. Walk or C walk on at the Hollywood star of ya friendly neighborhood Snoop Dogg.”

The ceremony was a star-studded affair, with the likes of talk show host Jimmy Kimmel, record producer and rapper Dr. Dre and fellow rappers Pharrell Williams and Warren G, among others, gracing the event.

Despite coming so far, Snoop Dogg remains true to his roots, as he paid homage to Dr. Dre. Snoop Dogg rose to fame after Dr. Dre featured him in his solo debut album “The Chronic” back in 1992. The former has since sold over 35 millions albums worldwide.

He shared a picture on the same day of Dr. Dre and Warren G sitting among the crowd and the press during the ceremony, and extended his gratitude to his lifelong friends.

“These 2 created the lane for snoop doggy dogg to be who he is today,” he wrote. “Thank u @warreng @drdre.”

Snoop Dogg also shared a picture of Pharrell bowing to him and shaking his hand during the ceremony.

Snoop Dogg has since crossed over from music to film and television. He has appeared in “Training Day” back in 2001, “Starsky and Hutch” (2004), Scary Movie 5 (2013), and is the other half in the cooking show “Martha & Snoop’s Potluck Dinner Party” with Martha Stewart. JB