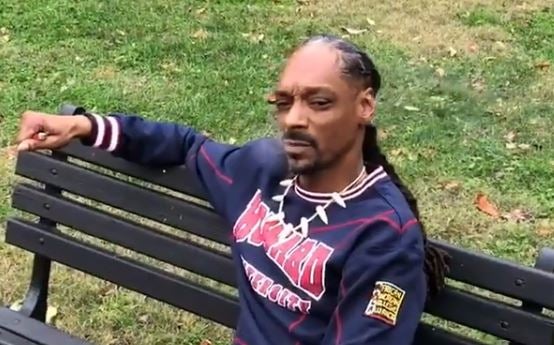 American rapper Snoop Dogg took the unorthodox route when it came to protesting against US President Donald Trump. He recently told his fans on social media that he had an urge to get up and go to the White House. The video was shared on Instagram last Nov. 8 and showed the rapper inside his house, contemplating whether he should go there to smoke weed or not.

“What would a dog do? Pee on a tree? Sh*t on a lawn? Perhaps smoke a blunt,” Snoop Dogg said in the video. “Should I do it? Should I do it? If 20,000 motherf*ckers hit this like button in less than 3 minutes then I’m gonna go to the White House to do it.”

20,000 likes, though, was a measly number for Snoop Dogg, who had over 28 million followers. It did not take long until he shared a video on the same day showing him inside the car on his way to the White House in Washington, DC.

In following videos, he can be seen sitting on one of the benches in what looks like Lafayette Park, smoking a blunt.

Snoop Dogg is an avowed marijuana user, even releasing a lifestyle website back in 2015 dedicated to his love for cannabis. The rapper, when asked then why marijuana was such a passion for him, shared that he enjoyed it for medical reasons and that it was deeply tied to who he was as an artist.

As he sat in the park, cross-legged and relaxed, he continued to smoke his blunt while watching from afar the goings-on in the White House.

“I’m at the White House smoking,” Snoop Dogg said in one of the videos at one point. “F*** the president.”

It is definitely not the most conventional way of protest, and neither was it Snoop Dogg’s first time for such manner of protest.

Back in 2017, he made his sentiments known about Trump when he released a music video for “Lavender,” which showed a police officer shooting a Trump lookalike clown with a gun-filled confetti. The video has since been slammed by the President himself through Twitter.

“Can you imagine what the outcry would be if @SnoopDogg, failing career and all, had aimed and
fired the gun at President Obama?” Trump wrote back in March 2017. “Jail time!”  /ra

Can you imagine what the outcry would be if @SnoopDogg, failing career and all, had aimed and fired the gun at President Obama? Jail time!