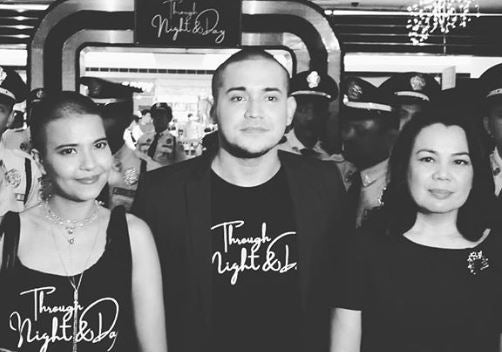 Filipino-Italian actress Alessandra de Rossi went the fearless route when she sported a buzz cut to the premiere of her film “Through Night and Day” with co-star Paolo Contis recently at SM Megamall.

The film, directed by Veronica Velasco, is the first ever pairing of the two and sees them as lovers who journey across picturesque Iceland.

Viva Films shared some scenes from the premiere yesterday, Nov. 12, on its official Instagram account, one of which is a picture of De Rossi with Contis and Velasco surrounded by mall security guards. In other photos, big sister Assunta de Rossi and close friend Heart Evangelista, among others, can be seen in support of Alessandra.

FEATURED STORIES
ENTERTAINMENT
Kris Aquino bares why she turned down romance with Vice Governor Leviste
ENTERTAINMENT
Dina Bonnevie on Coney Reyes: We have forgiven each other
ENTERTAINMENT
Lorna: Peacemaker needed between Coco and Robin
View this post on Instagram

De Rossi, on her end, shared today, Nov. 13, a candid motion blur picture of her from the premiere where she appeared to be moving through the cinema while looking straight ahead.

De Rossi’s photo has since garnered 6,000 likes from fans and admirers, with many complimenting her for rocking the daring look.

Another, meanwhile, asked De Rossi in jest whether she shaved her head because she was jealous of co-star Contis.

“No one can rock a shaved head more than you do, Ate!” wrote a certain Danica (@danicatalyst). “Pero yung totoo inggit ka kay @paolo_contis no?”

De Rossi also did not hide her excitement for “Through Night and Day” as she extended her congratulations to co-star Contis and director Velasco.

“Through Night and Day” is slated for a Nov. 14 release in cinemas nationwide.  /ra

WATCH: Paolo Contis, Alessandra De Rossi go on a journey around Iceland in ‘Through Night and Day’