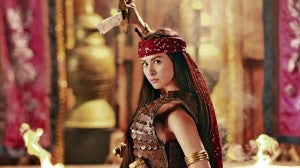 The competition on TV is at a season high, with new teleseryes fielding big star power, production values and “unique selling propositions” designed to upstage rival series in the ratings race.

“Amaya” stars “Primetime TV queen” Marian Rivera in an ethnic drama that entices viewers with its exotic look and “elemental” conflicts surrounding a warrior princess who is scorned by her noble father’s wives and other offspring.

The show’s ethnic look is exotic and engaging, but it alone can’t sustain viewer interest, so the series’ script piles one heavy-breathing melodramatic flourish on top of another, including “royal” envy and greed, passion, child abduction, attempted assassination, etc.

Unfortunately, those dire events are pretty much what you find in many other teleseryes, so when push comes to shove, the ethnic element in “Amaya” is pretty much just “eye candy.”

As for the performances, Marian has (as of this writing) still to make her appearance as the series’ young-adult title character. We trust that, after all the attendant hype, she can do justice to her interesting role as a warrior princess in a land of predominantly male datus and combatants.

An aside: Some people are extravagantly building Marian up as the “queen” of TV teleseryes, a title that other popular actresses would definitely question. So, the subjective elevation of the actress to “regal” status could prove to be inflammatory and thus counterproductive, because it may raise viewers’ expectations of her latest portrayal to unrealistic – and unachievable – levels.

It would be fairer to Marian, therefore, for the show’s spinmeisters to back off, tone down and wait for Marian to prove herself in her latest and perhaps biggest teleserye outing.

Other notes: “Amaya” marks the comeback of Raymond Bagatsing to TV acting, in the key role of the princess’ father. The actor’s dark looks and terse and even laconic acting style lend themselves well to his comeback effort.

But, we wonder why the noticeably older Gina Alajar was cast as his envious and scheming first wife. The age difference becomes a problem, especially when she attempts to entice him to produce the son he longs to have (hence his decision to turn Amaya into a warrior).

Perhaps Gina was cast because the story needs a strong villainess? Alas, the veteran actress’ thespic gifts are generally made insufficient use of, because her character’s main motivations of jealousy, anger and greed are standard TV drama fare, and don’t really need a superlative actress like her to project them.

Well, it’s still early days for the visually arresting series, so we trust that its storytelling firms up and attain greater and more organic focus and impact in the weeks to come.

That, and a convincingly exciting and thespically “regal” portrayal by Marian Rivera, would effectively silence all naysayers, us included, and affirm her ostensible right to claim local television’s “throne.”