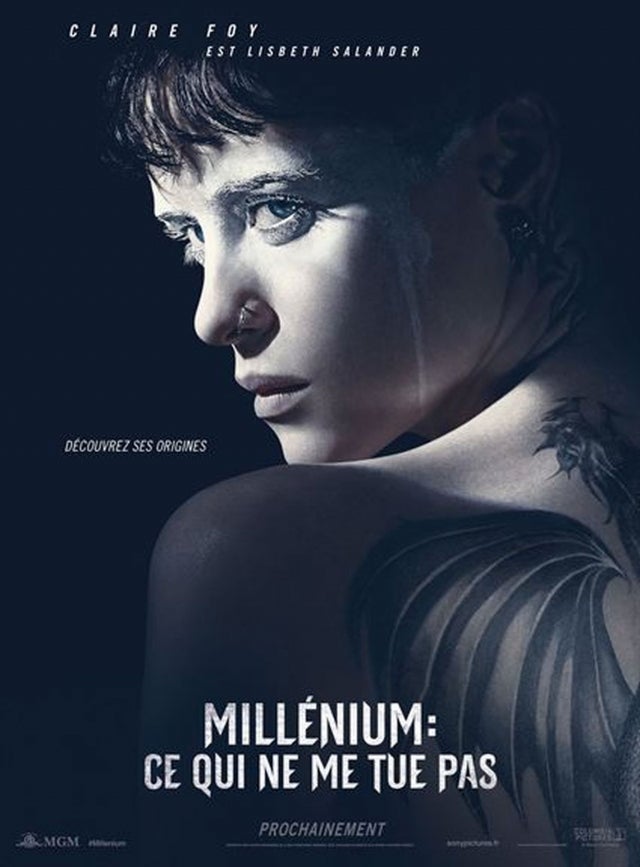 Fresh off her Emmy-winning turn as the British monarch on Netflix’s popular drama, Claire Foy is tackling one of the heroines of modern crime fiction — Salander, a Swedish hacker — in “The Girl In The Spider’s Web.” Image: Soy Pictures / AFP

When director Fede Alvarez chose Claire Foy to star in the latest film in the “Girl with the Dragon Tattoo” series, he had no doubt the 34-year-old actress would easily transform herself into the intrepid cold-as-ice hacker Lisbeth Salander.

After all, the British actress has experience playing a fearless woman with ice running through her veins when needed — Queen Elizabeth II.

“I saw ‘The Crown’ one day and I was like, ‘That’s it, this is all Lisbeth,’ because as crazy as that sounds, there is so much in common with the challenges of playing someone like Lisbeth or Elizabeth,” Alvarez told AFP in a recent telephone interview from Rome.

Fresh off her Emmy-winning turn as the British monarch on Netflix’s popular drama, Foy is tackling one of the heroines of modern crime fiction — Salander, a Swedish hacker — in “The Girl In The Spider’s Web.”

The film, which opens Friday in US theaters, follows Salander as she is hired to hack into a defense program that can control the codes for the world’s nuclear weapons.

The role — previously played by Noomi Rapace and Rooney Mara — represents a departure for Foy, allowing the actress to showcase a different, darker side.

But the Uruguayan director says her regal role prepared her well.

“The queen is never allowed to show she’s angry or sad, always keeping a straight face in front of very different situations … and Lisbeth doesn’t allow herself to show her true emotions — she’s pushing those emotions deep inside her.”

“Spider’s Web” is based on a novel by David Lagercrantz, who was chosen to continue the so-called “Millennium” series begun by the late Stieg Larsson.

The film has been met with mixed reviews, with industry magazine Variety saying fans are likely to be disappointed with the way Salander is portrayed.

“The Girl in the Spider’s Web …is more vested in fiery external explosions than internal pain, reducing Salander to a quirky Batgirl-like figure, soft-pedaling her feminism, practically eliminating her queerness, and tossing in an American so the US can save the world,” it said.

The Rotten Tomatoes review aggregation website, which gave the crime thriller a 64 percent rating, said the critics’ consensus was that the movie “distills the action elements of its source material for a less complex — yet still reasonably effective — franchise reboot.”

Alvarez, who directed the 2016 hit thriller “Don’t Breathe,” said that as with any novel, it was difficult to adapt Lagercrantz’s work for the big screen and still remain faithful to the plot.

“You have to sacrifice a lot of things — otherwise, it would be an eight-hour movie,” he said.

He said he used the screenplay written by Steven Knight (“Peaky Blinders”) and Jay Basu, and adapted it to make it more personal.

“Basically it was really making it about secret and shame, always about the family, whatever the story, as big as it is, even if the stakes are the world — it always has to be about yourself, something very close to the main character,” he said.

“It’s also about a sin, something they have committed and they have to atone for.”

In the case of Salander, the backstory concerns her estranged sister Camilla — played by Dutch actress Sylvia Hoeks (“Blade Runner 2049”) — who she hasn’t seen since she escaped their abusive father, a Russian crime lord.

Hoeks said the movie was shot just as the #MeToo movement erupted and was impacted by the raft of allegations of sexual abuse that surfaced at the time.

“We discussed it — it was a very hot topic,” she said. “We didn’t really change the script but for me, it was like the story and reality went hand-in-hand all of a sudden.” AB

TAGS: Claire Foy, Lisbeth Salander, reboot, Sylvia Hoeks, The Girl in the Spider's Web, The Girl with The Dragon Tattoo