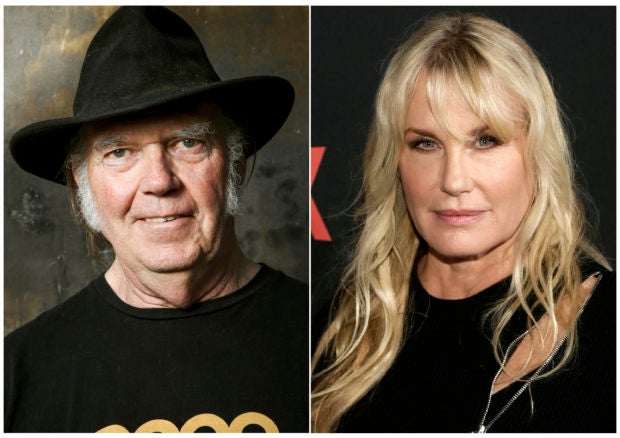 This combination photo shows Neil Young posing for a portrait in Calabasas, Calif. on May 18, 2016, left, and actress Daryl Hannah at the Netflix “Sense8” Season 2 premiere in New York on April 26, 2017. Young is calling Daryl Hannah his wife. The 72-year-old Rock and Roll Hall of Famer posted a new performance of his 1970 song “Ohio” on his website Wednesday and said that “My wife Daryl and I put this video together.” Image: AP

The 72-year-old Rock and Roll Hall of Famer and the 57-year-old “Splash” actress had been utterly mum on the subject of their marriage since reports that they wed in California in August.

But Young said in a pro-gun-control post on his website Wednesday featuring a new performance of his 1970 song “Ohio” that “My wife Daryl and I put this video together.”

The couple’s representatives didn’t reply to requests for comment.

It’s the third marriage for Young and the first for Hannah, who had previous relationships with Jackson Browne and John F. Kennedy Jr.

She wrote and directed the Netflix movie “Paradox”, starring Young, earlier this year.

Young’s hits include “Hey Hey, My My” and “Heart of Gold”. CC

Neil Young lashes out at Trump, world on ‘Visitor’

Neil Young breaks out the orchestra

Read Next
Hollywood submarine flick runs aground in Russia, Ukraine
EDITORS' PICK
National COVID-19 vaccination drive gets over 5.3 million people vaxxed so far
This new condo in the South will make you want to turn a new leaf
Pandemic prognosis: Where does it go from here?
Google won’t accept election ads for 2022 national polls
Legarda: Ending Violence Against Women, a cause for all
Smart offers wireless fiber-like speeds to Filipino homes with country’s first 5G Prepaid Home WiFi
MOST READ
Bongbong Marcos to face another disqualification case
Christine Bersola, Julius Babao cleared of cancer after colonoscopy, endoscopy
A Merry Bongbong
Pandemic prognosis: Where does it go from here?
Don't miss out on the latest news and information.