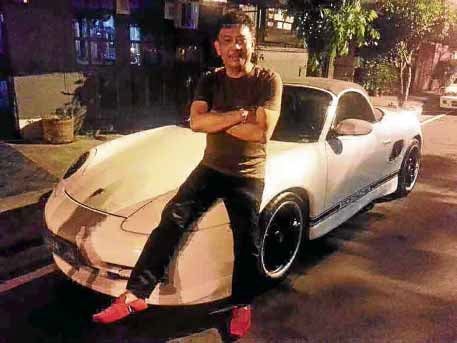 It was not so much sorrow as affection that friends, colleagues and fans of Rico J. Puno expressed upon learning that the Filipino pop music legend died of cardiac arrest early on Tuesday at St. Luke’s Medical Center in Taguig City. He was 65.

“I love him,” said singer Bituin Escalante. “We toured Europe in the early 2000s. It was more fun hanging out with him than going sightseeing.”

In a tribute, broadcast journalist and author Lourd de Veyra reposted an article he wrote in 2010 in which he pointed out not only the late entertainer’s legacy as “one of the greatest singers on the face of the earth, past or present, local or international,” but also Puno’s naughty, if risque, sense of humor.

One particular joke nearly got Puno in trouble in 2011.

While performing at a hotel in Mandaue, he described then Cebu Gov. Gwen Garcia, who was in the audience, as “the most beautiful governor” in the country, but added: “Is that Vicky Belo or Dr. Calayan?”

Belo and Dr. Manny Calayan are two of the country’s most prominent celebrity dermatologists.

Because of the alleged slur, a Cebu provincial board member moved to declare Puno a persona non grata, but later withdrew the motion after the singer apologized.

Puno told the Inquirer that, at a concert a few years ago, he had spotted former first lady Imelda Marcos.

“She’s my wedding sponsor,” he told the audience. “I said, ‘Madam is a genius. Would you believe, until now she hasn’t been jailed?”

He was still in college at Philippine School of Business Administration when Enrico de Jesus Puno — he said he was named after the Italian tenor Enrico Caruso — started as a folk singer covering Joe Cocker and Barry Manilow.

He eventually landed gigs at various bars and clubs, most notably at Spindle in Quezon City, which Fernando Poe Jr. frequented.

Puno fondly recalled the night FPJ brought him from Spindle to the actor’s Greenhills residence, and asked him to sing privately to Susan Roces, who was in a foul mood.

Sensing that the couple had a quarrel, Rico was obliged to sing John Denver’s “Sunshine” over and over until he said, “Ma’am, sige na po, ngumiti na kayo (Ma’am, won’t you please smile).”

Poe’s daughter, Sen. Grace Poe, said she could not forget Puno serenading her mother then.

She lauded him as “an icon and a shining symbol of Original Pilipino Music (OPM).”

‘The Way We Were’

He became Pinoy pop’s best exponent of OPM, truly deserving of the title his record label gave him: The Total Entertainer.

Senate President Vicente Sotto III, a singer and songwriter before entering politics, credited Puno for paving the way for the acceptance of local Filipino artists by the country’s elite.

“Before [Puno’s] emergence in the local music industry in 1975-76, the elite in society did not care much about OPM. Seldom would you find a local pop singer’s album in their homes,” Sotto said.

“Personally I feel sad,” Panelo said. “We had a duet, I think, four years ago in my show. He’s a personal friend.”

Puno had bought the rights to the Spindle name, putting up his own Spindle bar on Tomas Morato Avenue in Quezon City. He later opened the Coricks and Chico Rico bars in Makati.

In 2014, at Chico Rico, the Inquirer saw Puno, with his earthy, soulful voice, jamming with the band.

“Listen,” said music promoter Wing Inductivo, “he’s always in tune. That’s why I like him.”

After the gig, he kept talking till 2 a.m., retelling more anecdotes from his storied career.

Puno wasn’t only an entertainer. He was also a politician who served as councilor of Makati City’s first district from 1998 to 2007.

He returned to politics again as councilor in 2016 under Mayor Abby Binay’s United Nationalist Alliance party.

“For the people of Makati, Councilor Puno meant more than an accomplished artist and entertainer. He was a public servant who dedicated over a decade of his life looking out for the welfare of residents and promoting the city’s economic development,” Binay said.

Before he died, Puno parted ways with Binay.

He was one of the 13 city councilors who had withdrawn support for the mayor, backing her brother, Junjun, in next year’s election. —With reports from Dexter Cabalza, Leila B. Salaverria and Julie M. Aurelio