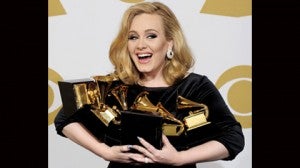 Adele poses backstage with her six awards at the 54th annual Grammy Awards on Sunday, Feb. 12, 2012 in Los Angeles. Adele won awards for best pop solo performance for "Someone Like You," song of the year, record of the year, and best short form music video for "Rolling in the Deep," and album of the year and best pop vocal album for "21." (AP Photo/Mark J. Terrill)

LOS ANGELES—The splintered music world truly coalesces only one night of 365 for the Grammy Awards, and this year was united in the triumph of recovered British soul singer Adele’s trophy haul and the tragedy of Whitney Houston’s death.

The 23-year-old Adele swept the major honors of song, record and album of the year on Sunday (Monday in Manila) for her lost-love epic “21” and its driving single “Rolling in the Deep.” She picked up her final two awards after making her first public performance in months after being sidelined for throat surgery.

Her total of six Grammy—including for best short video and best pop artist—matched Beyonce for most Grammys ever won by a female act.

After seeming almost sheepish in picking up some of the trophies (“This is ridiculous,” she said after winning record of the year), Adele’s tears flowed upon winning best album.

“This record is inspired by something that is really normal and everyone’s been through it—just a rubbish relationship,” she said. “It’s gone on to do things that I can’t tell you how I feel about them. It’s been the most life-changing year.”

The show was packed with triumphant comebacks and fond farewells.

Katy Perry, sporting blue hair and metallic body armor, stormed back defiantly in her first big public performance after husband Russell Brand filed for divorce in December last year, and country singer Glen Campbell, 75, made what could be his last Grammy appearance after being diagnosed with early stage Alzheimer’s disease.

Just 10 of the 78 Grammys were handed out during the three-and-a-half-hour telecast from the Staples Center, clearing the way for some eclectic line-ups on stage that paired Rihanna with Coldplay, and rapper Lil Wayne with DJ David Guetta. 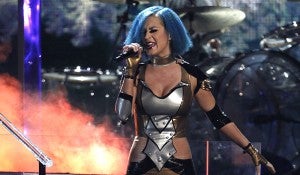 As expected, the music industry’s biggest night belonged to Adele, who won all six of the Grammys she had been nominated for.

But the biggest applause came after Adele gave her first major public performance following throat surgery in November that millions of her fans worldwide feared might destroy her signature husky voice.

Starting out a cappella and framed by a single spotlight on the vast stage, Adele overcame initial nerves to belt out “Rolling in the Deep” and enjoy a standing ovation.

“I need to thank my doctors I suppose, who brought my voice back,” she said.

Memories of Houston, who was found dead in as yet unexplained circumstances just 24 hours earlier in a Los Angeles hotel room, made for a nostalgia-filled night. Houston herself won six Grammys.

Grammy host LL Cool J started the evening with a prayer “for our fallen sister Whitney Houston” but said the industry would remember her “the best way we know how, with a song.”

Grammy and Oscar-winner Jennifer Hudson did the honors, singing Houston’s biggest hit “I Will Always Love You” with just a slow piano and the “bitter sweet memories” of the song’s lyrics. 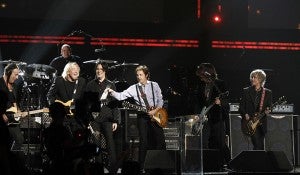 Chris Brown returned to Grammy’s embrace, three years after his career nosedived when he beat up girlfriend Rihanna on the eve of the 2009 awards show.

Brown won best R&B album for “F.A.M.E” and performed twice on Sunday’s show. “I thank the Grammys for letting me get on the stage and do my thing,” he said.

Country star Taylor Swift turned the table on critics of her off-key Grammy performance two years ago by winning two awards for “Mean”—in which she lashed out at her haters—and delivering a flawless performance that changed the words of the chorus to “Some day, I’ll be singing this at the Grammys.”

The Grammys took a walk down memory lane with a Beach Boys medley featuring a nervous looking Brian Wilson—the musical genius behind the 1960s California sound—and four other early members of the “Good Vibrations” band, who plan a world tour in 2012.

Nicki Minaj lost the best new artist Grammy to indie rocker Bon Iver. But the rapper staked her claim to succeed the provocative Lady Gaga with a religious-themed performance of “Roman Holiday” that saw her levitating from the set of a church.

Adele was the uniting force. Her album was a critical hit and commercial powerhouse, and it would have been an upset if she hadn’t joined Eric Clapton, the Dixie Chicks, Carole King, Paul Simon and Christoper Cross among artists to sweep the three biggest awards in one night.

Elsewhere, some of the night’s biggest thrills came from a small tent outside the main concert venue where Foo Fighters played a rousing version of “Walk,” and Brown, Deadmau5, Guetta and Lil Wayne gave Grammy viewers their first taste of dance electronica.

Forced to be quiet

Speaking to reporters,  Adele admitted she had been scared when told she had to have the surgery—but that, ultimately, it was good to be forced to silence her usual “mouthy” manner.

“It was a bit traumatic having to have the surgery … being silent in such a noisy world—everything’s so noisy in my world—it was actually a bit of a blessing in disguise,” she said.

“Thank God my voice healed, and I stuck to all the rules that they gave me. And I’ve actually never been happier … I really enjoyed having to be quiet. I’m so mouthy, it was quite nice to be forced to be quiet,” she added.

During the show, Adele took to the stage with producer Paul Epworth before launching into the worldwide hit from her breakthrough second album “21.”

‘Singing is my life’

Her solo voice soared out of the darkness into the opening lyric, before a thumping drum kicked in, followed by a choir for the chorus. She earned a raucous standing ovation.

Adele—known for her trademark bouffant hair, generous figure, liberal swearing and raucous Cockney laugh—said it was “an absolute honor” to perform, but also “of course nerve-racking.”

Four months ago, the singer-songwriter had announced, “heartbroken,” that she was canceling her sold-out US tour due to a hemorrhage she likened to a “black eye” on her vocal cord.

“Singing is literally my life,” she wrote on her blog. “It’s my hobby, my love, my freedom and now my job. I have absolutely no choice but to recuperate properly and fully, or I risk damaging my voice forever.”

“21” topped the 2011 year-end charts in Britain, the US Billboard 200 and lists in other countries including Canada, Australia, France, Germany and The Netherlands.

Love songs are for everyone

Despite her success, Adele remains unaffected and close to her roots.

She has been unflappable in the face of a controversy over her weight, after haute couture designer Karl Lagerfeld suggested that she’s “a little too fat.” Her reply is that she refuses to conform to the industry’s standard of what a pop music diva should look like.

“I don’t want people confusing what it is that I am about,” she said.

Record Of The Year: “Rolling in the Deep” – Adele

Song Of The Year: “Rolling in the Deep” – Adele and Paul Epworth

Best Rap Song: “All of the Lights” – Kanye West