Behind the scenes of an ‘Annebisyosa’ dream | Inquirer Entertainment

Behind the scenes of an ‘Annebisyosa’ dream

I had a shoot with Sarah Geronimo that day, and while waiting for makeup, I checked my Twitter. As of 9 a.m., all tickets for the Anne Curtis concert had been sold out. The only ones left were standing-room tickets. People were even texting and Tweeting me to ask if I could get them in.

I smiled. I remembered the night I was talking with Anne at Derek Ramsay’s birthday party. She was nervous that she might not be able to fill Smart Araneta for the concert; I made a bet that she could. She shook my hand, and the bet was on.

As soon as I wrapped up my shoot, I went straight to AFP Theater, where the rehearsal of “Annebisyosa the World Tour Concert” was being held. I wanted to see how Anne was holding up two days before the concert.

My crew and I arrived at the theater around 6 p.m. From outside the theater, I could already hear the sound of rehearsals. I wondered who it was, because I was hearing two voices. As I entered the dark theater, my eyes slowly adjusted to the sight of a band on stage and someone holding a pink guitar, who sang her heart out. Who else would it be but Anne.

And on her left was none other than Rico Blanco himself, and accompanying them, Ira Cruz. You should have seen the faces of the swooning girls in the audience. But Anne herself held her ground. She performed like she had been doing this forever. 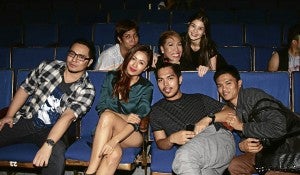 THE WHOLE barkada during a rehearsal break

After a two-minute break, Vice Ganda came on stage and did his number with Anne. Our mouths were hanging as Vice rendered a beautiful, soulful rendition of “Get Here” for Anne.

I had just missed Derek and Christine Reyes doing their numbers for the concert, and the last one for the night was Sarah. Anne was busy singing a song when Sarah walked in. And when Anne ended, Sarah herself stood and applauded. Finally, Sarah did her number, and I was floored! The girl is so good. I am at a loss for words to describe what a brilliant performer she really is.

Finally, director Rico Gutierrez called for a final run with costumes. Anne went back to the dressing room to don her costume for the opening number. Five minutes later, she reappeared on stage, ready. She opened with “Only Girl in the World.”

After the song, we were all surprised when she broke down. She was crying, and we were speechless. Yes, the combination of a dream come true, the tension and the excitement brought tears to her eyes. We all became emotional because we love her, and this was what she had always wished for.

Friday, Jan. 27—one day before the concert. I had a shoot in the studio with Carla Abellana, and Pam Quiñones was our stylist. Being one of the stylists for the concert, I asked how the production was going. Pam said there were more requirements that needed to be delivered.

Apparently, the plan was to do technical rehearsals on Saturday because there was a basketball game before the concert, so ingress would be later than expected. Question was, will there be enough time for preparations?

Saturday, Jan.  28—The day of reckoning had arrived. I proceeded to Araneta around 5 p.m. to catch last-minute preparations. The harness was being tested for safety. The dancers were blocking on stage and Anne was there with her pink guitar. The stage design was fantastic. June Rufino was busy overseeing the last-minute details for the concert.

Backstage, the boys were all in one room. I found Derek glued to his phone playing Temple Run. Luis Manzano was on top of a massage bed resting, while Liz Uy and Vhong Navarro were sitting beside him, goofing around. Rajo Laurel, who provided the gowns for Anne and Sarah, entered wearing a specially designed T-shirt of Anne’s concert that I was envious of. I wanted one for myself!

On the other side, in contrast to the boys’ room, the girls’ dressing room was filled to the brim with costumes, makeup family, friends, and well-wishers. I went out to check the audience. I wanted to see if Anne could really fill the Dome. And to my surprise, there was already a long queue at the gate.

Tension rose when someone mentioned the gates would open soon, and Anne was still rehearsing. But June just shrugged her shoulders and smiled. When people started filling the upper box seats, all the talents, including Anne, went backstage to prepare.

The whole place was filled to the brim! She did it! For someone who had no singing career before this, this was unimaginable. I remember her telling me in one of the conversations in a party that she never took her singing seriously. But who would have imagined it would come this far? 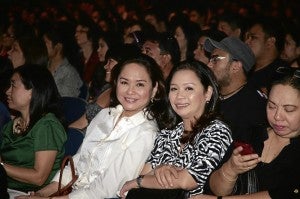 As expected, the crowd grew restless with anticipation waiting for their idol to come out. As the countdown on the video screens started, the screams got louder. And with the first bars of the music, the lights on stage suddenly dimmed. The screams became deafening as the dancers opened a panel of a gigantic microphone on stage.

Inside, the star of the show, in a beautiful sequined piece, sang “The Only Girl in the World” by Rihanna. She was ready to conquer the stage and the world. The show was a feast for the eyes and the soul. The production numbers were well-planned and thought-of. There was an exchange of energy between the performers and the audience.

At the end of the day, it’s not about how the concert went or whether it was worth my money and time. The whole concert was a testament to the fact that dreams do come true.

She knows she can’t sing as well as the good singers, and she never hid that, in fact. But she did it. Which means that if Anne can dream it, so can you and I, and who knows—that dream just might come true. After all, it’s those who dream big who make it big.