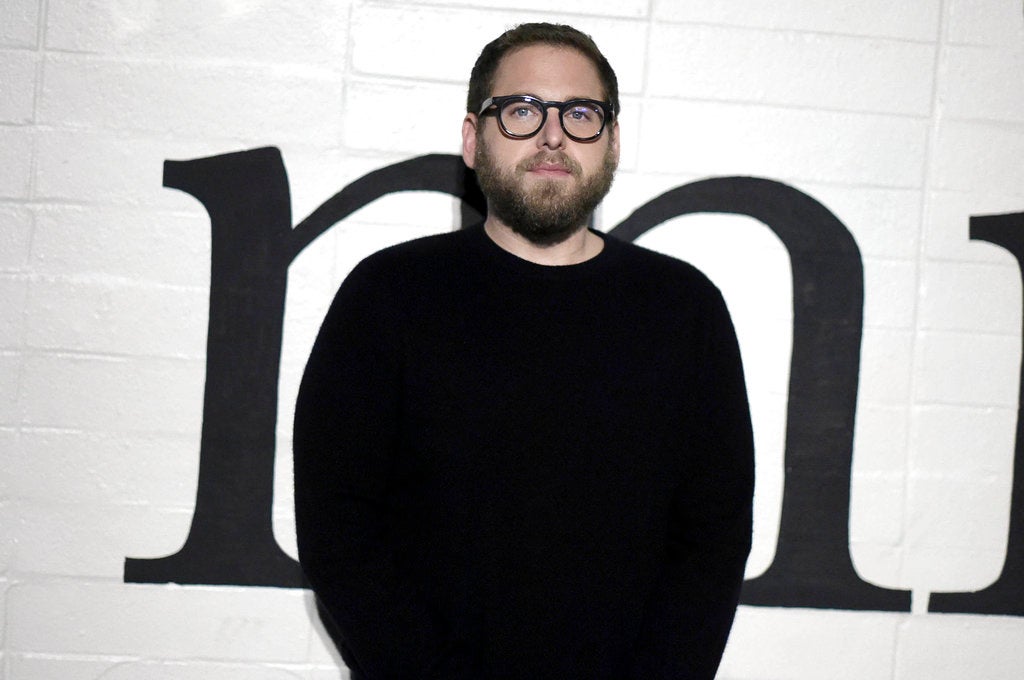 LOS ANGELES (AP) — Jonah Hill has always wanted to direct. He worships filmmakers and has treated what he describes as an “accidental” but “wonderful” 15-year acting career as a partial film school, learning from people like Bennett Miller, who directed him in “Moneyball” and Martin Scorsese on “The Wolf of Wall Street.” But Hill didn’t just want to make any film, he wanted to have something to say, and the confidence and “emotional maturity” required to lead people.

He settled on a coming-of-age story, which he laughs is a “tried and true” formula for a first film. It’s about a 13-year-old boy, Stevie (Sunny Suljic), growing up in Los Angeles with a single mother (Katherine Waterston), an abusive older brother (Lucas Hedges) who finds solace (and quite a bit of trouble) with bunch of local skateboarders (newcomers Na-kel Smith, Olan Prenatt, Ryder McLaughli and Gio Galicia).

It took Hill three years to write “Mid90s” which is now playing in limited release before it expands nationwide. For the shoot, he and his crew painstakingly recreated the mid-90s Los Angeles he remembers, from the music, to the clothes, the talk and even the trash. “A Doritos bag has a wildly different shape and aesthetic now than it did in 1995,” Hill says. 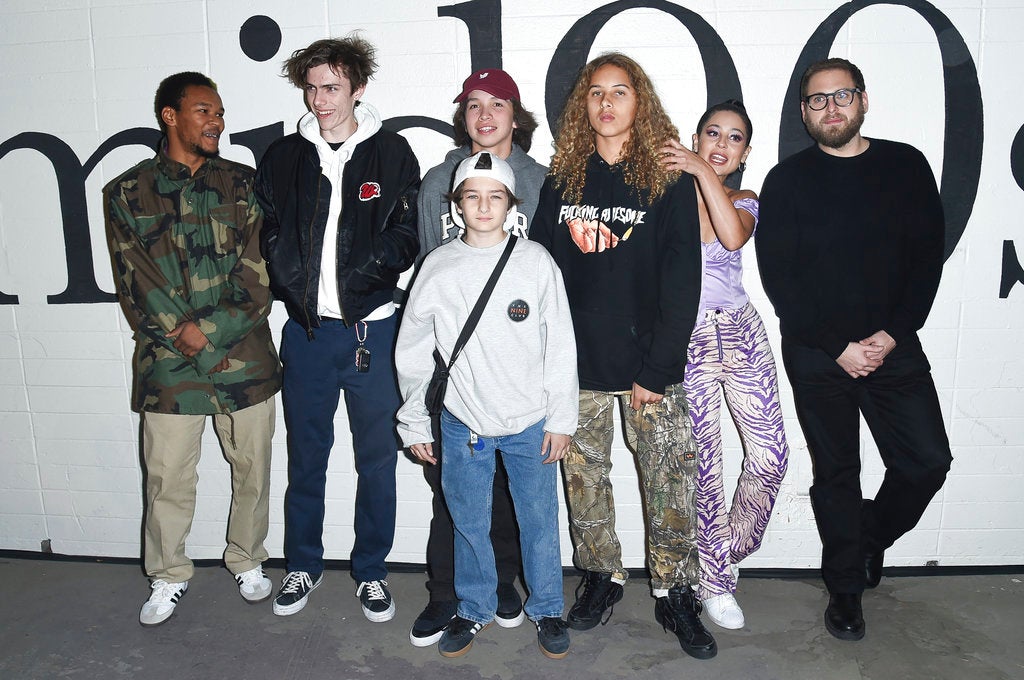 Hill spoke to The Associated Press about the film and what he was trying to say. Remarks have been edited for clarity and brevity.

AP: What was the genesis of this idea?

HILL: Well, I grew up skateboarding in the mid-90s in Los Angeles. It is in no way a biopic or an autobiography, but I knew skateboarding would play in some way into my first film because although I was terrible at it, it was something that came into my life when I really needed it and really gave me a lens that I saw most things through, even when I went into comedy or film, it’s subversive, it’s anti, it’s punk, its sense of humor, taste in music, attitude toward authority (laughs). And to me skateboarding is always butchered in film. It’s always done stereotypically, made by people who weren’t from the culture a lot of the time.

AP: How did you settle on Sunny for the lead? 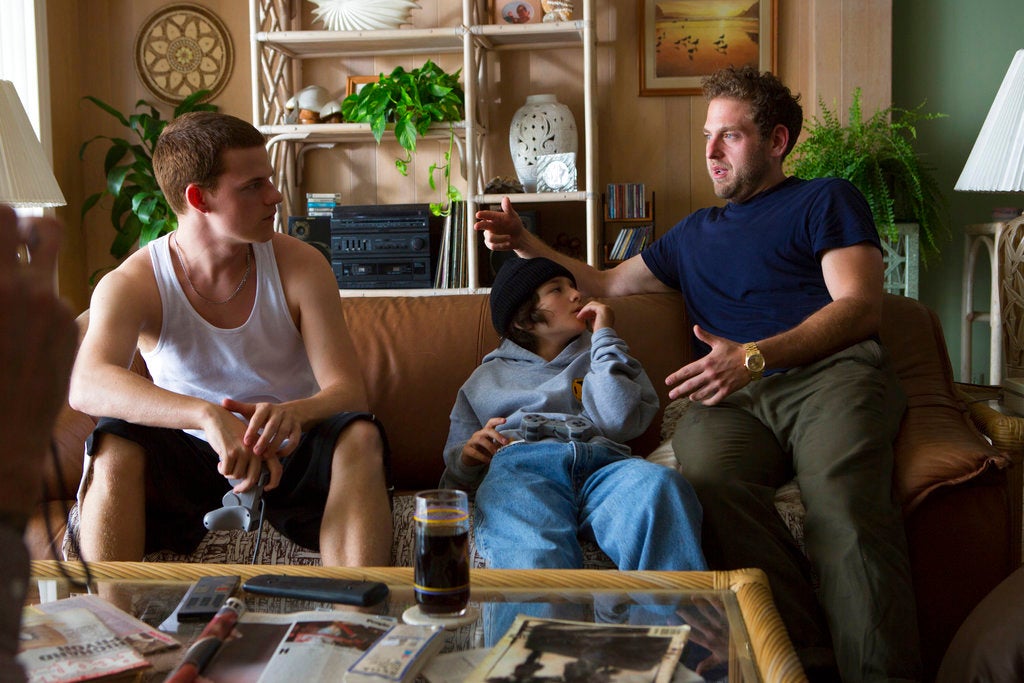 This image released by A24 shows writer-director Jonah Hill, right, with cast members Lucas Hedges, left, and Sunny Suljic during the filming of “Mid90s.” Image: Tobin Yelland/A24 via AP

HILL: He had the exact quality I was looking for which was someone who was very young for their age but who was 10-feet-tall inside. He was the first kid we read and after he did this scene (of yelling at his mom in the car), everyone was like, oh this isn’t just a good child actor, this is a great actor of any age or gender. He was 11 when we shot. I’m 34 and have been acting for 15 years and have never had to strap a movie on my back and walk across the field with it and he did it at 11. He’s a freak of nature. He’s remarkable.

AP: I feel like I certainly learned something about how teenage boys are together from this film.

HILL: These kids speak in a way I don’t agree with, they treat women in a way I don’t agree with. But they also are very much there for one another. There’s good and bad to people. It’s not black and white. And things like homophobia and toxic masculinity and treatment of women, even though I don’t agree with these things, they were things I noticed growing up that I wanted to show as unflinchingly as possible so people could decide for themselves where they fall on that line. To me, it’s really ugly and it’s really hard to watch a lot of it. That’s by design. And I think it’s interesting to watch it with a crowd of people. You do see people laughing at moments I never would have expected or flinching at moments and it’s important to see the truth even if it sucks.

And there’s s the example of Steve’s first sexual experience. I wanted to show how terrified he was and the only moment that becomes enjoyable to him is when he realizes it’s currency to rise up in the animal kingdom of his friends…those were lessons I saw growing up that we clearly as a society are having to unlearn.

AP: So this is a commentary on masculinity?

HILL: Yes. I’m someone who is highly sensitive and emotional and has come a long way in my life in a sense of learning who I am and a sense of being able to communicate my feelings thoughtfully and openly. And part of the humor, part of the harshness, part of the ugliness, part of the joy is watching these people who cannot communicate with one another. And ultimately they teach each other lots of bad lessons and lots of good lessons. And bad and good is not up to me, it’s up to the individual watching. I have my own feelings, but I don’t like moralist filmmakers. I don’t want to be one. I don’t want to be shoving my views down everyone’s throats. “Wolf of Wall Street” is a great example where people thought (Scorsese) was celebrating our characters. I can speak for myself, I thought those people were terrible, but you know, (Scorses’s) like, it’s not my job to do that.

AP: Why did you focus in on a lower-class setting?

HILL: Skateboarding for myself, personally, it broke me out of a socio-economic bubble that I would have stayed in my whole life. And skateboarding, like a lot of things, unifies people, it’s common ground. NVG

Terry Crews on toxic masculinity and his story of sexual assault