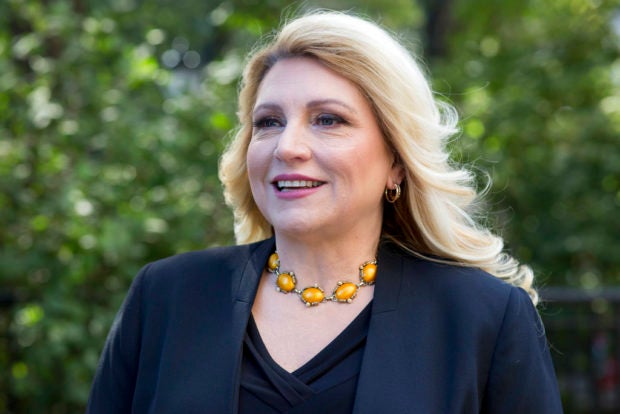 Radio personality Delilah poses for a portrait in New York on Thursday, Oct. 18, 2018, to promote her memoir, “One Heart at a Time.” Image: AP Photo/Mark Lennihan

She took some time away from her job to grieve but is now back on the air and also has a new book out called “One Heart at a Time,” sharing personal stories and life lessons to hopefully inspire others to examine their own lives and find purpose about what really matters.

Delilah, who also lost her son Sammy in 2012 at 16 from complications from sickle cell anemia, has raw advice for people on what not to say to parents who lose their children.

She continued: “Don’t say to somebody who has lost a child, ‘Well, they’re a little angel now looking out for you.’ My son is not a little cherub floating. He wasn’t a cherub here on Earth, for God’s sake. You know, he was a wild child. He was passionate and he was crazy.”

So what do you say when you want to say something to a grieving person?

“Just say, ‘I love you,'” she said. “‘What can I do for you? Can I pick up the kids after school? Can I take you out to dinner? Can I bring dinner to you if you don’t feel like leaving the house?'”

Suicide rates for teens rose between 2010 and 2015 after they had declined for nearly two decades, according to data from the federal Centers for Disease Control and Prevention. Why the rates went up isn’t known, but Delilah said talking about it might help.

“We’re talking a lot more about things that used to be hidden or shameful but we need to talk about this epidemic,” she said. “There are three kids in my community who took their lives within a few months of each other.”  MKH

Ellen Page, celebs heartbroken over boy who killed self due to homophobic bullying

The Department of Health has opened a hotline, named Hopeline, for those going through depression or other mental health issues.