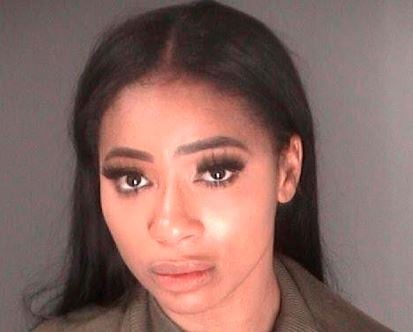 This July 9, 2018, file photo, released by the Atlanta City Detention Center shows Atasha Jefferson, better known as Tommie Lee, from the reality series, “Love and Hip Hop: Atlanta”, after her arrest in Atlanta. Jefferson was arrested again on Tuesday, Oct. 16, on assault and child cruelty charges. Citing a Smyrna police warrant, WSB-TV reports she shoved her child’s head into a locker at a middle school. Image: Atlanta City Detention Center via AP

ATLANTA (AP) — Two stars of this past season of VH1’s “Love & Hip Hop: Atlanta” have been arrested in separate incidents in metropolitan Atlanta.

Atasha Chizaah Jefferson, known as Tommie Lee, was arrested Tuesday on assault and child cruelty charges. Citing a Smyrna police warrant, WSB-TV reports the 34-year-old shoved her child’s head into a locker at a middle school.

She was released on bail Wednesday. Cobb County detention records indicate she was arrested again that night on charges including aggravated stalking. It’s unclear what those charges concern. Jail records didn’t list an attorney.