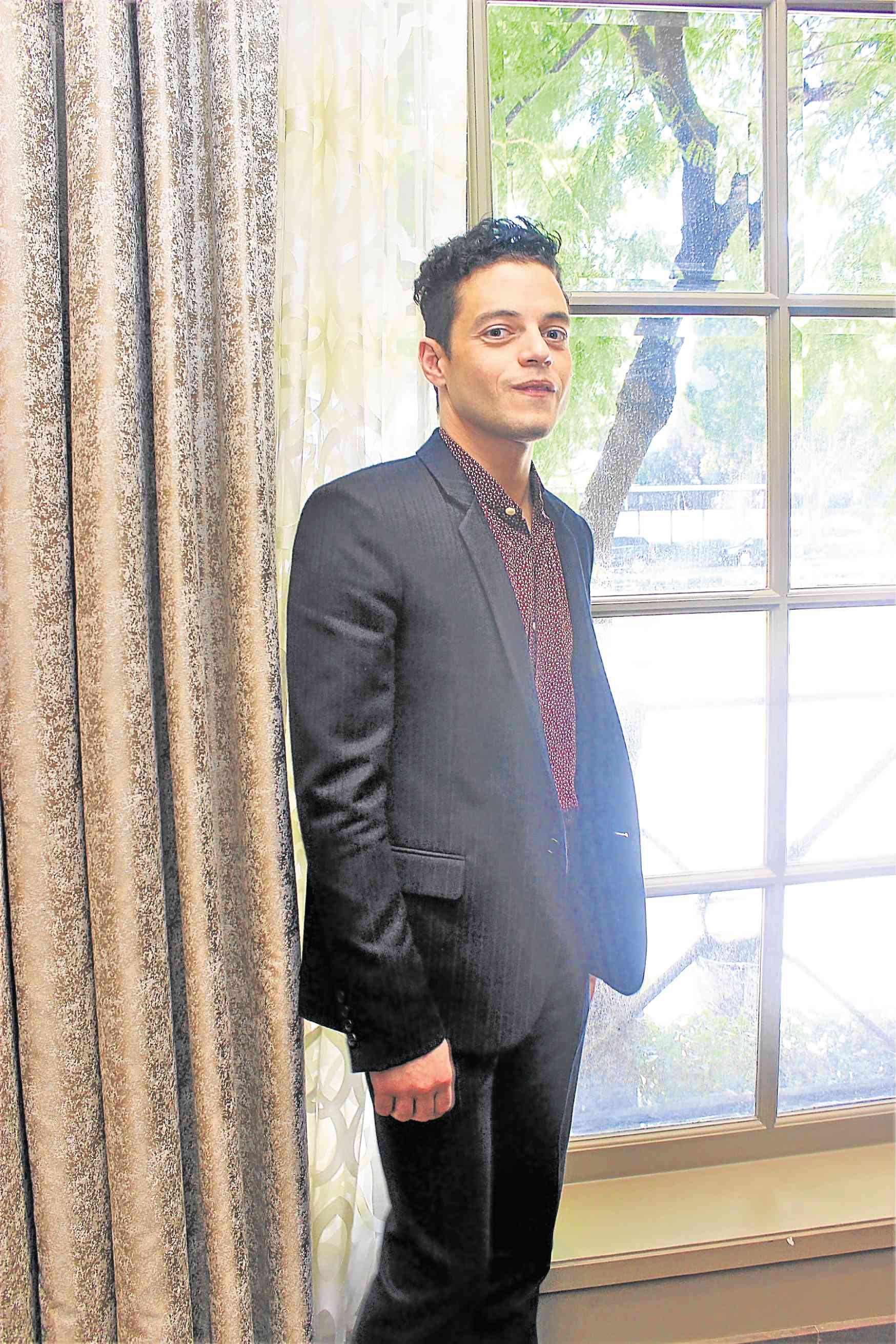 LOS ANGELES—Rami Malek did it. The Freddie Mercury role he passionately pursued is done. And the verdict? He absolutely rocks as the Queen’s flamboyant lead singer in “Bohemian Rhapsody.”

Onstage  and off, but especially when he’s performing the Queen’s rock anthems, Rami succeeds in capturing the dynamism and stage presence of Freddie. Especially in the film’s recreation of the band’s rousing performance in “Live Aid.” The film begins and ends with that 1985 benefit concert at the Wembley Stadium.

Chronicling the years from the Queen’s formation to “Live Aid,” “Bohemian Rhapsody” also dramatizes Freddie’s relationship with his family, bisexuality (his lovers Mary Austin and Jim Hutton are played by Lucy Boynton and Aaron McCusker), and death from AIDS.

Born Farrokh Bulsara of Parsi heritage in Zanzibar, he moved with his family to England where he formed Queen and coined his new name, Freddie Mercury.

While Bryan Singer was fired as a director due to  clashes with the cast (including Rami) and crew, he retains his directing credit as per Directors Guild of America’s rules. Dexter Fletcher took over with about two weeks of photography left.

Wearing a dark Ralph Lauren suit  at the Four Seasons Los Angeles, Rami was teased about his sedate wardrobe choice, a huge contrast from Freddie’s bold costumes. “Well, I can’t be Freddie Mercury every day,” he quipped. 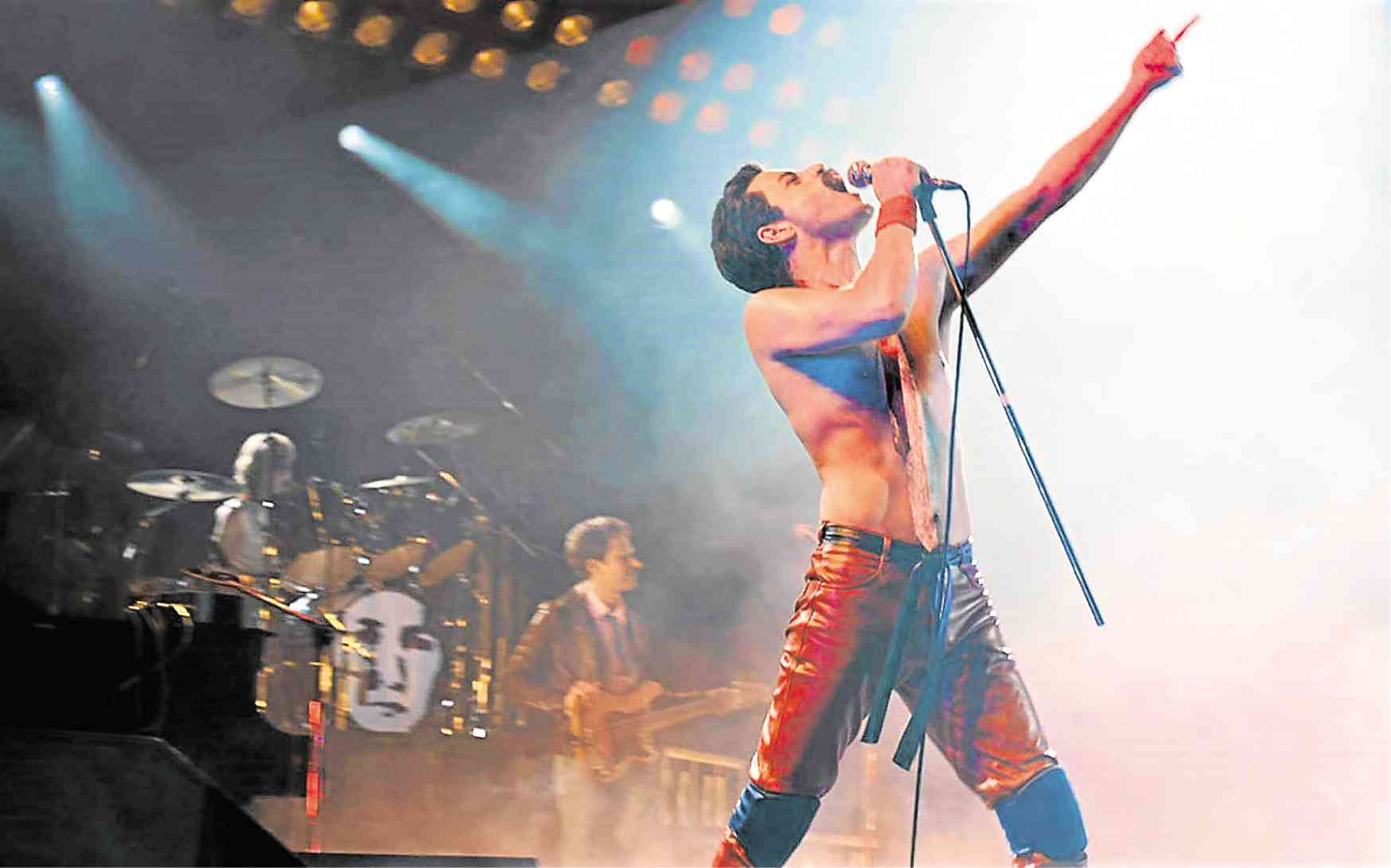 Malek on Mercury: He also had a beautiful life as a bisexual. —Photo by 20th Century Fox

It’s fascinating that the first scenes you shot were the “Live Aid” concert numbers. Did you already feel like you were Freddie Mercury then? I can never say I ever felt 100 percent him. There were times when I would catch a glimpse of myself and say, oh that’s nice … because I can see someone reflected back at me that felt like someone I was truly emulating. Coming out on that stage is a feeling of absolute euphoria and elation. I had worked so hard to prepare for that moment that I felt like I owned it to some degree. But I think even Freddie walking on that stage was nervous and he knew how to hide it well.

So, anytime I had any doubt, I would say … Freddie could always persevere and find a way to step outside of that and just own who he was, own that audience, hold them in the palm of his hand. I tried every day just to do the same.

How did you feel when you were performing in front of all those people? We shot a different song every day. But on the last day, we did the entire concert.

I realized that when we had the cranes and cameras all around us onstage, I had an adrenaline rush. Then, with even more people in the audience, there was another sense of that.

How did you handle the sexuality aspect of Freddie? It was something I toiled over every day—how do we approach this? Obviously, we want to celebrate his life and tell every aspect of it, and his sexuality is a major aspect. He was coming into his own sexually at a time when there was a massive stigma about it. So every day, we thought about doing him justice and honoring his story.

And a large part of that story is that he had a great relationship with this woman named Mary Austin who he proposed to.

But he also had a beautiful life as a bisexual, and there are moments when you get to see that. I wish we could have spent more time on that, too.

We have a two-hour film and you try to give a piece of every part of his story so that we can celebrate how indelible he was as a human being.

Many people thought that Freddie did all the voices in “Bohemian Rhapsody.” But the movie shows all the band members recording that song. Freddie had a four-octave voice, but there were times when Roger could hit notes that Freddie himself said only a dog could hear (laughs).  Roger’s character, played by Ben Hardy, says, if I sing any louder, only dogs will hear.

What did you find out about the kind of music  Freddie listened to? He loved Jimi Hendrix. We both loved David Bowie, so I love “Under Pressure” because it’s a collaboration of two of my favorites. He adored Aretha Franklin and opera. He did an opera album with Montserrat Caballe.

And another person he loved was Liza Minnelli. That was where a lot of his physicality came from. He watched “Cabaret” and the choreography of Bob Fosse.

When you saw the finished film for the first time, what was your reaction? Graham (King, producer) told me early on, I think we have something really special, buddy.

What do you think did his family mean to Freddie? In “Bohemian Rhapsody,” he sings, “Mama, I just killed a man.” I think he was saying that the guy you knew, the little kid, is never going to be quite the same as you remembered him.

Do you still feel connected to Freddie after the shoot? There are times with other characters when you are done shooting, you just want to disconnect and move on to the next one. Freddie is someone I never want to disconnect from.

Did you play the piano before? I never touched a piano before in my life. I got to do all of my own piano for this. It was like going back to theater school to prepare for this role. Because it was like at 11 a.m., I was in piano,  1 p.m. I was doing singing class and 3 p.m., I was in movement coaching.

Which of the flamboyant costumes did you have second thoughts on? I was worried about the sequined silver leotard. I asked the costume designer, do you think you could make me this in a different color?  It was ruby red.

How do you stay grounded? The gift that I have is that everything has been such a slow burn. Even when I did get the “Mr. Robot” job, I was still so thankful that I had considered myself a working actor. Getting to where I am now, it feels like the most incredible achievement. I still pinch myself thinking about being here.

What can you say about the firing of Bryan Singer? The work I had done on becoming Freddie was just something that gave me an immense amount of confidence. I was going to carry this through, no matter what. We were making a film about a human being who was one of the most passionate people you could run into.

So it was a very passionate set. I don’t want to take away from Freddie’s story and I want to celebrate his story. I can only reiterate that you have a lot of people trying to tell their version of Queen and Freddie Mercury. At times, our passions can run away with us a bit. That is what I can say.

But I held my own throughout this, just in terms of serving this man’s story.

With this experience of playing Freddie Mercury, are there words of wisdom you might have for Taron Egerton who is playing Elton John in “Rocketman”? I saw Taron in London before he started. I just told him there would be moments when you think you can’t do this, but just keep persevering because you will get through it. Just believe in yourself because I promise you that you will get through it.

And they have Dexter Fletcher there working (as director), as well. They also have our costume designer, Julian Day. So Taron is in very good hands.

How do you think you will respond later when you hear Queen? Will you go, my God, not again or will you continue celebrating Queen? As soon as we wrapped, all I did was listen to Queen for months (laughs). It’s odd, but I fell in love with the music and the group, especially Freddie.

There were days when I would just play songs on repeat over and over again.  That sounds crazy, but it’s true.