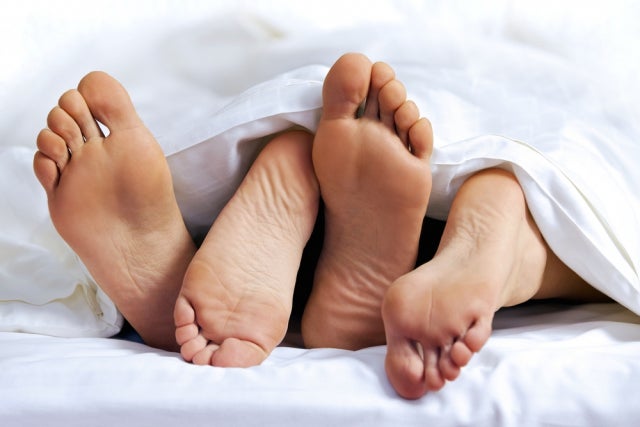 Once upon a time in a more coy era people made an effort to get to know each other — perhaps learning each other’s names — before hopping into bed together.

But for the swipe-right generation raised on dating apps like Tinder, that is so last century, television executives believe.

A new dating show is helping time-pressed millennials save on the unnecessary preliminaries by cutting straight to the chase.

“Making Love” has jaws dropping at MIPCOM, the world’s biggest TV market in Cannes, by having contestants have sex first before deciding if they like each other.

Its French producers WeMake said it has brought together “scientifically-matched singles” to ask the essential question, “Could making love make you fall in love?”

They billed the show, which is being sold at MIPCOM, as “a ground-breaking experiment into how humans fall in love.

“Behind the (bedroom) door cameras have captured the new couple’s every move, every awkward moment,” the producers said, before pulling away at the last minute only to reappear in the post-coital glow — or gloom.

Contestants can then hurry into the bathroom to debrief the audience on just how their new partner performed.

“We will follow the daters over the next few weeks to see if the pair remain friends-with-benefits only or will they chose to get to know each other and start a relationship,” the show’s trailer promised.

Although the producers are French, the contestants for the pilot show were British.

The format is one of several new series which are likely to pop up on TV screens across the globe in the next few years.

Analyst Virginia Mouseler of The Wit database said the new age of dating was not for prudes.

Another show called “Find My Body” has people guess which body part goes with the right contestant, with the winner taking his or her favorite out on a first date with the prize money.

The Spanish series “Forever or Never” takes a more realistic long-term view, using movie make-up to imagine what young lovers might look 20 and 30 years down the line.

Parents and grandparents come along on dates so future sons- and daughters-in-law can get an educated guess of what they might be getting.

Another Spanish show “Ex-to-Be” has couples in crisis being sent on three dates with people who have all the qualities that they say their current partners lack.

Holograms from the dead

It all might have turned out differently if they had been taken in hand by “Flirty Dancing”, the new show from the British broadcaster Channel Four.

“Most of our grandparents met in dance halls,” Mouseler said, and the show tries to reignite that old magic by teaming contestants with a dance coach.

They then meet on the dance floor to see if it will be “love at first dance” — with contestants banned from talking or whispering sweet nothings in each other’s ears.

It is one of a huge wave of dance-based shows which are about to flood the small screen, Mouseler said.

The BBC’s “Dance to the Music”, the Belgian “Dance as One” and the spectacular French Canadian format, “Dance Revolution”, are all basically dance offs.

But the French show “Dance Stories” takes the idea a step further by having people work with dancers and choreographers to create their own dance piece “to express to their loved ones what they cannot say in words.”

The first series includes a tribute by a survivor of the Paris terrorist attacks to the firefighter who helped save her, and a man apologizing to his children for working too much and not being there for them.

But the most moving of all the new formats at Cannes is a British show called “Voices from the Grave”, where people with terminal illness leave hologram messages for their children and partners to say all the things they could not when they were alive.

The “messages to the future” included a mother’s birthday greetings to her children as they grew up without her. NVG