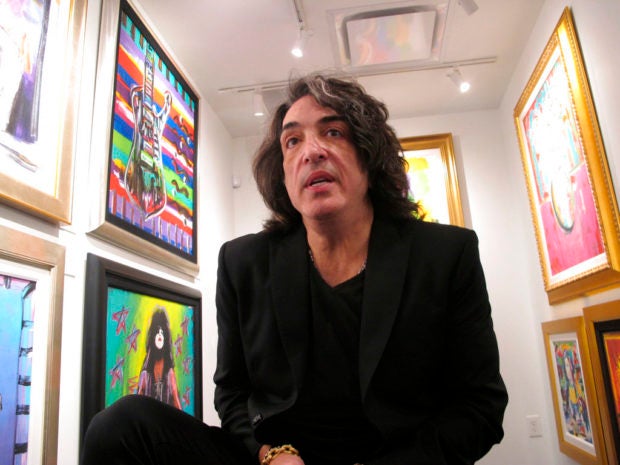 In this Oct. 13, 2018 photo, Paul Stanley, singer and guitarist for the rock group Kiss, speaks during an interview among his artwork at a gallery in Atlantic City, N.J. Stanley said he is open to the idea of former Kiss members performing as part of the band’s upcoming farewell tour next year. Image: AP Photo/Wayne Parry

ATLANTIC CITY, New Jersey  — It won’t be all night, but former members of Kiss might get the chance to rock ‘n’ roll with the band one last time.

In an interview in Atlantic City where he was promoting his artwork, Stanley told The Associated Press the band’s “End of the Road” world tour starting next year could include appearances by former members. He did not single out anyone by name, but living ex-members are guitarists Ace Frehley, Vinnie Vincent and Bruce Kulick, and drummer Peter Criss.

Since the tour was announced last month, Kiss fans have been clamoring for a farewell that includes former members.

“I wouldn’t discount any possibilities,” said Stanley, who plays the Starchild character in the band. “I learned long ago to never say never. Would I negate the possibility of former members making appearances? Absolutely not. I don’t know in what capacity.”

Stanley then went on to extol the virtues and stability of the current lineup: himself, bassist and vocalist Gene Simmons; drummer Eric Singer and guitarist Tommy Thayer, calling it “the crux and the core of the band on tour.”

That lineup is already rehearsing the farewell show, even as its elements remain undecided. Stanley said the set list will be expanded from the recent 16 songs to 25, adding the band has “thrown away every piece of hardware that we used on any of the previous tours and created a completely new show.”

Formed in 1973, Kiss did a farewell tour in 2000 with the original lineup of Stanley, Simmons, Frehley and Criss. Yet within a year, Simmons and Stanley decided to keep the band going, promoting guitar tech and band assistant Thayer to the role of full-fledged lead guitarist, and bringing back Singer, who first drummed with the band following the death of Eric Carr in 1991 through the 1996 reunion tour of original members.

Tensions within the band soon resurfaced in 2000.

“In the emotional state that we were in, we thought that it’s better to put down the horse rather than nurse it back to health,” Stanley said. “We in essence threw the baby out with the bath water.”

Those tensions are never far from the surface when former Kissers get together — and could still scuttle a last hurrah for them, despite everyone’s best intentions.

“There are personalities and histories and things that may make it impossible to spend a romantic evening with your ex-wife,” Stanley said.

Speaking of ex-wives, Stanley started painting several years ago while in the midst of a divorce.

“Anyone who’s been through a divorce probably spent a lot of time either banging their head on the wall or crying a lot,” Stanley said. “It’s a very tumultuous time. My best friend said to me, ‘You should paint.’ I never painted. But my life is pretty much built on the premise of ‘why not?’ instead of ‘why?’ I had no idea how or what I was going to do. And I started painting.”

His pieces include self-portraits, paintings of fellow Kiss band members, as well as Jimi Hendrix, Marilyn Monroe, and more abstract art. It’s heavy on bold color and simple in brush strokes and design.

He has sold over $10 million (almost P539.5 million)  worth of art through the Wentworth Gallery in the past five years. MKH

Police search of home of Gene Simmons, but he’s not suspect